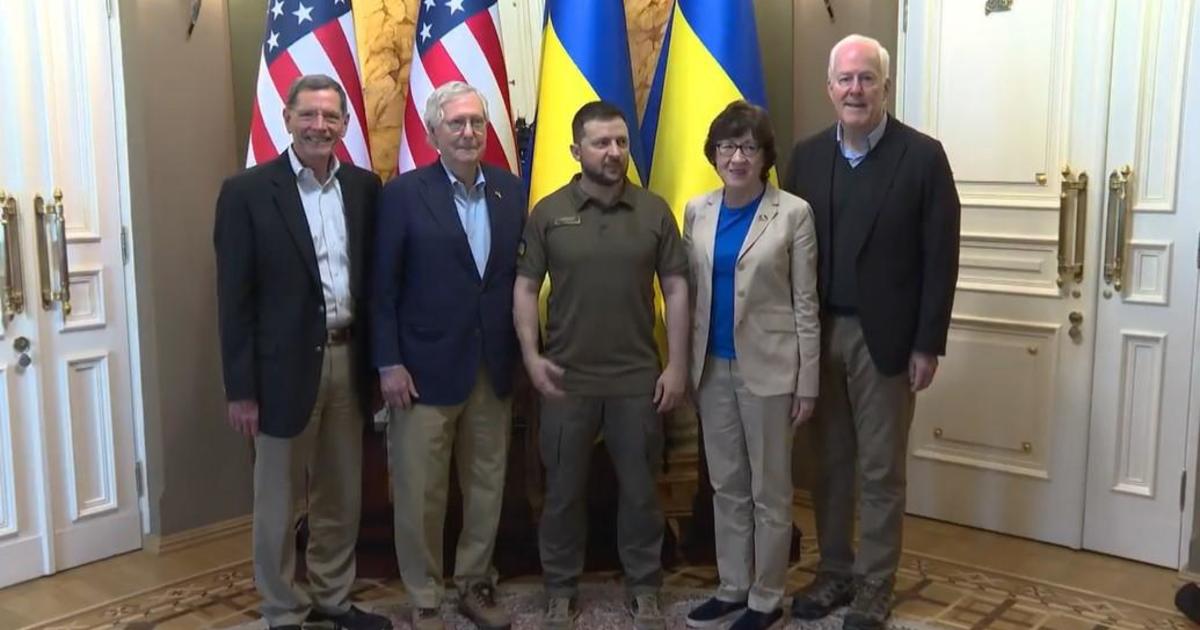 The U.S. Embassy tweeted about the senators’ visit to Ukraine Saturday and posted video of their meeting with Zelenskyy.

“Welcome to Ukraine,” the translated tweet addressed the senators. “We are together with Ukraine.”

McConnell, in a statement Saturday evening, called it “an honor” to have met Zelenskyy and his top advisers and to “stand in solidarity with the heroic people of Ukraine.”

“It was inspiring to visit the historic capital of a beautiful country that has been forced to fight for its own survival. We saw firsthand the courage, unity, and resolve of the Ukrainian people. The Ukrainians are fighting bravely against a deranged invader and have already succeeded beyond skeptics’ wildest dreams,” McConnell said. “They are willing and determined to keep fighting to victory. Ukraine is not asking anybody else to fight their fight. They only ask for the tools they need for self-defense.”

The Senate minority leader said the Republican senators reaffirmed to Zelenskyy that the U.S. “stands squarely behind Ukraine and will sustain our support until Ukraine wins this war.”

And he called on U.S. allies to continue to do their part, as well. McConnell also said that the pressure the U.S. and allies are bringing to bear on Russia is directly tied to U.S. national security.

The senators travelled to Ukraine days before the Senate is expected to pass a $40 billion package of military and humanitarian aid to Ukraine. The bill has broad bipartisan support and has already been passed by House.

This was the latest recent trip by top U.S. officials to the war-torn country. Last Sunday, first lady Dr. Jill Biden made a surprise trip to Ukraine, meeting with the first lady of Ukraine Olena Zelenska and visiting with Ukrainian children who have been displaced by the war with Russia. Biden crossed the border from Slovakia into southwestern Ukraine for her unannounced visit to a public school in Uzhhorod that was converted into a temporary shelter, housing 163 Ukrainians, including 47 children.

Secretary of State Antony Blinken and Defense Secretary Lloyd Austin also traveled to the capital city of Kyiv in April, and a delegation of House Democrats led by House Speaker Nancy Pelosi made a secret trip to the capital earlier this month and met with Zelenskyy.