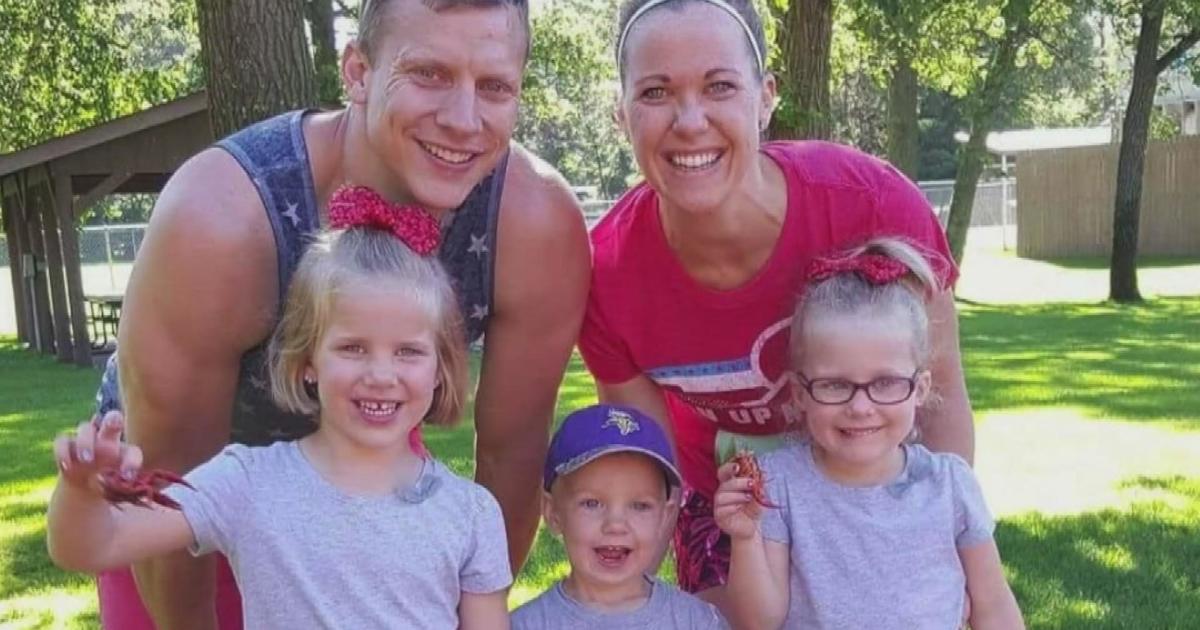 ROSEMOUNT, Minn. — Father’s Day is a day of celebration for many.

But for some who miss their dads it’s a tough day. A Rosemount family took their pain and turned it into something beautiful.

It started as a Minnesota fairytale. Jillayne Lazer was home for the summer from college visiting friends in Hastings when she met the one.

“Jared was a goofy guy. He walked over that night and brought a plate of pancakes over and so we had pancakes,” she said.

They decided to share pancakes for life. And the table got bigger. They had twins and one more.

“Jared’s a very, very good dad. All about the kids, always doing fun things with them,” Lazer said.

Lazer said she loved Jared even more when she saw him as a dad.

But in 2018, on the very weekend meant for honoring dads, their beautiful dream was eclipsed by a nightmare.

It happened right after a summer day full of family parties.

“We were just on our way back home, big, wide open, country road. We had all three kids in the car, and the stop sign was ran,” Lazer said.

She woke up on Father’s Day to find out the best dad she knew was gone.

“I just remember a very faint moment where a nurse had said to me like, ‘I just want to remind you what happened,'” she said.

She and one of the kids were in the hospital for a week, hurt pretty bad. But nothing would compare to the pain that filled their hearts.

“There were several times after that where it would just hit me and become a reality. It still does, to this day, or it’s kind of like, oh, that really happened,” Lazer said.

She went into survival mode. Parker was only 3. Audrey and Peyton were about to start kindergarten.

“Just really trying my very best to do what I could to keep Jared’s memory alive,” Lazer said.

“It was a very, very crazy surprise,” she said.

Thanks to some strangers with the group called Best Christmas Ever.

“We walked outside and two fire trucks pulled up with some of the first responders that were there that day.  I don’t know where she got that but she nailed it, exactly what I needed that Christmas,” she said. “I knew that I had to do the same, not only for myself, but for my kids.”

The very next Christmas Lazer became a Best Christmas Ever captain, providing a full-out donated extravaganza for another newly single mom.

“Just to see a smile on their face. I know what they are going through and I know that maybe that was a really hard day for them,” Lazer said.

She has been doing it every year since. Her daughters have raised $800 themselves by selling bracelets.

Also proud is the head of Best Christmas Ever, Don Liimatainen.

“Somebody was able to take, again, one of the worst things that you could possibly think of happening and turn it into over $70,000 for families all over, to be a force for good,” Liimatainen said.

So whether Christmas Day or Father’s Day, Jared’s legacy of love and laughter is living on.

Best Christmas Ever is hosting a big golf tournament in September to try and raise money. They’re looking for people to become team captains to help more people who are experiencing the worst time in their lives get the best Christmas ever. Click here for more information.

Susan-Elizabeth Littlefield loves sharing the good news. She hosts a show on Sunday mornings based on local “positivity and empowerment, ” leading right into CBS Sunday Morning.