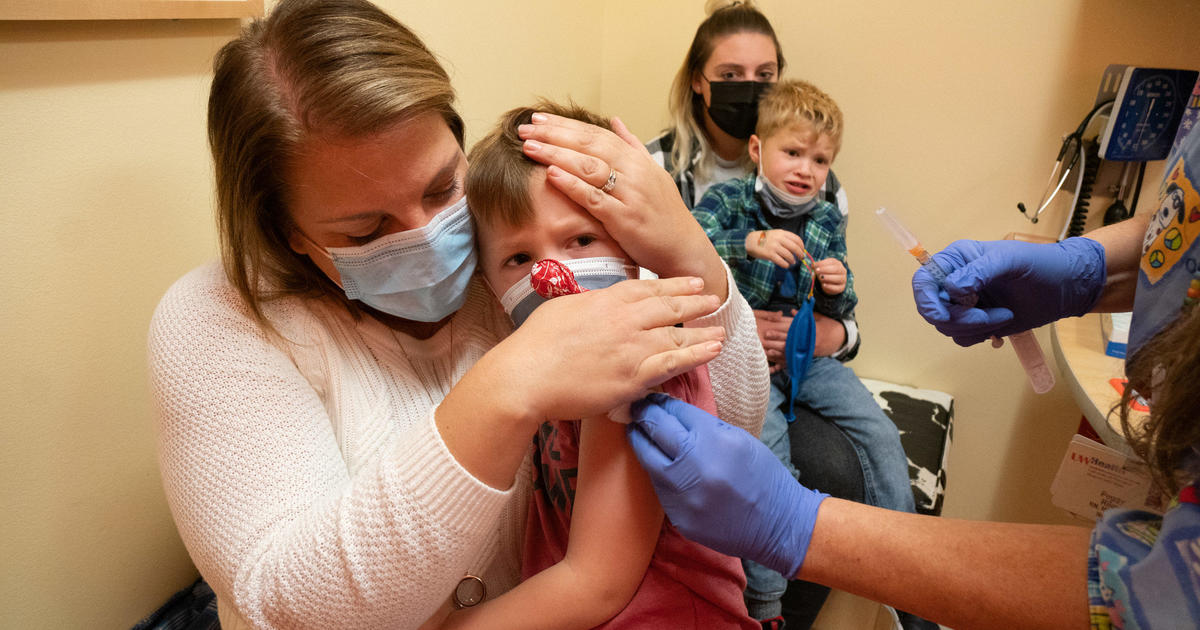 Moderna says it has formally submitted a request to the Food and Drug Administration for authorization of two doses of its COVID-19 vaccine in children younger than 6 years old, kicking off a long-awaited federal review process that could soon greenlight the first immunizations for these youngest Americans.

“We believe mRNA-1273 [the Moderna vaccine] will be able to safely protect these children against SARS-CoV-2, which is so important in our continued fight against COVID-19, and will be especially welcomed by parents and caregivers,” Stéphane Bancel, Moderna’s CEO, said in a statement.

Moderna’s request is based on data the company first touted back in March studying two 25-microgram doses of its vaccine in the age group. Those doses are smaller than the two 100-microgram doses given to adults.

The company says that in testing the shots among two groups of children — 6 months old to 23 months old as well as 2 years old to under 6 years old — they found a “robust neutralizing antibody response” and a “favorable safety profile.”

In a preliminary analysis of lab tests collected during the Omicron wave, Moderna says its vaccine efficacy against infection was 51% among children younger than 2 and 37% among children from 2 to 5 years old.

Next steps: How long will it take?

Moderna’s move marks the biggest tangible step in the process of getting vaccines ready for young kids since the FDA postponed a planned meeting of its outside vaccine advisers to discuss the issue back in February.

At the time, officials had been preparing for the possibility that two doses of Pfizer and BioNTech’s COVID-19 vaccine formulated for the youngest kids could be rolled out by the spring.

But following a disappointing showing in the immune response triggered by two doses of their vaccine among the youngest children, the companies are now waiting for results from three doses, which they say they expect will offer “a higher level of protection.” Data is expected from that clinical trial by this June.

Moderna also says it is working to expand its own booster shot studies to evaluate a third dose in children as young as 6 months old.

As with older age groups, the FDA must now work to vet Moderna’s submission before granting emergency use authorization. After that, the Centers for Disease Control and Prevention must also sign off on updated recommendations before the shots can be given out, under federal supply agreements governing use of the shots.

Spokespeople for both agencies say they plan to convene a meeting of their outside vaccine advisers before clearing the shots.

The FDA’s top vaccines official, Dr. Peter Marks, told a Senate hearing on Tuesday that the agency would release over the next week a “tentative” schedule for their Vaccines and Related Biological Products Advisory Committee meeting.

However, the company must first finish its submission to the FDA, forking over reams of data on its clinical trials and manufacturing. Moderna says their submission “will be complete next week.”

The entire process of clearing Pfizer-BioNTech’s shots for kids ages 5 and up took around 27 days to complete last year, from when they submitted their request on October 6 to the CDC director signing off on the updated recommendations on November 2.

However, federal health officials have cautioned that clearing Moderna’s shots might not happen as quickly.

In an interview with CNN last week, asked about reports that the FDA might delay its decision over Moderna’s submission, the president’s chief medical adviser Dr. Anthony Fauci said that regulators wanted to avoid confusion between the two vaccines being greenlighted within weeks of each other.

“So it’s going to be two separate companies, two products that are similar, but not identical, particularly with regard to the dose. And what the FDA wants to do is to get it so that we don’t confuse people to say this is the dose, this is the dose regimen for children within that age group of 6 months to 5 years,” Fauci said.

The FDA has downplayed suggestions that it is delaying the review of COVID-19 vaccines for the youngest children. Asked at the Senate hearing about the topic, Marks hinted that Moderna’s application might simply take longer for regulators to comb through.

“Some of these are complicated because they are relatively larger, covering larger swaths of the pediatric population than others,” said Marks.

While Moderna is already cleared for use in several countries for children as young as 6 years old, only adults are authorized to receive the 100-microgram shots in the U.S. The company’s submission for American teens has been stalled for months before the FDA over concerns of rare heart inflammation side effects linked to the shots.

During the past weeks, Moderna says it has also filed with the FDA data from its 6- to 11-year-old submission for other countries, as well as safety follow-up data in adolescents covering 6 months after they were vaccinated.

The company’s executives told investors earlier this year that it had agreed with the FDA to study a smaller 50-microgram primary series in adolescents, though insisting that the company remained confident in the “strong efficacy profile” of 100 micrograms outweighing the risks in that age group.

“We care deeply about the health and well being of children. So making a safe and effective COVID-19 vaccine available for kids under 5 years of age is absolutely one of our highest priorities. But simply making a vaccine available doesn’t matter if parents are hesitant to get their kids vaccinated,” Marks said in a video posted by the FDA on Tuesday.

Only around 28% of children ages 5 to 11 years old are fully vaccinated and vaccine hesitancy among parents of this age group has climbed in recent months. Close to four in 10 parents of children in the age group say they probably or definitely will not get their kids vaccinated, as of the CDC’s last immunization survey.

“But let me be very clear, being thorough absolutely does not mean we are delaying review of these vaccines. We are going to move with all expediency, without sacrificing our standards, to complete our evaluations,” Marks added later.