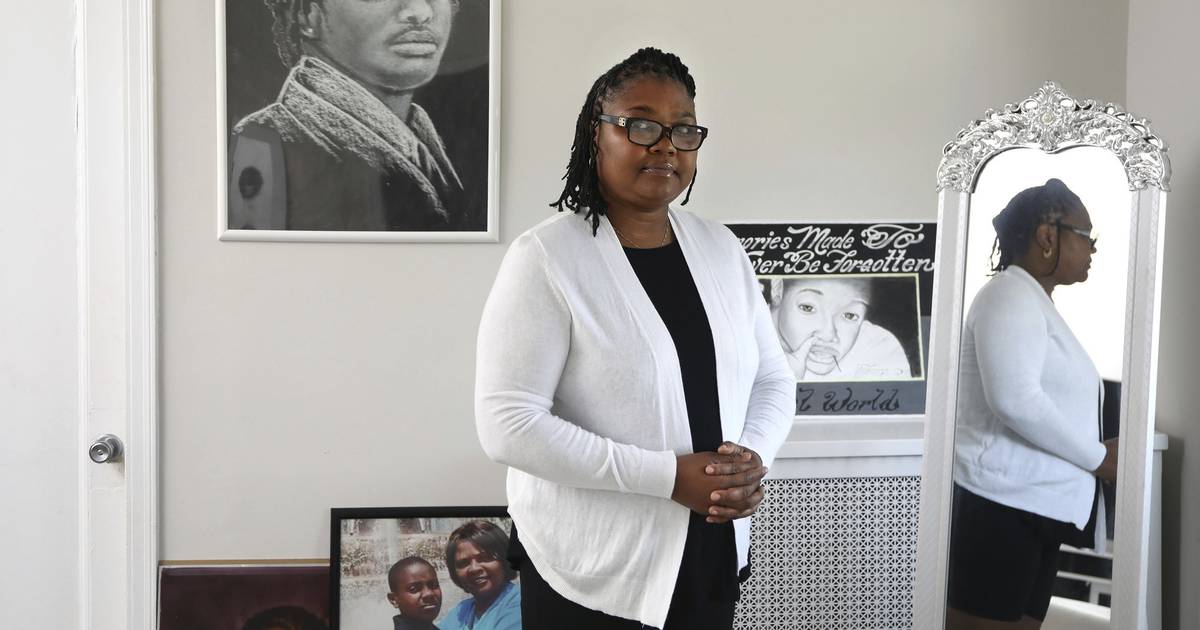 For years after her son was fatally wounded by Chicago police officers on the South Side during a traffic stop in the Washington Park neighborhood, Octavia Mitchell stopped celebrating Mother’s Day.

But in 2021 she decided to refocus her fight to clear her son’s name after a decade of confronting city officials to prove her son was not firing a gun at police. She changed her focus to bringing life to the Heal Your Heart Foundation, a nonprofit she started in honor of her son Izael Jackson, then 18, who was a senior preparing to graduate from Hyde Park High School.

Despite the COVID-19 pandemic making it harder for gatherings nationwide, she pulled off the first annual Mother’s Day brunch in 2021 for other moms who lost children to Chicago gun violence. Some of the mothers had brunch with women who were the rivals of their children, sometimes connected by gang activity to their child’s slaying.

The meeting of the moms was successful, and they embraced and shed tears, realizing the assignment was now preventing other mothers from experiencing the same dreadful pain.

This Mother’s Day, Mitchell and Dedra Morris are revamping the celebration to focus on trying to help the mothers’ healing process.

“I hope to be able to bring more mothers, and to make it bigger and more special,” Mitchell said near the anniversary of when her son was pronounced dead from his wounds, April 25. “Last year I had a banner with all the deceased children’s names. It was too emotional and filled with pain so I don’t want to do that again. Some moms had two and three kids on that banner. I was like ‘Wow, this mother has it worse than me.’”

Mitchell explained that her goal is to put a smile on each woman’s face.

“I don’t want it to be that long for any mom because you deprive your other children from celebrating their mom,” she said. “Although we are grieving, we can’t be selfish.”

This Sunday, Mitchell and Morris hope to have brunch together with at least 100 others who lost children to gun violence or COVID-19. Other attendees might also have lost mothers to violence or the virus.

“Our plans are to have a surprise for each mother or child to brighten up their day,” Mitchell said.

Lately, Mitchell is fully involved with the Heal Your Heart Foundation and addressing the long-lasting grief mothers have to grapple with until their death.

Last year, an out-of-state attorney, Phillip Aaron, who agreed to take the Izael Jackson case for free, died of natural causes. Aaron had worked in Chicago representing young African American victims of sex abuse by priests in the Archdiocese of Chicago. He had said he felt a kinship with Mitchell’s case because it involved Black residents being “abused by the system.”

“Miss Mitchell is a special person,” Aaron said in a 2019 Tribune article. “She was working through pain and tears at a time, in a way when most people would have given up. But she knew in her heart her son didn’t do what they accused him of. I’ve never really met anyone with that type of firm determination to go on no matter what the obstacles were.”

Mitchell is still as determined in 2022, as she waits for the federal court to assign her a new attorney.

“I don’t fault people. I understand nobody wants to go behind someone’s mistake because it’s a problem someone else created,” Mitchell said. “I try to make negatives into a positive.”

Since the Chicago Office of Police Accountability declined to open the case again because labs ruled the DNA results inconclusive, Mitchell now wants to know the ingredients used in the testing to determine if another conclusion could have been reached.

“The Illinois State Police refuse to speak with me, Kim Foxx wouldn’t call me back, and Mayor Lightfoot led me around for months until one day cold-bloodedly her clerk said she’s not meeting with you,” Mitchell said. “Am I not owed an explanation after my baby was shot in the back three times, and the DNA recovered at the scene went missing for years?”

“This is your city Mayor Lightfoot . It’s your city and now it’s your problem,” she said. “Stop putting names in a bucket and having a lottery on who gets justice depending on where it happened.”

Recently one of last year’s Warrior Moms got a sliver of justice when the alleged shooters of her son, Carlton Weekly, also known as FBG Duck, were arrested and charged in his slaying in downtown Chicago after the FBI got involved in the matter.

Mitchell pointed to the multiple arrests of looters downtown following the civil unrest after George Floyd’s murder by a Minneapolis police officer.

“Only clothes being stolen from downtown is more important than our babies being murdered,” she said.

This Mother’s Day brunch is being held in the North Pullman District. Those wishing to attend or support the event can contact Octavia Mitchell at 312-581-1770.