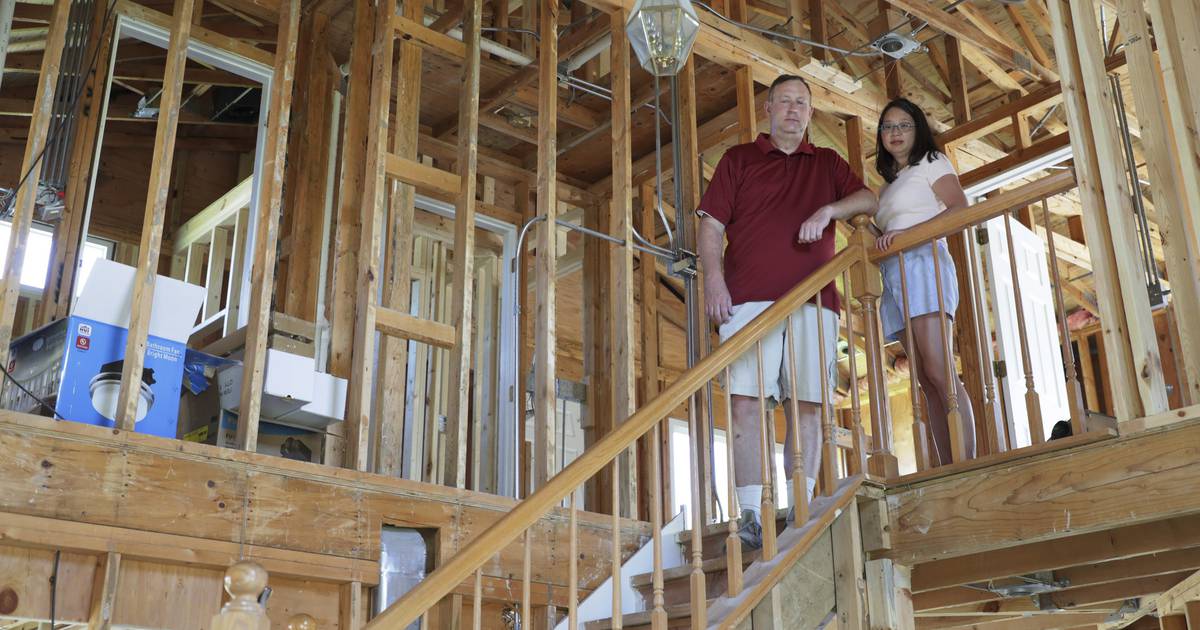 One year after a tornado tore a three block-wide strip of devastation through Chicago’s western suburbs, a hard-hit neighborhood in Woodridge remains a work in progress.

The trees that smashed through roofs and littered the streets are long gone, replaced by saplings swaddled in green irrigation bags. Plenty of sawed-off trunks remain, though, bearing witness to what happened in a few violent moments the night of June 20, 2021.

Likewise, while many houses are adorned with gleaming new siding and freshly shingled roofs, a few are still boarded up and one is simply gone, leaving nothing behind but a foundation, a security fence and a construction company’s advertising sign.

In short, the recovery appears to be following the same hit-or-miss pattern as the tornado itself, with some homeowners bouncing back and others still waiting to be made whole, bedeviled by insurance hassles, supply chain problems or contractor availability.

“The stress over the year has been unbelievable,” said Richard Remson, whose heavily damaged house has been rebuilt except for his elevated deck. “You’re getting money from the insurance company and you have to give it to a contractor you know nothing about. How would you feel about that?”

The National Weather Service concluded the tornado touched down in Naperville about 11:10 p.m. before carving a 16-mile path through Woodridge, Darien and unincorporated DuPage County, damaging hundreds of houses and destroying an untold number of trees. Classified at its peak as an EF-3, its sustained wind speed reached as high as 140 mph.

Eight people were hospitalized with storm-related injuries. One Woodridge resident, Katie Wilson, lost her unborn child when she was struck by a tree that crashed through the roof of her in-laws’ house.

It was one of the most powerful storms to hit the Chicago area in years ― much more damaging than last Monday’s extreme weather, whose 80 mph winds still toppled plenty of big trees and knocked out power to thousands of residents.

An extensive cleanup began almost immediately after last year’s tornado, with chain saw-wielding homeowners, neighbors and work crews slicing through thick tree branches that covered the streets and many front yards. Morgan Arcisz lost two mature trees, a pine and a pear, but luckily they didn’t damage her Woodridge house.

She recalled a terrifying few minutes when an emergency text message prompted her to round up her mother, her cats and a bird cage and dart downstairs just before the tornado arrived.

“All you heard was a big boom, and that’s probably when it was right here because it made a straight shot (down the street),” she said. “It was an extremely scary experience to go though.”

She received two replacement trees, an Ohio buckeye and a common hackberry, from the Morton Arboretum, which delivered more than 300 to affected areas.

“The trees were chosen by location so they’d be varieties that would be appropriate for each community and would provide some diversity,” arboretum spokeswoman Tari Marshall said.

Evergreen Lane in Woodridge was stripped of nearly all its trees, and many of its houses took significant damage. Lorelei Johansen, who hunkered in her bathtub as the tornado passed by, said she needed new siding and a new roof in the aftermath.

“Pretty much everybody on this block had some hole (punched into their house),” she said. “I had a hole in my garage. They had a hole in their kitchen. She had a hole in her bathroom. Every house had something.”

She was able to stay in her house while it was rebuilt, though conflicts with her insurance company dragged out the process. Others were not so lucky: She said some of her neighbors are still fighting with their insurers or even trying to sell their houses as-is.

Not far away, Chuck Hinrichs had a pile of lumber in his driveway awaiting the contractor who would turn it into a garage. He had no problems with his insurer, but said the settlement he received has already been outstripped by inflation.

“It’s going to be a pretty good amount of money (out of pocket), but we’re making improvements, also,” he said.

In Naperville, city officials said 231 structures were damaged by the tornado and 22 houses remain in disrepair. One belongs to Marc and Marie Whirledge, a two-story skeleton of studs and flooring protected from the weather by a new roof and a thin layer of home wrap.

Marie Whirledge said she visits daily to check on the progress, or lack thereof, because she and her husband are living with her parents five minutes away. She has watched with mixed feelings as neighbors, whose houses once were tagged as uninhabitable, have returned to their homes in recent weeks.

“I’m really happy for them. I just wish it was time for us to move in,” she said.

As in Woodridge, some Naperville homeowners have been stymied by insurance and supply chain issues, along with contractor availability.

“We’ve seen various stages of reconstruction happening, and sometimes things were happening and then they would come to a stop because they were waiting for windows,” city spokeswoman Linda LaCloche said.

A few months after the tornado hit, LaCloche said, several neighbors reached out to the city to establish a long-term recovery group with local nonprofits to deal with the lasting effects of the tornado.

“There’s obviously always logistics to be worked out,” she said. “We think we can work through the network of nonprofits that are already established to create something like that for the future.”

More assistance came from the office of the Lisle Township assessor, which provided property tax relief to residents whose houses were uninhabitable. Deputy Assessor Steve Arling said 27 homes in Naperville qualified, along with 20 in Woodridge and 56 condominium units in unincorporated Woodridge.

Darien Mayor Joe Marchese said his town, which lay toward the end of the storm’s rampage, suffered damage in two subdivisions, though the toll wasn’t as severe as in neighboring Woodridge.

While Darien made it through the tornado without a great deal of destruction or any significant injuries, Marchese said the episode still produced lasting changes.

“When people hear the tornado warning, they used to just watch (to see if anything was coming),” he said. “Now they go down to their basements right away. It raised the alertness level of a lot of people.”

Houses were not the only structures battered by the storm. Woodridge’s Skeleton Key Brewery, which had only recently expanded, lost a chunk of its roof in the tornado, then saw the interior ruined by days of rain.

Co-owner Emily Slayton and her partners had their own headaches and delays — “We weren’t able to do the internal build-out until December,” she said — but were aided by an online fundraising effort that netted $135,000.

Skeleton Key finally reopened last month, and Slayton said business has been good. To honor those who helped revive the brewery, she had an inspirational print made from a favorite book, “The Boy, the Mole, the Fox and the Horse,” and decorated it with the handwritten names of all 2,000 fundraiser contributors.