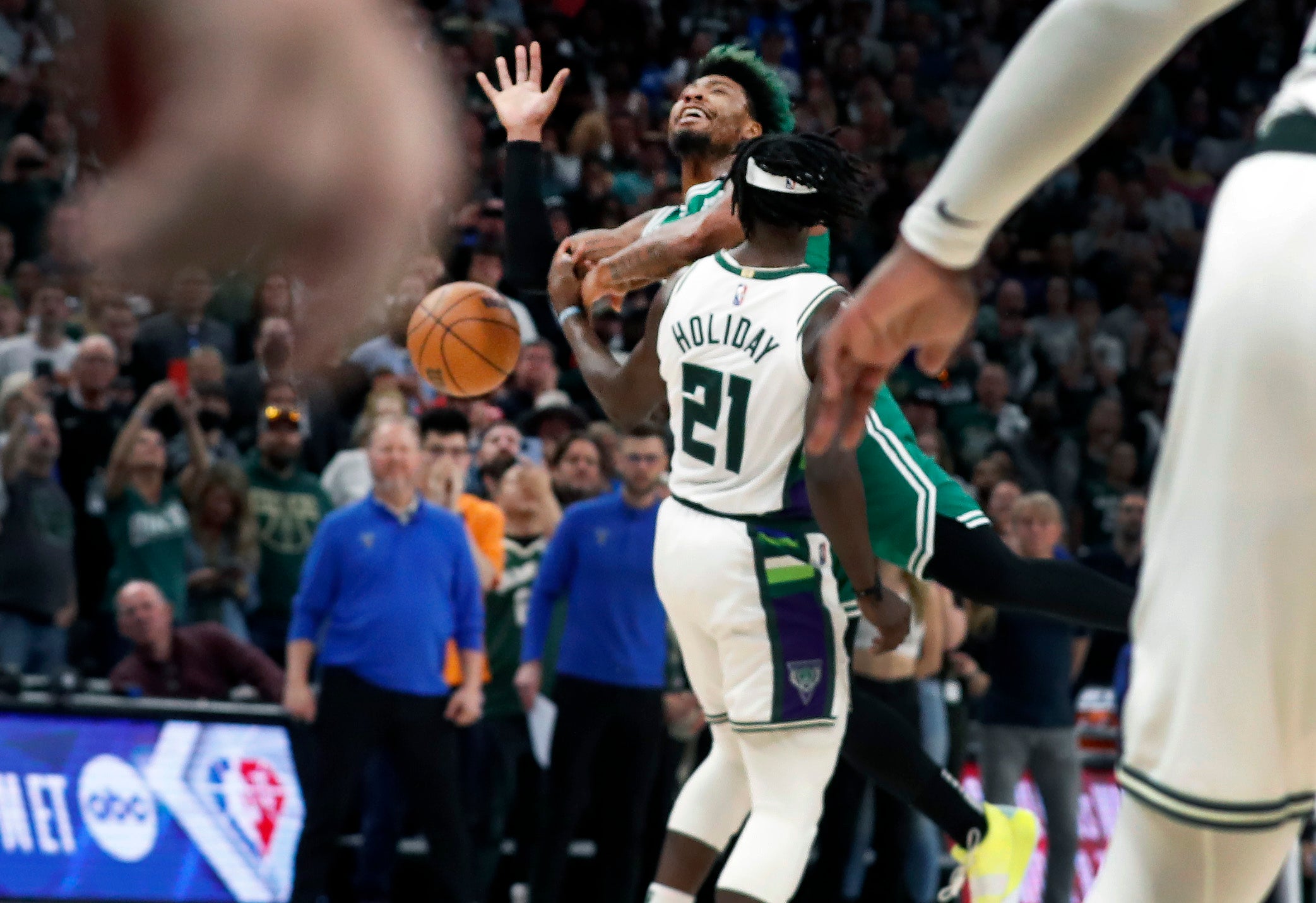 The Celtics called out officials at the end of Game 3 against the Bucks on Saturday for awarding Marcus Smart just two free throws instead of three when he was fouled by Jrue Holiday, but the league backed the controversial call in its Last Two Minutes report Sunday.

With the Celtics down three and just 4.6 seconds remaining, Smart appeared to curl into a shot behind the 3-point arc as Holiday brought his hand down and committed a foul. To the Celtics’ horror, the referees awarded Smart just two free throws instead of three. The Celtics — who used their challenge earlier in the quarter unsuccessfully — nearly tied the game anyway when Smart missed the second free throw and kept the play alive, but Al Horford’s tip-in happened after the buzzer rang.

Here’s a look at the play.

After the game, the Celtics said they were told Smart swept his way into the shot — similar to a now-infamous foul-drawing technique perfected by Kevin Durant. Ime Udoka called it a “poor call.”

“What did you guys see?” Smart asked reporters rhetorically. “I would like somebody to answer that. I mean, that’s all I’ve got to say. We need 3 with 4.6 seconds, they know we need 3, we know they are going to foul, and it’s not like he got me when it was down low, I was already in my shooting motion.”

The L2M report, however, disagreed.

“Holiday (MIL) commits a foul by making contact with Smart’s (BOS) arms before he is bringing the ball upward toward the basket,” the league wrote in its comments. “A personal foul is correctly called.”

A very generous interpretation of that ruling is that perhaps the league contends Smart was fouled by Holiday’s left arm when he reached in initially, which — again, very generously — might have happened a split second before his shooting motion started.

A much less generous reading could note that Smart is gathering by that point.

“I was just going for the three,” Smart said. “We needed three. If they foul me, I was shooting it regardless. Really wasn’t even anticipating the foul, but he did it. Like I said, I was already in my shooting motion. I thought it should have been three.”

The league also cited five missed calls, most of which weren’t particularly likely to be called anyway. Al Horford could have been whistled for defensive three seconds in the final minute, but all he did was hang near the rim as Holiday dribbled the clock down, and Horford quickly rectified his mistake. Jayson Tatum could have been called for a weak foul as he fell to the ground on a Holiday drive slightly earlier, but given the way the rest of the game was called, it would have been an out-of-character whistle.

The league did admit fault on a foul by Jaylen Brown that went uncalled, even though Giannis Antetokounmpo appeared to absorb significant contact on a drive with 1:26 remaining.

Ime Udoka sounded like he was ready to turn the page when he spoke to reporters on Sunday, noting (accurately) that the Celtics can’t let officials decide the result of a game.

“It was a missed call,” Udoka said. “The execution on the missed free throw was good. It looked like he got grabbed a little bit there. Overall, it’s one play. We have to be better in the third quarter. When I mentioned that yesterday, literally they missed a call that would’ve got three free throws and a chance to tie it obviously, so that stands out. Throughout the game, we could be better in the third quarter — especially with the turnovers and things of that nature.

“Overall, the refs have a tough job as far as that. Literally, the one play that stood out was the big one at the end. But things we have to play through and be better and not leave it in the hands of the ref, which we can’t do.”