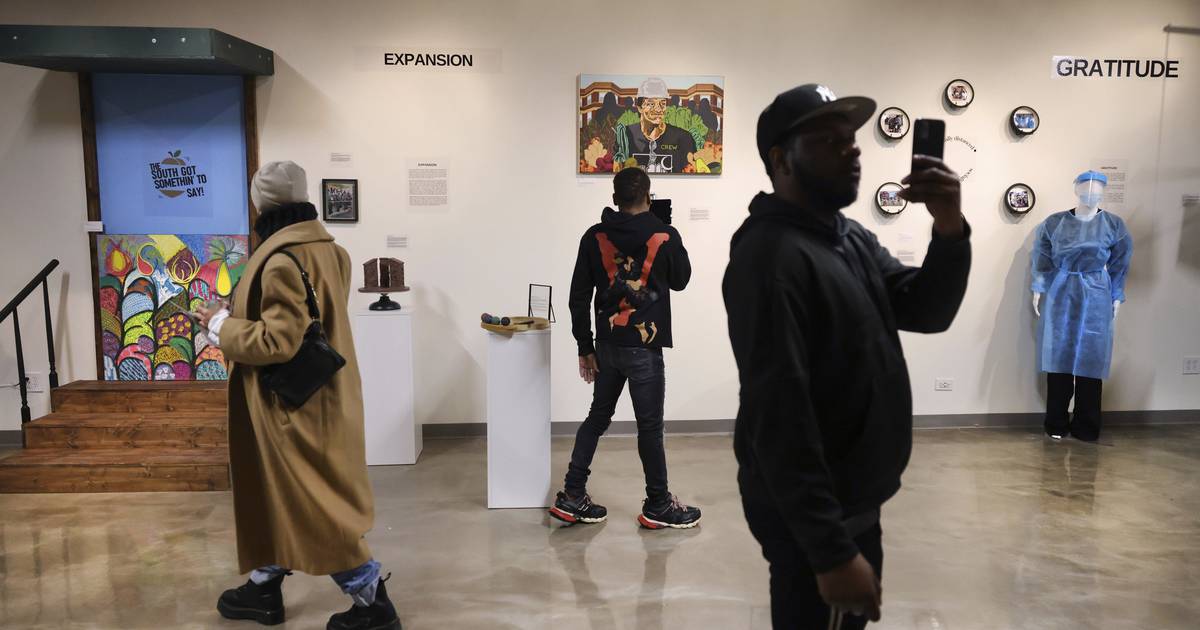 Andre Thomas, aka Taqi Thomas, a former gang leader from the Englewood neighborhood, gets emotional when speaking about the Inner-City Muslim Action Network, or IMAN, an organization that runs social uplift programs on the South Side’s 63rd Street corridor.

The 50-year-old credits the nonprofit with changing his life and its trajectory after he left federal prison after 12 years for drug-related charges. A fellow inmate told him about the organization after they were both released.

“I think about that all the time and it brings tears to my eyes,” he said. “Because I’m not sure if it would have been something good. I’d probably be a victim of recidivism or probably be dead. IMAN has a motto: change, serve, and inspire. And they did that — they changed my mindset and inspired me to do better and they served me in the process. I didn’t have that mindset when I first came home. I was like: I have to find a way to survive and I was willing to do it by any means necessary. I thank God for using IMAN as a tool to change my life and my life trajectory.”

Thomas is but one person who praised IMAN’s existence at its 25th anniversary event Thursday, which included the opening of its new art space, IMANifest Arts Studio, with the exhibit “The People Made This: A Look at IMAN’s 25 Years.” The art exhibit featured a variety of mediums showcasing the work that IMAN has provided through the years with a focus on wellness, from housing, employment, mental and behavioral health an/ primary health care, to healthy foods with the Go Green Community Fresh Market (1208 W. 63rd St.). IMAN provides social services to Chicago’s marginalized communities, including job training and housing for former inmates and high-risk youth. The word “iman” means faith in Arabic.

“The prongs of IMAN’s work is this very deliberately crafted, interconnected, cohesive way in which we think about our work, which is very intentional,” said IMAN founder and Executive Director Rami Nashashibi. “Health, wellness and healing is the core of our mission statement and that is conceived of through organizing, through creative artistic expression, through the reentry housing program and of course through running a federally qualified health center. All of the work that we do has always been part of how we brought people together, how we’ve connected disconnected communities, how we’ve radically re-imagined what is possible in our communities.

“There was a time when people would say, ‘Oh, you do your programming. Oh, you do a housing center. Oh, you do organizing. Man, you do a lot.’ But I think the more people are familiar with our work, they understand and say of course you do these things together. It makes perfect sense. Building that model also has become very resonant. It’s why we’re in Atlanta and why I travel across the country in supporting strategic planning sessions and technical assistance for these types of models, from Nashville to Seattle, that are increasingly aware of the fact that this integrated approach is not only a very organically aligned approach, especially with communities of color in urban centers, but one that is the most effective.”

IMAN seems to always be in the news, whether it’s attending a Cubs crosstown series game against the White Sox — to emphasize the importance of showing up even when you disagree in order to bridge divides — or rallying around activists like Cariol Horne, a Black woman who was fired from her job as a Buffalo, New York, police officer after she intervened in an arrest where she said a fellow officer used a chokehold on a handcuffed suspect. IMAN got involved in her case, using its networks in Chicago to secure the help of the Kirkland & Ellis law firm, which partnered with a Harvard Law School team to reverse Horne’s firing.

Another IMAN initiative helped corner stores convert from selling lottery tickets and liquor to providing healthy fare on the South and Southwest sides. IMAN commissioned a permanent installation commemorating Dr. Martin Luther King’s 1966 march in Marquette Park, at the intersection of Marquette Park Road and Kedzie Avenue. Last month, IMAN was one of 40 nonprofits led by people of color and whose missions focus on the preservation of cultural arts recognized with a grant award from Chicago’s Cultural Treasures, the local arm of America’s Cultural Treasures.

Grammy-nominated singer and songwriter Maimouna Youssef doesn’t see the movement and culture that Nashashibi created as ever dying. She’s worked with IMAN for 15 years and says she always comes to Chicago when they call for her help. She said IMAN’s work is tangible legacy work.

“They get that the key to our collective freedom has to be holistic. They understand that you have to heal so many parts of the self in order to have a person show up as a participating citizen,” she said. “There’s so many aspects to healing a person, to allow them to show up as their best self in society. And they get that and they’re servicing every part of that human being. A lot of organizations, they’ll do one thing. But (IMAN) having such a holistic approach to our collective well-being, that’s everything. At IMAN, there’s never any difference made about where you come from. You’re a human being. You need some healing? Come here, we got you.”

Devon Lowery is coming up on the one-year anniversary of his release from prison on Dec. 23. He’s been a part of IMAN’s Green ReEntry program for the past three months. The program gives participants a stipend for trade training in the electrical, HVAC and carpentry fields and emphasizes life-skills training so people can sustain change and reduce recidivism. Lowery, 27, is taking the electrical training and calls the program life-changing.

Gralyn Reaves, 27, plans to take his HVAC training to Dallas when he graduates from the program. His plan is to buy property and do renovations by himself. He came to IMAN because of his Muslim faith.

Thomas uses every aspect of IMAN’s growing networks. He shops at the Go Green Market, his physician is one that works for IMAN, and he even bought his first home from the nonprofit, blocks from its main campus. Thomas left his job as a Coca-Cola merchandiser for 14 years to serve as IMAN’s senior manager of community engagement and safety intervention. He always wanted to work with IMAN because of what the group did for him.

“I wanted to be a part of the process of doing it for others and be an example and let them see that I came through this transition,” Thomas said. “If they can help me, they can help anybody.”

IMAN now owns about 15 lots of land along 63rd Street, including properties on both sides of the street at 63rd and California Avenue, the most recent a former beauty salon that will serve as an event space for the community. The main building houses nine therapy rooms, an art lounge and a pavilion that can serve as a performance space during warmer months.

Next up for IMAN: Dozens more units of housing and building out thousands of square feet in a shuttered school near the Go Green Market to expand IMAN’s health care options. Groundbreaking on the school redevelopment begins next year with a goal of being completed in 2028, Nashashibi said.

“We really just scratched the surface of where we need to go over the next 25 years,” he said.

IMAN’s anniversary art exhibit runs through May 1. Hours are 4-7 p.m. Wednesday, 1-5 p.m. Thursday, and 10 a.m.-4 p.m. on weekends. Folks who have IMAN stories are invited to share them at the gallery during the exhibit.