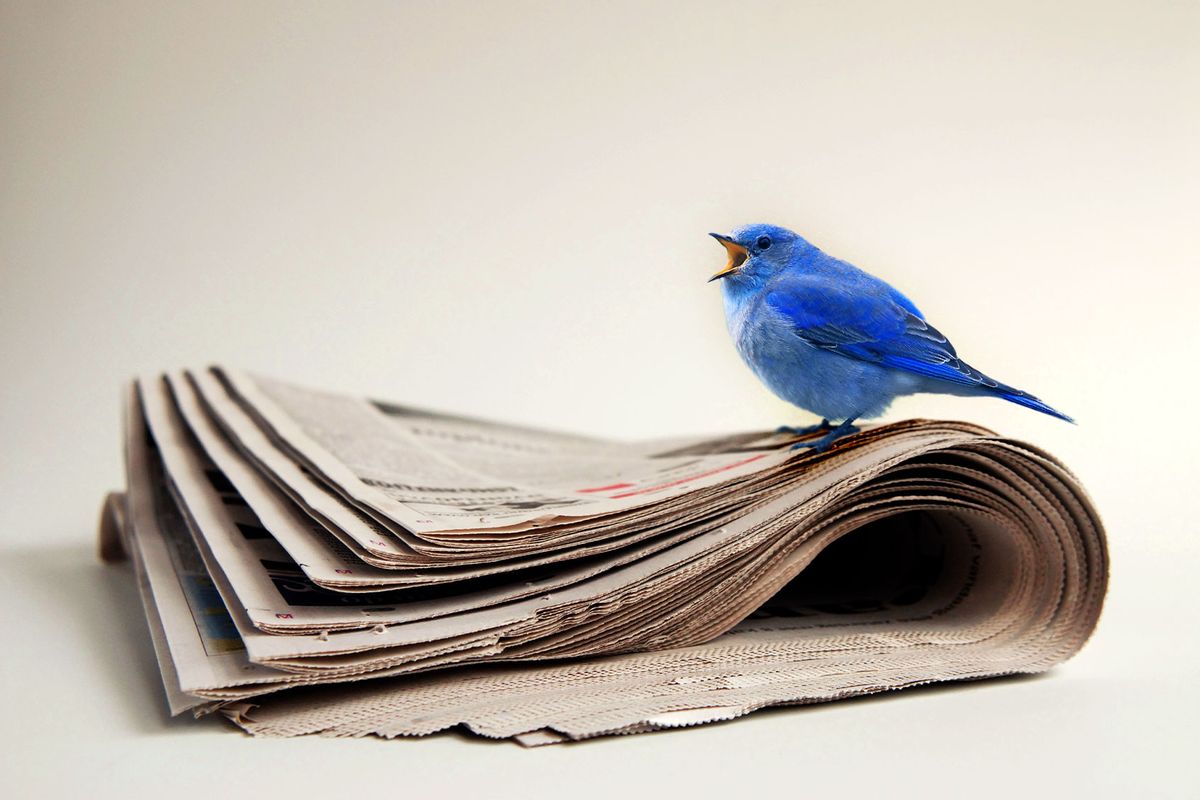 Shortly after Elon Musk threatened to buy Twitter, Twitter’s board agreed to the $44 billion takeover offer (which looks, more and more, less than certain). And shortly after that, Twitter users began making threats of their own. To leave.

Outraged that yet another billionaire could seize control of yet another supposed venue for free speech – or that the space bro would make the social media site, often criticized for its already lukewarm handling of harassment, even more of a vipers’ nest perhaps reinstating Donald Trump’s Twitter account – some users acted on those threats. At the time of this writing, I’ve lost about 200 followers, and I’m far from alone in that, though it remains to be seen what exactly is happening, whether it’s a purge or glitch or people are actually jumping social media ship, as some swore they would.

It doesn’t matter to me. As many women and users from marginalized communities have pointed out, the more Twitter followers you have, the less the site becomes enjoyable, even tenable. Like most of those women, I receive a lot of unsolicited direct messages from men via Twitter, some of them horrifying: sexual or violent or both. Long ago, I put protective settings, the few that Twitter offers, in place. I don’t get notifications from anyone I don’t follow, and often set replies to my tweets to be only from those I follow as well.

It doesn’t matter to me — but it might to my future livelihood. As a writer in the 21st century, I’m expected to have a social media presence. I’m expected to promote my work online, but not too much. To be charming, but not too charming (see: DMs from strange men). I’m certainly not the only one. From freelance writers to book authors, from artists to disabled folk, not everyone has the luxury to leave Twitter, even if they want to.

RELATED: Twitter should have died long ago — let Elon Musk take it out back and shoot it

Years ago, the rumor started going around literature circles that books, particularly memoirs, were being rejected by editors because the writers did not have a large enough presence on social media. At least 10,000 followers were needed, went some of the rumors. 25,000 followers, went others. In 2019, Publishers Weekly wrote, “The moment agents or editors hear an author has a small following or no following, it’s over,” calling a “huge” social media following “a must for a book deal.” The idea was that memoirs especially, with their focus on a singular life, would not sell well unless readers were already familiar with that life, were already fans.

That idea doesn’t exactly play out in book sales. As The New York Times wrote in a piece about social media and sales of books, particularly those penned by celebrities: “Even having one of the biggest social-media followings in the world is not a guarantee.” Yet still the pressure has persisted for authors. To have a platform and to use it in a certain way. What way, of course, keeps changing.

I’m not sure someone reads a witty, dashed-off brief on Twitter and thinks yes, I definitely want to read a novel by this person.

As a writer of published books, I’m constantly bombarded with advice on social media best practices. Post on Twitter at least twice a day. Post three times as much about others’ work than about your own. Have a pinned tweet with links to buy your book. The only thing that’s certain is that no one knows what they’re doing — but you have to do it. Authors are expected to “establish online presences and cultivate followings — in other words, to do their own publicity,” wrote Publishers Weekly in 2022. “This meant not only promoting their books on social media but also crafting a public identity to attract potential readers.”

I’ve had articles go viral and I’ve had tweets go viral – but I’ve certainly never had a book go viral. I’m not sure someone reads a witty, dashed-off brief on Twitter and thinks yes, I definitely want to read a novel by this person. And yet, the expectation holds. Failure to have social media in the present day is considered a sort of warning sign, like Joe on Netflix’s “You” — what are you hiding, you psychopath?

It’s not a pressure older generations may always understand, but the days of being an elusive artist who publishes a book once a decade then disappears like a literary Brigadoon are over for all but the most privileged. If you’re already well-known, maybe you can do that. For everyone else? You’re going to be expected to have an online presence.

Publishing is not the only field with social media expectations. Journalists have a reputation for always being online, particularly on Twitter, but often it’s a given. At my last full-time newsroom job, where I was an editor, I was required to have a public Twitter feed.

News still tends to break on Twitter. Alongside that, jobs and opportunities are posted there. As Scarlett Harris, a cultural critic, author and editor, wrote to me (yes, on Twitter): “I won’t be leaving unless [Twitter] fundamentally changes. I’ve made so many professional contacts and friends on here. I wouldn’t be able to work or promote my work in the same way.”

I wouldn’t have been able to pay my rent without Twitter in those days.

That sentiment was echoed by Mike Hipple, a photographer and writer who said he does use Instagram to promote his work, but when it comes to Twitter: “I think I’m going to have to stay — just in terms of contacts and opportunities plus the mere fact that it’s a way to promote my work. There’s so much out there and, while Instagram is more useful for me as a visual person, every little bit helps.”

Twitter, much more so than other social media, functions as a hub for journalists looking for sources (some admitted to me they’ve stopped calling for sources on Twitter because they get overwhelmed with responses) as well as editors posting work. Many editors from a variety of publications use Twitter to post calls for pitches: stories they’re hoping to hire out to freelancers. Journalist Lola Méndez tweeted: “Unless editors leave Twitter I literally can’t . . . Unfortunately, there isn’t another platform as sufficient for freelance writers as Twitter.”

News happens fast and so does the assigning of who gets paid to write about it. For the years I worked as a freelance reporter, a competitive and difficult job, I answered multiple calls for pitches on Twitter. I found work there, earned bylines and established long-term relationships with editors and publications. I wouldn’t have been able to pay my rent without Twitter in those days.

For some, Twitter has also functioned as a community, one they are loath to abandon. This is perhaps especially true among people who are disabled, including myself. As the pandemic continues to isolate particularly the most vulnerable, Twitter remains a place to share resources and find support. I’m on several Twitter message threads of deaf and disabled writers, few I know in “real life,” yet all who have offered encouragement to each other over the years, along with sharing vital advice and information, including job leads and health resources.

“If we leave a space, we leave behind friends who stay.”

I got my child a vaccine appointment because of Twitter. An internet friend tweeted the day the vaccine was approved for kids under 12 that she had found an appointment at a local children’s hospital and when I asked her, a stranger to me, known only through the internet, how, she sent me a link to the sign-up sheet.

As writer and critic Lorraine Berry wrote to me: “I thought about leaving, but I’ve given up Facebook and don’t use Instagram. Twitter is my best connection to other writers. It’s the only place to socially interact with folks who are working on similar things and feel community. Writing is solitary work. Company is good.

“But, more importantly to me,” Berry continued, “if we leave a space, we leave behind friends who stay, and we cede more of that space to the right-wing echo chamber. Tweeting is not resistance, but it’s also not being silent. I’d rather stay and make a noise.”

Concerns over Musk’s threatened takeover include not only one more public forum owned by a billionaire, but that this particular billionaire could contribute to the spread of misinformation and the proliferation of trolling, a toxic online behavior Musk himself engages in frequently.

But as Jennifer Pullen, a professor and fiction writer, told me: “Social media, including Twitter, was already owned by rich tech bros, anyway. There has always been plenty of toxicity, so unless it gets markedly worse, its usefulness matters more to me.”

Keith Roysdon, a journalist and true crime writer, told me when the news broke about Musk: “I signed up for one of the alternative sites people recommended and thought, OK, I can do this. I didn’t know what to do with Twitter when I got here in 2009 or whenever it was. But then I saw people today posting about how the fight was on Twitter.