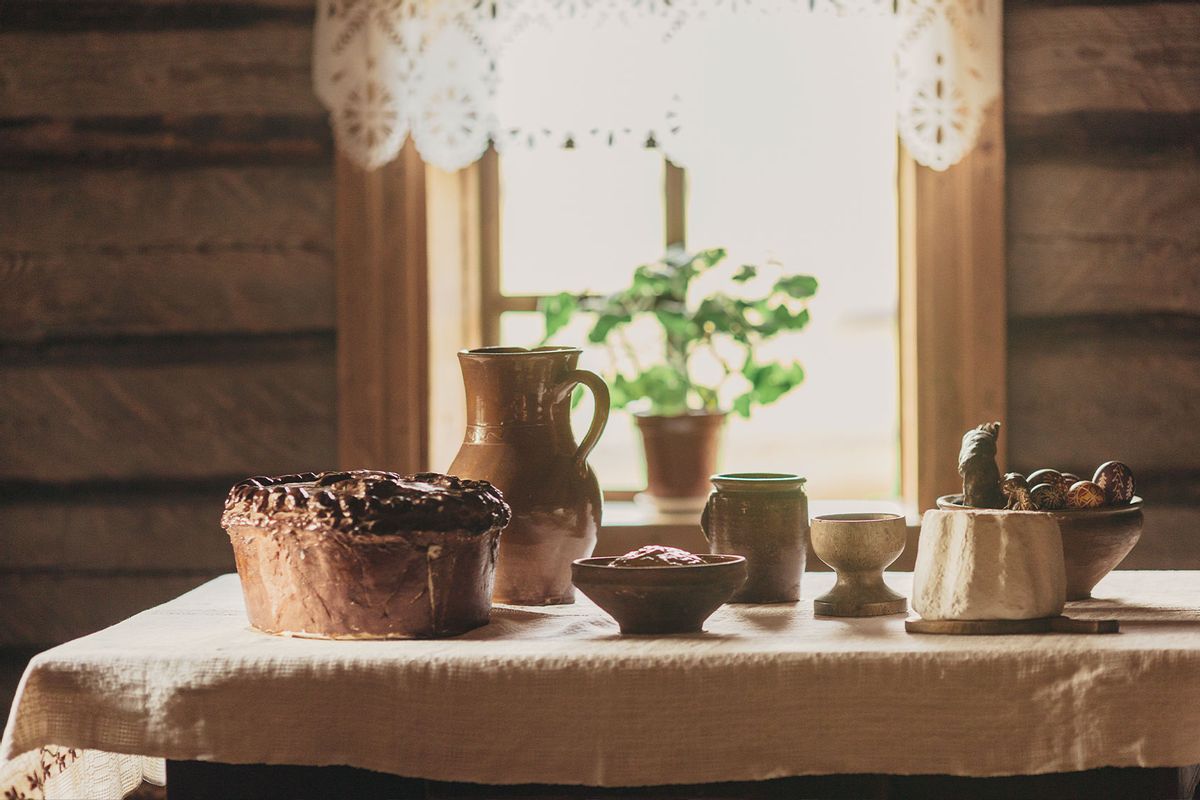 Oh, the oven is full. My cookstove is hot. Pots and pans crowd the kitchen counters. I may even break out my grandmother’s porcelain plates.

Outside, the ground crackles with frost — but I’m still cultivating, tending my attitude of gratitude like my life depends on the fruits of my labors. And it does. Farming is not gentle work; the body and spirit require as much regard as the land.

On this farm, there’s no Thanksgiving. Here, it’s harvest season. Firewood season. Wrap-your-salad-garden-in-blankets season. This is the week when the browns and grays come, and stay. It’s almost time for Mother Winter to blow down the door and wipe the fields clean.

Over the years, this slice of soil has nourished wild alliums, huckleberry, sassafras — even ancient apple trees planted by those who came to claim these West Virginia acres as their own. But this land did not see itself as acreage, or as part of any country — and knew humans only as itinerant intimates. When I arrived, the meadow burned purple with ironweed. Soon, fields turned to pasture, feeding poultry and sheep alongside the hairy, feral pigs who churned earth into muck into grass without cease. Until they, too, moved on.

Our first hard frost dropped weeks ago, but the radish, nettle, and corn salad are still holding on, tucked against the frigid ground like ears on a mad cat. I may yet find one last flush of shiitakes stair-stepping up the side of an old stump, feeding themselves on the rich red oak.

On Thursday, I’ll dig horseradish. I’ll drag my grandfather’s spade along behind me as I pick through overgrown ferns of asparagus, dodging burdock as I search for the perfect clump of spicy white roots to cleave out of the chilly clay. Just one fat tuber will do, or two.

Out of the freezer, I’ll pull a roast — the last of a Red Devon steer raised on the wild grass of a friend’s farm, nearby in the Allegheny Mountains. As I grip the hunk of frozen meat, frost shears off, crystals prickling my skin as they melt against my hand. I plan to roast the beef low and slow after a long, two-day thaw.

Only after the beef is in the oven, bracketed by the last of those steadfast Summer onions and maybe some sturdy sprigs of rosemary, pinched from the bush up the hill, will I turn to the potatoes.

Onward to the root cellar, basket in hand, to forage for ingredients. I’ll let my eyes trail along the shelves as I catalog the colorful canned goods: red and yellow salsas studded with chunks of sweet onion, whole fuchsia plums shedding their skins as they float in the jars, pickled green beans so thick and straight I feel my tastebuds jump at the piquant thought of dill and garlic. I never tire of admiring the bounty gathered in this small, dark room dug into the hillside. I’ll load a basket with waxy yellow potatoes still matte with soil, dark cherry preserves, that last jar of golden pickled beets.

Once back inside, the canning jars will frost with fog in my warm kitchen as I mound potatoes in the sink before scrubbing their skins to a shine. Each potato opens with a juicy whack of the old arc-blade knife my father gave me, the carbon steel pitted with as many dents as its wooden handle. Soon, rounds of potato nestle against the beef like stones encircling a grave. I will chop the cabbage next, though I always cook it last — a wild nest of shreds dropped onto the hot flat of my cast-iron skillet — the cherry-lacquered beef nearby, at rest.

One hour before dark, as the wind hurls itself against the mossy north side of my house, breaknecking up the long, crooked trail from the river, I’ll be hauling more firewood inside, simmering a pot of chaga and spices into mushroom chai on the small wood stove. The roast will glow, burnished and blazing, as I open the oven door to baste it with preserves and turn the glowing globes of potato in their spitting fat.

Over the Greenbrier River, past Cold Knob and the blinking windmills, I know my mother is doing much the same. So, too, are conscious farmers and cooks from Maine to Arizona. People who celebrate food do this simple work every day: we harvest, we cook, we eat. Daily nourishment can be uncomplicated; reverent eating doesn’t need to mean overabundance.

On this Thursday, I won’t be harvesting and cooking and sitting down for dinner to glorify the barbarity of my pinched-faced European ancestors, but because I believe that the effort to tend soil, cook slow food and savor each plate is worthwhile, that sharing real food with other humans is an act of radical gratitude.

Or because — in the absence of a more perfect solution — the best way to honor land that has never been mine is to steward it with the greatest care I can muster. So that, in the wake of cold and weary fingers, long hours peeling garlic and simmering broth, early mornings and late nights nurturing seedlings and tending trees and carrying water, the land — the Grandmother of us all — may thrive.