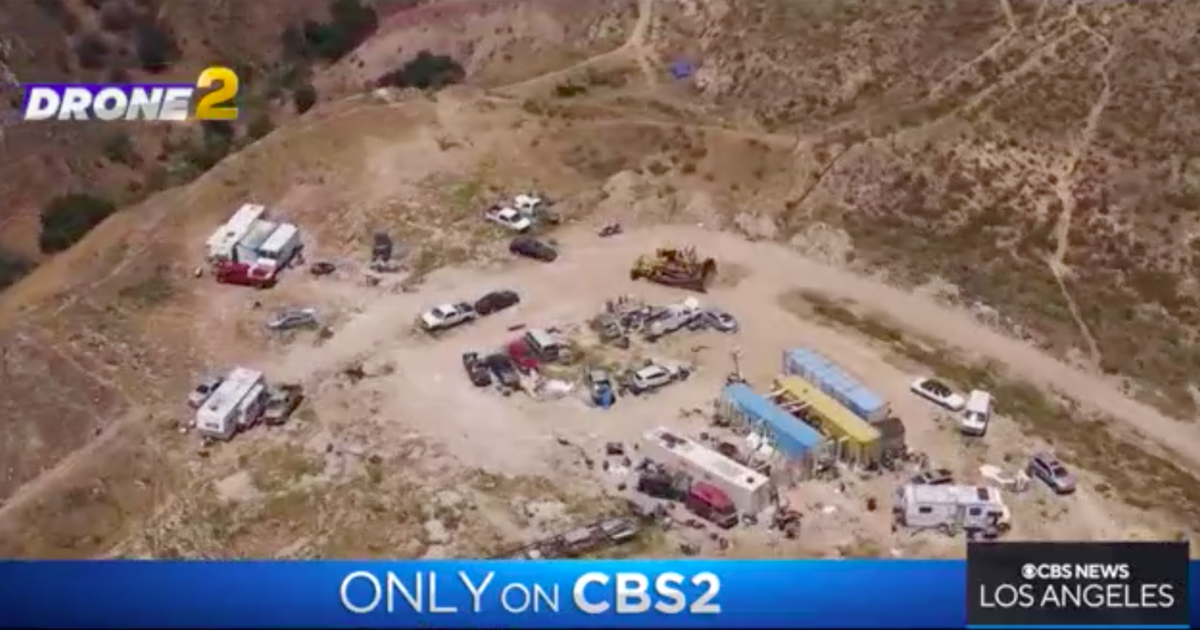 A bus perched precariously over a hillside, broken down vehicles and construction equipment, shipping containers and piles of trash are amongst the growing issues plaguing one Granada Hills community, as a vacant lot in the area continues to attract more rubbish.

Residents aren’t exactly sure who’s living in the lot, and why city officials haven’t stepped in to stop the issue before it gets out of hand.

“There’s trash, there’s feces,” said Angiee Suarez, one of the many residents fed up with the vacant lot.

She’s not alone in her concern that as the trash pile continues to grow, so does the number of unhoused people staking claim to the property and the potential for criminal activity.

Alleta Ojeda also lives in the area, detailing how there’s activity “all hours of the night,” including “cars coming in and out of there.”

“I see people barbecuing at night,” said Paul Singh, who can see the junk pile from his backyard. “A lot of people walking around as if something is going on up there.”

“We want someone who is accountable for this area,” he continued. “We can’t touch it because it’s private property.”

Suarez continued to detail how she has caught the same woman stealing things off of her porch on multiple occasions, also noting how “my car was broken into by the same vagrant.”

On top of all of those concerns, they’re also worried about the increased fire danger the property presents, since it sits on an extremely dry area surrounded by vegetation.

“We don’t want another incident, because there are 4,000 plus homes south of us… We get Santa Ana winds” said Leslie Deeds, yet another resident who wants an immediate change.

However, one resident provided an email sent to Lee back in June of 2021, detailing the “very dangerous situation” their neighborhood was being presented with.

Nearly one year later, and the email was still unanswered.

The owner of the property told CBS Investigative Reporter Kristine Lazar that they have hired two around-the-clock security guards, which were nowhere to be seen when Drone2 flew over the lot.

They also claimed that they’ve removed dozens of homeless people from the property in recent months, but since the property is so large, it’s impossible to fence in completely.

When CBS reached out to the office of Los Angeles City Councilman John Lee, they were issued a statement which read:

“This is the first we are hearing of this issue. Councilmember Lee takes community safety extremely seriously. Our office has already notified the Department of Building and Safety to conduct an inspection of this private property, and we will work with the Department to obtain compliance if violations are identified. We encourage the neighbors to contact our office for updates.”

It took just one day for the city to respond after Lazar’s story aired on CBS Los Angeles, issuing a slew of citations, a fine and looming criminal charges to the property manager if things don’t change soon.

“Why did it take a news story for them to do something? I mean the community here has been dealing with this for at least a year,” said Rudy Martin, the President of the Home Owner’s Association of the neighboring housing development. “We would go to the meetings, and people would show up and ask what’s going on, and all I could say is, ‘Call the city, call the PD;’ which everybody did, but we would get a deaf ear on it.”

The Los Angeles Department of Building and Safety has issued an “order to comply” to the property owner as well, meaning he must clear the land of the junk – vehicles and all – and return it to a vacant lot.

They have 30 days to comply before the city follows up with criminal charges.

“I think there is just a lot of bureaucracy due to the pandemic, and a lot of red tape,” Suarez said, speaking with Lazar again on Friday. “Unfortunately, people who do this to their properties just aren’t being held accountable.”

Lazar spoke with the property owner, who assured her that he was already working to comply.

He detailed how he has been fined $350 and was cited with code violations for unapproved open storage, unapproved use of land and an accumulation of rubbish garbage, trash and debris.

While they’re upset it took this long, residents are just happy something is finally happening, especially with fire season around the corner.

“You would think you would be concerned that there’s a bus hanging off a cliff and nothing has happened. It’s just sitting there,” said Sev Kocharian. “What would happen if they got a fire? They’re gonna run, and we are stuck up here. So we have everything to lose, they don’t have anything to lose.”

The property owner faces additional fines and possible criminal charges if he’s unable to clean up the lot in the 30 days he was given.