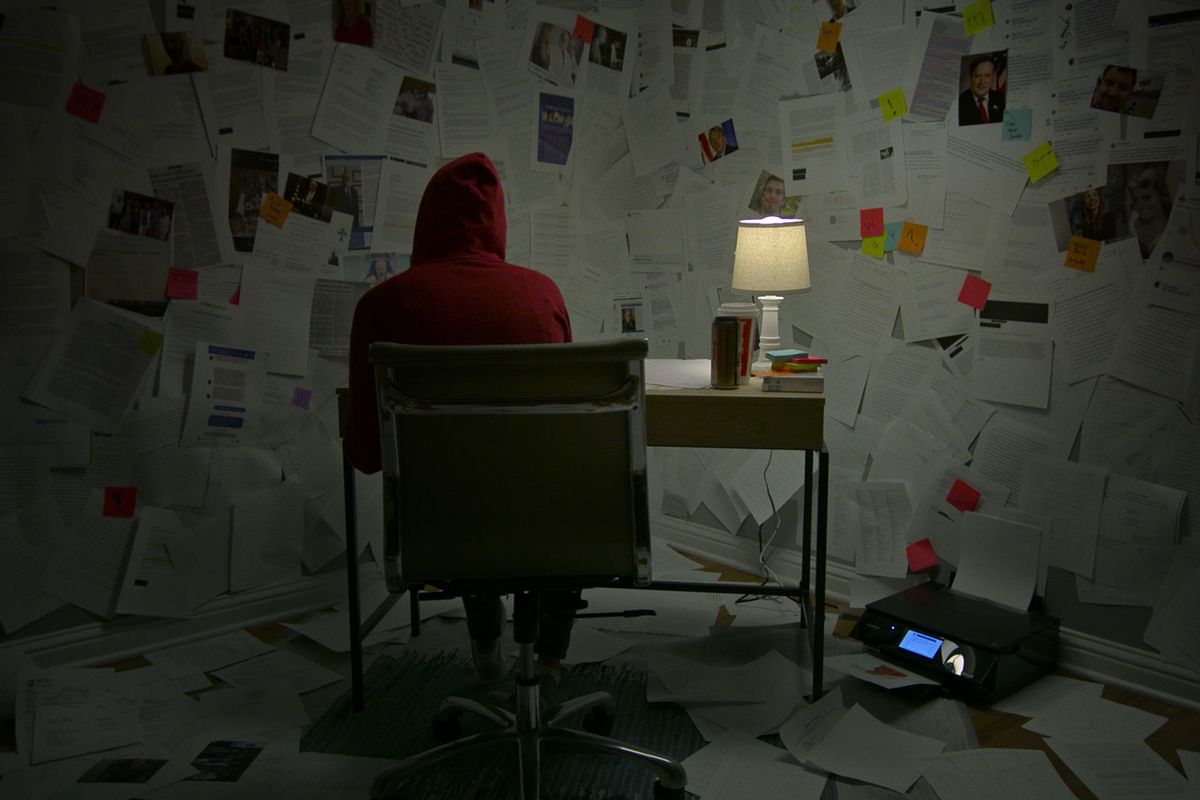 Quickly, when watching “Our Father” on Netflix, you realize this is not your average documentary. It’s not only that the story the movie tells is chilling — a popular and respected fertility doctor in Indiana, Dr. Donald Cline, is revealed to have replaced donor sperm with his own and impregnated scores of women over the years without their permission — but the way the story reveals itself is terrifying, layer after layer like a rotting onion.

Along with the horror, the documentary flashes with moment after moment of dark beauty. Angel wings fan out behind an actor playing Cline (Keith Boyle) as the extremely religious doctor baptizes white-clad believers in his backyard pool. Color plays a huge role in the stark film, full of shadows and crosses, as do reenactments. Far from “Unsolved Mystery” reenactments, the reenactments in “Our Father” blend actors with real people to startling effect. The emotion on their faces feels real because it is.

First alerted to Cline’s actions thanks to home DNA testing, the number of children Cline fathered keeps rising. Known in the film as “the siblings,” they band together, led by an extraordinarily brave woman named Jacoba Ballard, to find each other and search for justice for their parents, for countless women and for themselves. Like the answers as to why Cline, who may have believed in the Quiverfull movement, did what he did: justice is hard to find. Though the siblings and mothers, through their activism, were able to get a law on the books in Indiana, Cline’s violating actions are still not a federal crime.

“He told them nothing; they got nothing.”

And he’s not the only one. In April, a jury awarded over $8 million in a civil lawsuit to families in Colorado who had been impacted by a fertility doctor impregnating dozens of people with his own sperm. Fertility doctors in Texas, Connecticut, Vermont, Idaho, Nevada, Utah and around the world have been found to have used their own sperm without patients’ permission or knowledge. At a time when body autotomy and rights are threatened daily, thousands of fertility patients have not been safe in their own doctors’ offices.

Salon talked to “Our Father” filmmaker Lucie Jourdan about the horror and beauty of the film, and how IVF fraud fits into the growing and urgent national conversation about reproductive rights.

This interview has been edited for length and clarity.

One of the things I loved about “Our Father” is how you blended the reenactments with the real people that events actually happened to, which seemed new to me. Can you talk about how and why you decided to use reenactments in the film?

First and foremost, it stemmed from: I became very close with these siblings and I learned a lot of their stories, ones that weren’t even featured in the doc. The overwhelming issue they had was that Cline never gave them anything. So, when they asked for information, they got — I call it the cloak of anonymity. He told them nothing, they got nothing. They were left in the dark and I felt I wanted to put a face on Cline to counter that. If I had put him in the shadows and not actually featured an actor, he would get away with it more. There wouldn’t be a face. So I cast the actor Keith Boyle, who was lovely.

We actually filmed the reenactments with zero audio. But when [sibling Jacoba] first met with Cline, she had all these things that she wanted to say to him. When you’re in the room with a person, sometimes you go silent and you don’t have the courage to speak, or you don’t know what to say. That had really bugged her, that she didn’t get to say all of the things that she wanted to. So we had this unique opportunity.

“It was a choice to help Jacoba and it was also a visual choice that allowed for Cline not to be let off the hook.”

I thought if I could reenact the moment and have her really explain to me exactly visually what it looked like, what the moment felt like, if I could put her in that space again with an actor who looked so much like Cline, could she have a moment of catharsis with it? Behind the scenes, I had informed the actor of all of the things Cline had said to her . . . And she has this moment where she finally gets to tell this man, even though it’s just an actor, she gets to tell him what was important.

It allowed me to get someone who’s not an actress to be in a moment — and to not re-traumatize them, but to allow them to have that moment and be strong. It was a choice to help Jacoba and it was also a visual choice that allowed for Cline not to be let off the hook.

That leads into another visual choice that’s also emotional that I wanted to talk about, which is: color seems important in the film. You have Jacoba in that red hoodie. You have Dr. Cline in white. Was it deliberate to think about color in that way?

So all of the leads: [reporter] Angela Ganote wears bright red; Jacoba in her moments of stepping into her power, she wears red. She wears red in the courtroom. She’s wearing that red hoodie. There’s also an ode to “The Handmaid’s Tale” in the color, which is important because I do see some distinct parallels: having control over one’s body and the rights to that body.

“Why would we have a horror company do this film? But is this not a horror?”

Then for all the reenactments, while I did use victims’ accounts of what Cline’s office looked like, I wanted those muted pink and blue tones in his office. It’s the excitement of having a boy or a girl — but it’s just a little bit muted and a little bit dark and a little bit sinister. So yes, color played a huge part. And thank you for picking up on that.

Something else that struck me about the documentary is that it’s as scary as a horror film at times: Dr. Cline’s footsteps and his cane when he comes up to this restaurant table where the siblings meet him. And Jacoba is such a final girl character. She is a survivor and her last speech in the film is resonant and powerful. What were the creative decisions that went into deciding to film this way with this kind of tension?

Well, when I partnered with Blumhouse, there was a directive, right? This is a horror company and a lot of people, even the siblings, thought: why would we have a horror company do this film?

But is this not a horror?

“The doctor was punished for lying to the Attorney General –  but for nothing that he did to a woman without consent.”

I really do dial it up because of the simple reason that I don’t think as an audience, you would grasp the true nature of the kind of nuance of sexual assault and violence against women unless we really sat in that space. This entire film was from the victim’s point of view. It was a horror story when they learned what happened. So I feel like it was important to add that very sinister element. You know, when [Cline’s former patient] Liz especially would talk about being raped 15 times and not know it – I sat with her for hours. And I asked her to describe everything about those meetings from the smell in the room to the sounds. She describes it like a horror film because now she realizes what was happening to her. For me to honor her story and her point of view, I really had to dive into it.

And this is really the women’s story. You also talk about how there is no federal crime for what Dr. Cline did, which is part of the urgency of the show. That the mothers had no choice. They did not consent, but Cline was not punished. How might this film add to the conversation about reproductive rights, which is so urgent right now?

I found it appalling as a female filmmaker that the doctor was punished for lying to the Attorney General –  but for nothing that he did to a woman without consent. And I am elated at the response from the general public about this film, having those conversations: the millions of people who are now realizing the nuance of rape, of sexual assault, and that these things are not OK. I think once you can establish what Cline did was not OK, it opens the conversations: well, what is OK?

Because you should absolutely have autonomy over your body and you should have those rights. When they’re violated in this way, you can see quite that clearly. And so it really informs the next conversation, which I think needs to be had in this country specifically.

It was very important that at the end of the day, this is a story of consent.

“Our Father” is now streaming on Netflix. Watch the trailer via YouTube.