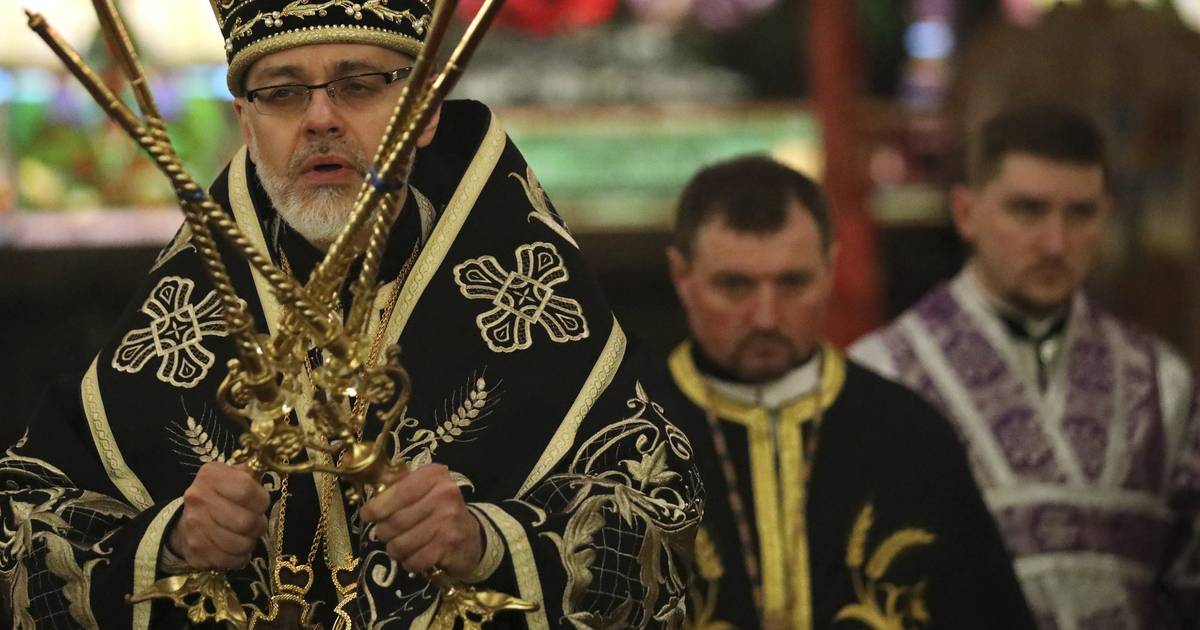 Many Ukrainian families in Chicago and around the world celebrating Orthodox Easter this Sunday, in keeping with their faith, were praying this year that suffering would give rise to joy in their homeland.

Liliya Lymar, 54, the director of Ukrainian Studies at St. Volodymyr Ukrainian Orthodox Cathedral, was one of those people.

After returning from Easter Mass at 5 a.m., Lymar and her family — as in many Ukrainian houses in Chicago — planned tobegin their feast with their blessed Paska bread, eggs, and meats.

But before feasting, she planned to FaceTime her sisters who recently were displaced from Kyiv and are now refugees in Europe to tell them “Він воскрес” (“He is risen!” in Ukrainian). Her sisters would reply, “Indeed, He is risen” and they would begin to eat together, many miles away united by a screen.

“It’s not going to be as joyous as it has been all the time,” said Lymar, 54, who moved to the United States with her family from her home in Kyiv in 1999.

“We are very happy to be in America, to have everything and to have a home, but our minds are always in Ukraine and worrying about the people who we have there,” Lymar said. “Most of our conversations will be about Ukraine and about how the victory will come soon.”

The Orthodox Ukrainian Church is the biggest religion in Ukraine, with more than 67% of the population declaring their adherence to the faith in a 2018 survey by the Razumkov Centre.

Since the Christian Orthodox church is also the main religion in Russia, the U.N. Secretary-General Antonio Guterres appealed on Tuesday for a halt in fighting in Ukraine during the Holy Week, invoking the Easter holiday to plead for a four-day “pause” to allow humanitarian aid and evacuations, The Associated Press reported.

Additionally, the head of Ukraine’s Orthodox church asked clergy and the faithful on Wednesday to forgo night Easter services in areas of the country affected by fighting, fearing Russian bombardments will continue during the Orthodox Easter period, Reuters reported.

At St. Volodymyr Cathedral, 2250 W Cortez St. in the city’s Ukrainian Village neighborhood, more than 50 people attended the 7 p.m. service in Ukrainian and a bit of Englishwith the Archbishop Daniel Zelinskyy, who came to Chicago from the Ukrainian Orthodox Church’s national headquarters in New Jersey.

“His sermon was so good!” said Lymar, who lives near the cathedral.

“It was all about Ukraine because he takes care of a lot of aid that is sent to Ukraine and he was telling his experience of how things are and people were crying. It was a bit of a very somber service, but this is what the Passion of Christ is for us,” Lymar said.

Around noon on Good Friday, Lymar began preparing the dough for her Paska, the traditional egg bread with a soft and airy crumb. These intricately braided loaves are proud centerpieces of the Easter dinner table in Ukraine and other Eastern European countries.

After letting the yeast rise, she made the dough and left it to rest “the Ukrainian American way” in a coffee tin. After baking the Paska, she decorated it with a sugar frosting and colorful sprinkles. “Paska” also means Easter in Ukrainian.

Although many Ukrainian families bake their own Paska breads, many also buy them in some of the bakeries and restaurants in Chicago’s Ukrainian Village such as Shokoland, Ann’s Bakery & Deli, and Old Lviv. Reservations for Paska breads and other traditional Ukrainian Easter meals were completely booked weeks in advance.

The Liturgy of the Great Saturday begins at 10 a.m. in St. Volodymyr Cathedral with the sorrow of Jesus Christ’s death, complete with black fabric decorations. But during the middle of the service, the priests proclaim “Let God arise” and the atmosphere changes.

Saturday at 11:30 p.m., around 500 Orthodox Christians reunite under the roof of the cathedral in observance of the resurrection by the coming of midnight. Families from Chicago and the suburbs traditionally visit the church every year for Easter, but due to COVID-19 some hadn’t been able to, making this year’s celebration even more special.

During the Easter service, the archbishop, the priests and deacons bless every family’s basket with Psyanky (traditional ornamented Ukrainian Easter eggs), raw eggs, Paska and meats.

The service ends at 3 a.m. Sunday, when families return to their homes to celebrate this important holiday for Ukrainian Orthodox Christians.