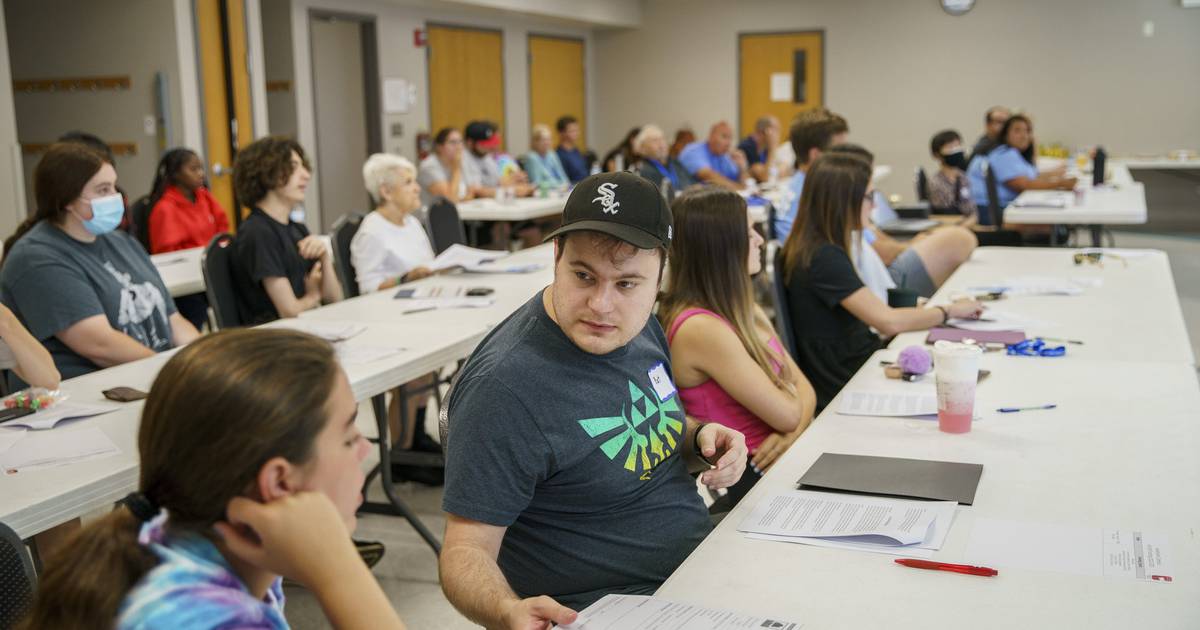 With the first day of classes at Chicago Public Schools fast approaching, the directors at the Carole Robertson Center for Learning were desperately seeking qualified workers to staff its before- and after-school programs for students living in the city’s West and North side neighborhoods.

“It’s really been tough, because we’ve lost three of our six managers, and the kids are going back to school soon,” said Kenny Riley, director of Out-of-School Time at the nonprofit organization, which has centers in the Little Village, North Lawndale and Albany Park neighborhoods.

“We have so many job openings, but we’re trying the best we can, and moving as fast as we can,” said Riley, whose team oversees seven programs at the Robertson Center’s three locations and four CPS-based programs.

The programs, which at midweek had around 10 children on the waiting list, serve about 400 students in kindergarten through eighth grade with two models: daily after-school care, and a slate of clubs.

Riley said officials were forced to trim back some of the offerings for students in the upper grades as they try to accommodate families on the waiting list and incoming kindergartners.

“There’s always been high turnover, but now, some people are leaving to take nanny jobs that are paying them the same to watch one kid, versus watching 20 kids,” Riley said.

The rising demand for before- and after-school care for Chicago-area students is coinciding with a steep shortage of workers, leaving parents and care providers scrambling to find solutions just days before the start of the 2022-2023 school year.

According to a recent survey by the Washington, D.C.-based Afterschool Alliance, just like the health care, hospitality and airlines industries, before- and after-school programs across the U.S. are facing steep challenges in recruiting, training and retaining workers.

Around half of the participants in the Alliance’s survey reported they are “extremely concerned” about staffing shortages, with 31% citing extreme concerns about “maintaining adequate staff through health concerns and new procedures.”

“We’re facing a lot of challenges, because we’ve lost a lot of the workforce, and this is a hard time to bring people back,” said Erik Peterson, the Alliance’s senior vice president of policy.

As more employees go back to work in offices this fall, the need for child care is increasing, Peterson said. “I’m hearing from parents who are looking for solutions and options, and lots of folks are having to make hard decisions,” he said.

Before the COVID-19 pandemic, Brian Friedopfer and his wife never had a problem enrolling their daughter in after-school care.

Now, with school set to begin in less than a week, they’re wait-listed for the program at their children’s Northbrook school. They tried to enroll their fourth grader and kindergartner as soon as registration opened online, but the program was full within minutes, he said.

He and his wife have looked into other local before- and after-school care options, but they are either also full or cost significantly more than the school’s program, he said. They’ve explored the possibility of hiring a nanny, “but it’s almost impossible to find a part-time nanny for an hour in the morning and two hours in the afternoon,” Friedopfer said.

Friedopfer travels frequently for work, and his wife is a nurse who doesn’t have much flexibility in her schedule.

On Wednesday, officials at the Illinois-based ACT Now, After School for Children and Teens, said the after-school workforce statewide and across the nation “is facing an unprecedented staffing crisis.”

Pointing to historically low wages, officials said those in the after-school workforce typically make less than $45,000 a year, with few prospects for “advancing their careers despite high levels of educational attainment.”

With most of the after-school workforce hailing from high minority and low-income backgrounds, 50% of workers must supplement their income, despite nearly 70% having a bachelor’s degree or higher, officials said.

Michael Holmes, executive director of The Black Community Provider Network, which aims to support families with educational resources and social service programs, said Wednesday that even prior to the pandemic, “it was always a struggle and challenge to maintain staffing, and create sustainability.”

“These programs are so needed, and should be a part of the fabric of the community,” Holmes said, adding that for years, “single parents have not had places for their kids to attend, and the pandemic has exposed that.”

A CPS spokeswoman said while it is early, the district is not expecting a staffing shortage for its out-of-school enrichment programs, which begin three weeks after school starts Aug. 22.

“We are hopeful that with nearly 91,000 students engaged in summer programming — including some of the same out-of-school programs we offer during the school year — we will not see a pause in staffing levels,” spokeswoman Mary Fergus said in a Thursday statement.

Around 940 students are enrolled and 80 students remain on a waiting list for the Arlington Heights Park District’s Children at Play program, said Katie Waszak, supervisor for the program and day camp at the park district.

The organization has seen child care needs increase as more families now have both parents working, rather than just one, Waszak said.

“I have heard a lot from parents that their schedules are changing, they are going back into the office, or other child care options are not an option or do not work for their family,” she said.

Half of Children At Play’s 12 sites have waiting lists, Waszak said. While it is not unusual for the program to have waitlists at some of the schools it serves, Waszak said increased demand coupled with staff shortages this fall has posed challenges.

The program, which pays starting wages of $15 to $18 an hour and part-time benefits, plans to accommodate more students as more staff is hired, Waszak said.

For more than 30 years, the Northbrook Park District’s Adventure Campus has been considered “an essential service for working families in the community,” said Katie Kotloski, recreation division manager for the north suburban park district.

So when the program paused some of its offerings during the early days of the pandemic, Kotloski anticipated employees would be eager to get back to work once program was back in full force.

“I thought after the pandemic relief money ended, they would be back, but that was foolish thinking, because most did not come back,” Kotloski said.

With 167 children on a waiting list for the fall at one point, Kotloski said leaders at the park district concluded the only way to solve the staff shortage was to raise salaries and offer a $1,000 signing bonus.

Weeks later, a multigenerational crew of 55 new hires, ranging in age from high school to retirees, had signed on to care for the 350 children enrolled in the park district’s before- and after-school programs held on site at five local elementary schools, Kotloski said.

On Thursday, 15 children remained on the waiting list, she said.

“We started training our new employees this week, and we are cautiously optimistic we’ll get those 15 students in sooner than later,” Kotloski said.

Meanwhile, staff at the city’s Carole Robertson Center are also still recruiting new hires as they try to cut down the waiting list. The employees who staff the after-school care offerings live in the community, and many are parents or grandparents with children in the programs, said Riley, the director.

“The working parents in the communities we serve never had the luxury to work at home, because they’re essential workers employed by restaurants, hospitals and child care centers,” Riley said.

Yet another challenge in recruiting new hires at after-school programs is some members of the community are reluctant to work directly with young children due to health and safety concerns stemming from the pandemic.

“We’re still also aware that COVID is not gone, and we’re focused on keeping our sites open,” Riley said. “We’re very fortunate to not have had any problems this summer, but it’s still here.”