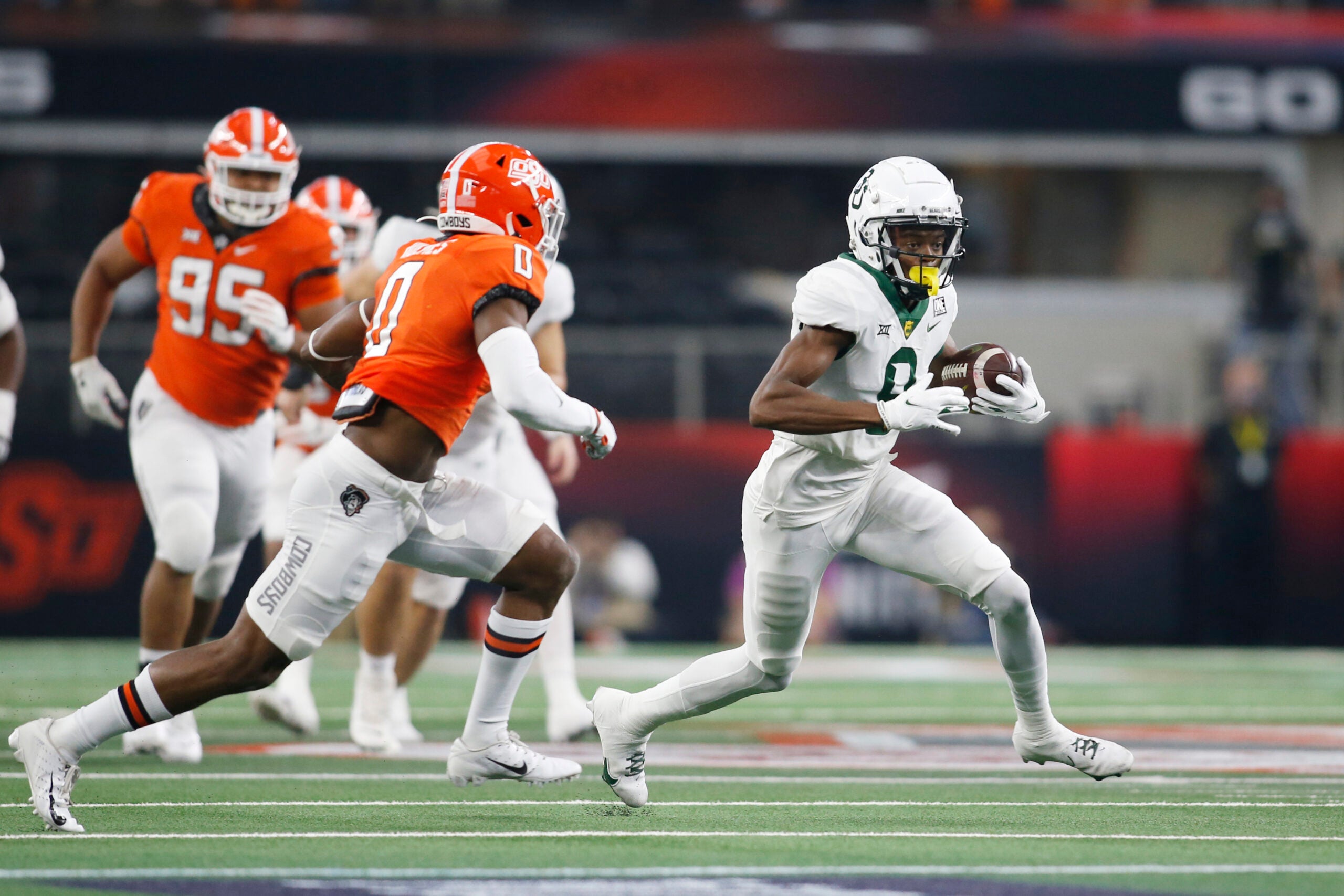 Bill Belichick absolutely saw that, and he’s trying to make sure it doesn’t happen again.

First, the Patriots traded up in the second round to nab Baylor receiver Tyquan Thornton — one of the fastest receivers in the entire draft — and an undersized but electric cornerback in Houston’s Marcus Jones who can fly as well.

One player will keep corners and safeties up at night with his video-game deep speed. The other will become an in-house leader to return kicks and could eventually have some success running after the speedy receivers flocking into the AFC East.

Get fast, or fall behind.

There appears to be a bit of a pattern in the draft so far for the Patriots: taking a guy they believe in perhaps more than everyone else.

On Thursday, it was guard Cole Strange. Friday night, it was Thornton, whom ESPN’s Mel Kiper admitted he didn’t believe would come off the board until the fourth round.

PFF’s Doug Kyed cast some doubt on that, reporting that multiple teams actually had Thornton slotted ahead of the likes of Alec Pierce, George Pickens, and Skyy Moore — options most people figured would go high in the second round. That would be yet another example of media draft boards simply missing on what teams are truly valuing.

In Thornton’s case, the draw is speed. Pure and simple. His 4.28 40-time at the NFL Combine almost broke the internet, and his acceleration in terms of his 10-yard and 20-yard splits is also incredibly rare.

He’s not yet a refined receiver in terms of his route-running, and his agility drills are poorer than the Patriots typically like. Thornton now becomes just the third Patriots receiver drafted since 2009 to post a 3-cone time worse than seven seconds.

But there’s something to be said for simply putting the fear of God into a defense by being able to run by them no matter how far off they play you, and Thornton can do that better than almost any receiver in this class except Jameson Williams. He also has good ball-tracking skills and body control to haul in underthrown or contested balls and competes hard as a blocker — something the Patriots will surely appreciate.

A good comp for Thornton might be Carolina receiver Robbie Anderson, whom the Patriots had interest in trading or signing in the past: thin but explosive and dangerous with the right quarterback.

The Baylor receiver also told media during a conference call that he hopes to emulate the route-running savvy of Davante Adams as his career progresses.

“I love how he creates separation at the top of the route, and line of scrimmage as well. I’ve tried to mimic that with my releases and route running, while adding speed to it,” he said.

Right now, he’s purely a vertical threat, though an amazing one at that. He also doesn’t have to be more than that immediately with a full deck of receivers ahead of him on the depth chart. By the time the wide receiver room theoretically starts to clear out in 2023, Thornton will have had plenty of time to work with coach Troy Brown on the finer points that will start taking his game up a notch.

Jones might not excite anyone from the standpoint of his physical stature — 5-foot-8 and 174 pounds with below-average length for a cornerback — but two things are true: he’ll fight you for everything he’s worth, and he can do just about anything on a football field you ask him to.

Despite his size limitations, he racked up impressive production playing the football with 13 pass breakups and five interceptions last season. He doesn’t back down from big receivers, even winning a 50-50 ball against 6-foot-3 Cincinnati receiver Alec Pierce in the end zone when their teams played each other.

Jones also flies around like a missile on defense, hustling to chase down runaway ball-carriers and throwing his body in passing lanes with abandon to separate receivers from the ball.

Though he’s almost exclusive going to be a slot corner, he might eventually be an interesting coverage option against smaller, shifter receivers like Tyreek Hill, Elijah Moore, and Isaiah McKenzie in the AFC East if the Patriots simply want to counter speed with speed.

Throw in the fact that he’s an incredibly prolific return man, taking back nine combined kicks (six kick returns, three punts) for touchdowns in his career, and you have the kind of versatile yet dynamic player the Patriots love.

But that’s not all: Houston even got him on the field as a receiver at times last season, and he actually registered 10 catches for 109 yards and a touchdown. Will Belichick — the man who gave Brown a chance to play both ways and contribute as a return man — do the same for Jones?

Before either Thornton or Jones take the field, though, the mandate for the Patriots seems clear so far in the draft: get faster and more athletic, or the AFC East will eat you alive.

As for the rest of the Patriots’ draft, that will have to wait until Saturday: the team traded away the No. 94 pick to move out of the third round in exchange for the 137th overall pick and a third-round pick in the 2023 NFL Draft, allowing the Carolina Panthers to move up and select quarterback Matt Corral.

New England will now have seven picks going into Day 3, including three in the fourth round.