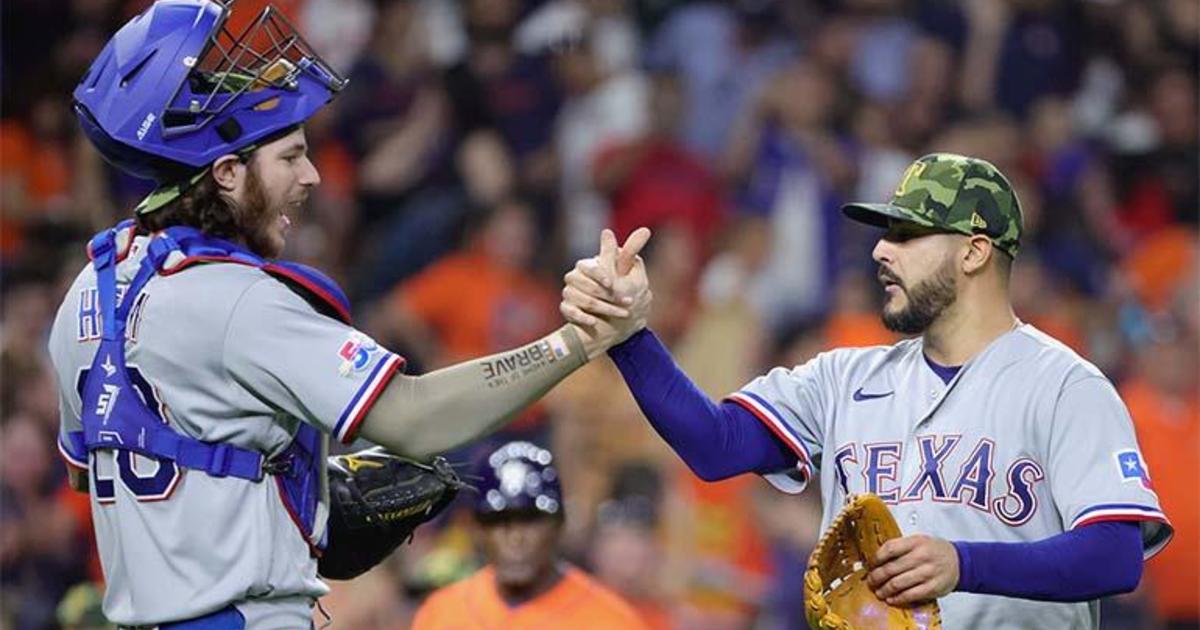 HOUSTON (AP) — When manager Chris Woodward walked out to the mound with two outs and two on in the ninth inning, Texas Rangers starter Martín Pérez wasn’t worried about being taken out.

It was the first complete-game shutout for Texas since Kyle Gibson beat the Astros 1-0 on Sept. 16, 2020.

“In an age of follow-the-numbers, follow this, you follow your gut on that one,” Woodward said. “Something special could happen there. It might not, you never know. It’s life, but at the same time, I trusted Martín to make pitches there. He did.”

Pérez (3-2) struck out five, walked one and threw 108 pitches. The left-hander won his third straight start and has a 1.64 ERA in eight outings this season.

“Throw strikes,” Pérez said of what he’s done differently this year. “I’m not 21; I’m not 22. I’m 31, and I’ve been learning a lot from a lot of guys. … Now, I understand how hard it is to hit the ball, so throw your pitches. Throw the pitch where you want, and it’s not easy. The hardest thing in baseball is to hit the ball, and when you go out there and throw your pitch where you want it, good things are going to happen.”

Pérez last threw a shutout on April 23, 2014, against Oakland. He spent his first seven seasons with Texas and later played for Minnesota and Boston before rejoining the Rangers this year.

“When you’re young, you’re trying too many things, and sometimes you just want to go out there and throw hard,” Pérez said. “It’s not how hard you throw. It’s how you mix your pitches and where you throw the ball.”

Pérez retired 12 of the first 14 batters he faced before Jeremy Peña got Houston’s first hit in the fifth with a two-out single.

With two outs in the Houston ninth, Alex Bregman and Kyle Tucker singled. But Pérez got Yuli Gurriel on a flyout to left field to end it.

“That’s his game,” Woodward said. “That’s the way that I look at it. He had gotten out Gurriel. That was the fourth time facing him, but he deserves that opportunity. Those things don’t happen very often — complete-game shutout.

“Maybe all the analytics will tell you to take him out right there, but he’s been so good for us. He’s built up a ton of trust in a short amount of time with me, so I felt like I owed it to him to leave him out there.”

The Rangers snapped an 11-game losing streak to the Astros in Houston, winning for the first time at Minute Maid Park since Sept. 16, 2020.

“He threw a good game against us,” Houston manager Dusty Baker said. “He was keeping the ball down. He was cutting some. He was sinking others, which creates a double play, and he had a really good changeup. He didn’t use his breaking ball much, but he was splitting the plate. He can pitch.”

Kole Calhoun gave the Rangers a 1-0 lead in the fourth with a home run.

The Rangers tacked on two more runs in the eighth. Mitch Garver scored on an errant throw to third by reliever Rafael Montero on a bunt attempt by Eli White. Two batters later, Marcus Semien added an RBI single.

Cristian Javier (2-2) yielded one run on three hits with a career-high tying nine strikeouts in six innings. Javier rebounded nicely after being tagged for seven runs in 3 2/3 innings in his last outing against the Nationals on Saturday.

“Improvement on his location because he was getting behind in the last (game),” Baker said. “He was throwing that high fastball (in the last game), but it was too high. This time he was in the strike zone. He threw the ball well. … He was awesome tonight.”

Astros: RHP Jake Odorizzi, who was placed on the injured list on Tuesday, played catch prior to Friday’s game. Odorizzi was not wearing a boot four days after he injured his lower left leg and fell to the ground.

The Rangers recalled RHP Rick Snyder from Triple-A Round Rock and optioned RHP Josh Sborz to Round Rock.

Houston RHP Justin Verlander (5-1, 1.38 ERA) will be looking for his sixth straight victory when he starts Saturday against Texas RHP Jon Gray (1-1, 5.73).