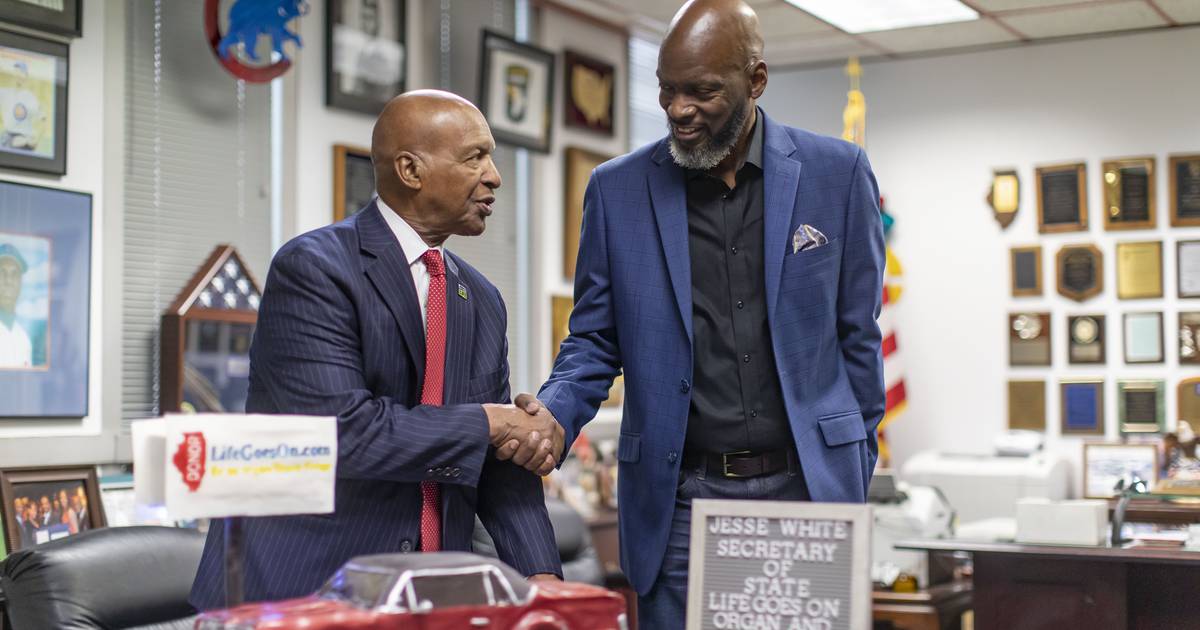 One year ago, Phillip Hanks was enduring the first of two surgeries. One was almost eight hours to give him a new intestine, stomach, liver and pancreas, The following day, Hanks was back on the operating table to get a kidney.

Hanks, a father of six, received a multivisceral transplant — a simultaneous transplant of multiple organs — at Indiana University Health in Indianapolis in April 2021. Since then, Hanks, of Joliet, said he doesn’t want to say it’s been easy, but his health has been “smooth sailing.” No hiccups on the health front, no drama.

In fact, Hanks celebrated birthday 51 on Aug. 23. He’s still driving to Indianapolis for hospital checkups, but not as frequently.

“I feel great. I’m back in the gym slightly, trying to get more strength,” he said. On Tuesday, the end of National Donate Life Month, Hanks was celebrating the transplant milestone in Illinois Secretary of State Jesse White’s office, surrounded by family. White read the Chicago Tribune story about Hanks’ journey in 2021, and recruited him to be a spokesperson for the secretary of state’s Organ/Tissue Donor Life Goes On program and registry. As one of 12 spokespeople, Hanks has been talking to youth in schools and at secretary of state facilities in the area. He said he’s averaging a couple dozen talks every two weeks, and even shot a public service announcement.

White calls it a “perfect match.” “He’s been there, done that and now he’s able to tell his story and spread the news of this wonderful program.” White presented Hanks with a commemorative framed license plate with 5ALIVE on it. A family friend made a replica of his dream car (a 1967 Mercury Cougar XR7) in cake form to commemorate the occasion of his second chance at life through organ donation.

“Phil has been so incredibly instrumental and inspiring to the program. Our mission is to strengthen the Illinois organ and tissue donor registry through outreach and registration initiatives and one of the ways we are able to do that is partnering with individuals, organizations, faith-based institutions, learning institutions … we have coordinators go out and lead the charge and serve as advocates to help us with that mission,” said Connie Boatman, director of Life Goes On. “Phil hit the floor running. It’s been incredible to have him on board.

Boatman said since White’s tenure in office, which began in 1998, Life Goes On has registered 7.3 million people for the donor program.

Hanks still gets teary-eyed when reliving April 26. He was on the transplant list by Dec. 31, 2020, and received his organs four months later, from two donors. Hanks’ wife, Tiva, calls it a miracle.

“I’m feeling very blessed,” she said. “We were reminiscing about the actual day: He was asking me questions about what was I feeling? How did it go? How long did it take? It was a mind-blowing experience. I was there by myself in the middle of COVID and it was scary, I spent a lot of the time on the phone with my auntie. My family was really my rock. I spent all that time in the waiting room, just talking on the phone, texting the family, giving them updates on where they were in the procedure and then afterward, she and I talked to the doctors and were felling very grateful that everything went so well. It was an out of body experience to say the least.”

Hanks was beaming from ear to ear about his supportive family getting him through it all, sister, aunt, sons and daughter. Tuesday, his 4-month old granddaughter (Gianna Guyton ) was by his side, serving as motivation

“We don’t realize how close we are to it until it happens to us, that’s why it’s important for us to get involved,” Boatman said. “That’s why what Phillip does is so important because you have to have representation. He is an awesome representation that it does work. Black people do get organs and you don’t have to be rich, you don’t have to be a celebrity. It’s important that we educate ourselves and we exercise our due diligence to share our positions with our families to let them know what our wishes are.”

Illinoisans can register with the secretary of state’s Organ/Tissue Donor Registry at LifeGoesOn.com, by calling 800-210-2106 or by visiting a driver services facility.