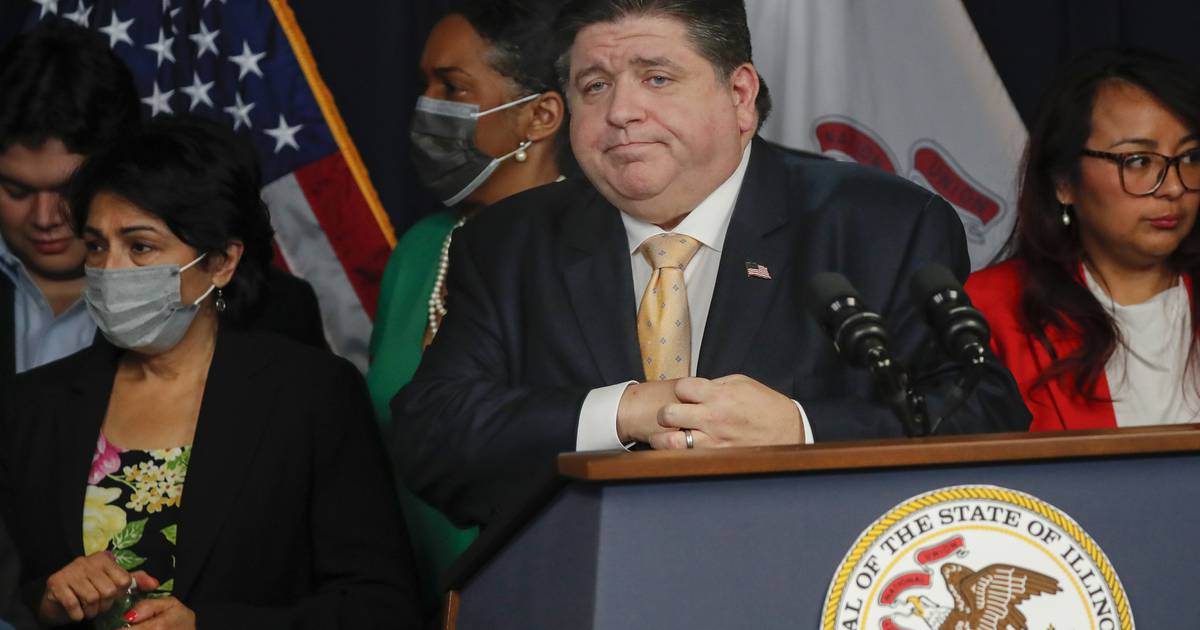 The unprecedented leak of a draft U.S. Supreme Court opinion that would strike down Roe v. Wade thrust abortion to the fore of an already heated election year in Illinois and quickly became a call to action for candidates and advocates on both sides of one of the most contentious issues in American politics.

Gov. J.B. Pritzker and dozens of other Illinois Democrats — facing election-year headwinds on crime, corruption and the economy — gathered at the James R. Thompson Center in the Loop early Tuesday to extol their efforts in recent years to ensure abortion remains legal and accessible in the state in the event Roe is overturned and to rally supporters for the potential fights ahead.

“Reproductive rights and bodily autonomy are the most basic, fundamental human rights,” said state Sen. Cristina Pacione-Zayas, a Chicago Democrat. “This is not a drill, this is not a test, nor a dress rehearsal. … This moment is the rallying cry and a defining time that draws a line in history.”

For Republicans in solidly Democratic Illinois, the potential decision is a double-edged sword: a long-coveted victory for the party’s conservative base but one that could cause headaches in the general election as the GOP seeks renewed relevance with constituencies like suburban women. At the same time, anti-abortion groups traditionally aligned with the party will use the impending ruling to drive their backers to the polls.

[ [Don’t miss] If Roe v. Wade is overturned, what’s the impact on abortion access for Illinois and its residents? ]

On social media Monday night and at their emotional news conference Tuesday morning, Democratic leaders warned that Republicans and opponents of abortion rights would next seek to erode legal protections for same-sex marriage, transgender rights and access to birth control. Democrats have worked to strengthen state laws on all of those issues in recent years.

Those efforts all are at risk if the GOP is able to make inroads in the reliably Democratic state, said Pritzker, who is seeking a second term in November.

Since he took office in 2019, Pritzker has signed laws establishing abortion as a “fundamental right” and eliminated the requirement that abortion providers notify the parent of minors seeking the procedure, among other measures. His Republican predecessor, Gov. Bruce Rauner, signed a bill in 2017, approved by the legislature’s Democratic supermajority, that repealed a so-called trigger law that would have made abortion illegal if Roe were overturned — a move that alienated him within the GOP.

While it would take Republican victories of historic proportions for that to happen in a single election, Pritzker also stressed the importance of supporting candidates for Congress who will work to expand protections for abortion rights at the federal level.

“There are people running for office on the ballot in 2022 who will stand up for women’s rights, reproductive rights, and there are others who would vote to take them away,” he said.

One of the candidates who would support reproductive rights is state Sen. Jacqueline Collins of Chicago, who is among 17 Democrats vying for the chance to replace retiring U.S. Rep. Bobby Rush in the newly drawn 1st Congressional District. She called the draft opinion “a deliberate attack on women — on poor women, on women of color and on young women.”

As the GOP looks to cut into the Democrats’ supermajorities in the Illinois House and Senate and win back the governorship or another statewide office in November, some party members were trying to shift the focus back to the issues they’ve already been running on.

His House counterpart, GOP Rep. Tim Butler of Springfield, criticized Pritzker for his efforts to promote Illinois as a destination for people seeking abortions.

“We should attract people to the state of Illinois by economic development and having a state that embraces creating jobs and things like that, not being the leading abortion factory in the Midwest,” Butler said.

But the party’s legislative leaders, Rep. Jim Durkin of Western Springs and Sen. Dan McConchie of Hawthorn Woods, had no immediate comment on the draft ruling.

Republicans have good reason to want to avoid the abortion issue. Polls from The Associated Press in the past two general elections show the party’s position was at odds with the majority of the state’s voters.

Among Illinois voters in the 2018 governor’s race and the 2020 presidential race, about two-thirds supported abortion rights, according to survey results from AP VoteCast conducted in conjunction with NORC at the University of Chicago.

Two factions appeared at Chicago Federal Plaza on Feb. 13, 1971. One group, left, rallied for support of legalized abortion and the other rallied against it. (Michael Budrys / Chicago Tribune)

Three of the five major candidates for the GOP nomination for governor cheered the draft opinion written by conservative Justice Samuel Alito.

Notably silent was Aurora Mayor Richard Irvin, who calls himself “pro-life” but has said little beyond that when asked about abortion. An Irvin aide said the campaign would not comment until the Supreme Court issues a final ruling, something expected in the next two months, potentially after the June 28 GOP primary.

Irvin is the most moneyed Republican candidate seeking to challenge Pritzker, having collected $20 million in campaign funds from Ken Griffin, the state’s wealthiest person and an ardent foe of the governor.

As an unsuccessful candidate for mayor in 2009, a post he won eight years later, Irvin assailed the tactics of Planned Parenthood for opening a women’s health care clinic in the city, which he said was “bad for Aurora.”

Irvin’s silence on Tuesday, though, reflects the cautious nature he has displayed as a candidate who has made few public appearances and the risks he’d be taking with a key voting bloc, socially moderate suburban women, by speaking out more forcefully on abortion.

Also silent on the draft ruling was Irvin’s running mate, Rep. Avery Bourne of Morrisonville. She has been a leading anti-abortion voice in the House Republican caucus in recent years.

Calling himself “unapologetically pro-life,” Rabine said in a statement that he welcomed “the court’s reversal of this long-standing precedent” that “has allowed for the murder of thousands of unborn children.”

Two other Republican candidates also expressed support of the potential ruling, while another, former state Sen. Paul Schimpf of Waterloo, did not respond to a request for comment.

On Twitter Monday night, cryptocurrency venture capitalist Jesse Sullivan wrote: “When we heard the incredible news tonight we dropped to our knees and said a prayer as a family in gratitude for all the lives that will be saved. And then we said the pledge of allegiance. The flag looks different after this ruling — it shines even brighter.”

State Sen. Darren Bailey of Xenia, who has been endorsed for the Republican nomination for governor by the state’s major anti-abortion groups, said he was praying that the court would reverse Roe.

Speaking on a Facebook video, Bailey said Pritzker and Democratic lawmakers “want to come together and try to figure out how they can continue to destroy life, how they can make Illinois the mecca of, the abortion capital of the world.”

“Once Roe v. Wade is overturned and once abortion is made illegal then we have to turn around. That’s not where it stops. We’ve got to work together, the church and city groups, and then provide the real solution of helping people be able to be productive in life,” he said, criticizing the Pritzker administration for what he contends are policies that make it more difficult to adopt a child.

Bailey contended Pritzker has said he will allow doctors from other states who lose their license for conducting an abortion to come to Illinois and get their license restored and practice in the state.

Bailey’s comments were an apparent reference to a measure approved in the House this spring that would prevent providers of abortion services from losing their Illinois licenses if they were subject to discipline in other states as a result of bans on the procedure. The proposal has yet to be taken up in the Senate.

Getting that bill to Pritzker’s desk is one example of the ways in which Democratic lawmakers can continue to protect and expand access to reproductive health services in Illinois, state Rep. Kelly Cassidy, a Chicago Democrat who was lead sponsor of the 2019 Reproductive Health Act, said at Tuesday’s news conference.

Illinois statute widely protects abortion rights in the state but more work can be done to further solidify that “force field” and assist people coming from other states to seek the procedure, Cassidy said.

Last fall, Planned Parenthood of the St. Louis region estimated that 14,000 women would come from Missouri, Arkansas, Kentucky, Oklahoma and Tennessee for abortion services at two clinics in southwestern Illinois if Roe was overturned. In 2020, 9,686 out-of-state women received an abortion in Illinois, according to figures from the Illinois Department of Public Health.

“Our responsibility — and I challenge each and every one of you to get as creative as we can — is to think about what else our force field needs,” Cassidy said. “What else do the women and pregnant people coming from other states that restrict abortion need when they come to us?”