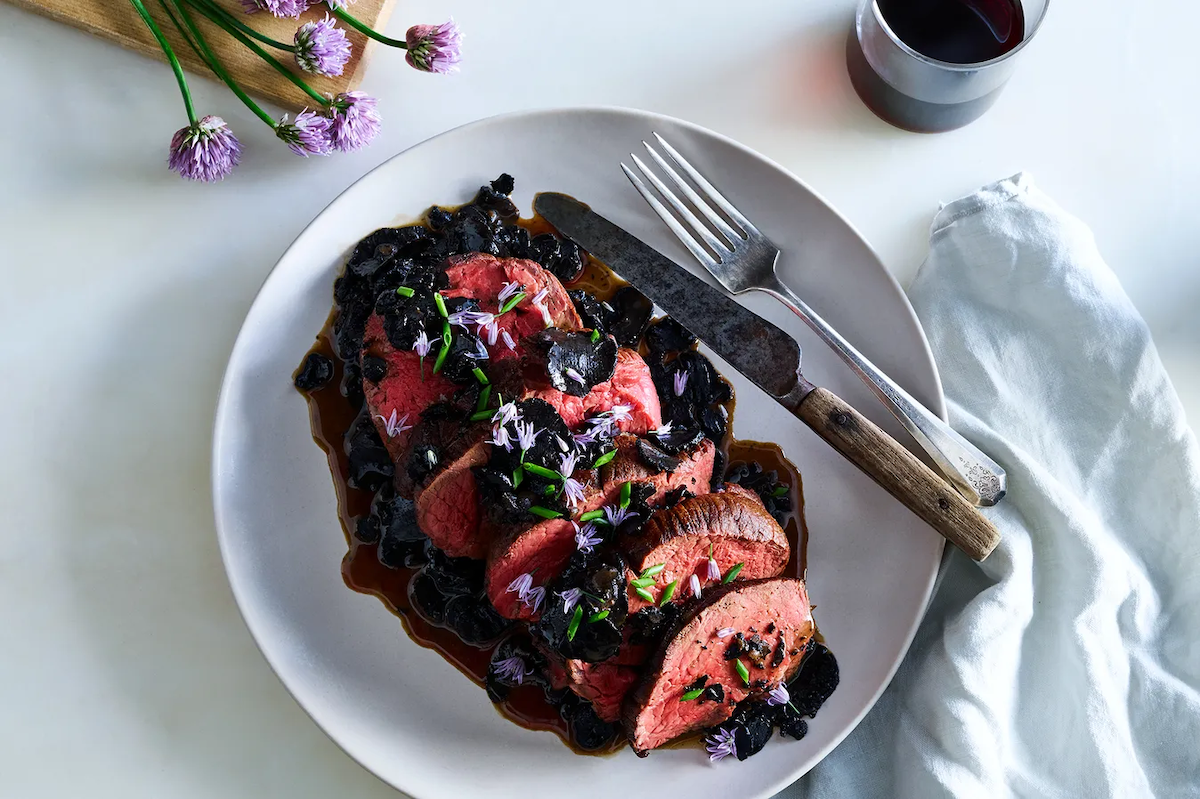 “Do you want to carve or plate?” Matt asks me as we roll the service cart into the aisle.

We set up the cart earlier the way we learned in TWA flight attendant training: We rolled silverware into white napkins and placed warmed dinner plates beside them on the second rack; the serving bowls of chateau potatoes and white asparagus sat next to the silver gravy boats of Bearnaise sauce; and in the center, the showpiece that a TWA first class dinner was famous for, a double chateaubriand. “Said to be created by Montmireil, personal chef to Viscomte Chateaubriand, the Great Writer and Statesman of the Napoleonic Era,” the menu boasted.

Matt and I have been on either side of TWA first-class dinners since 1978. The only difference tonight is that we are serving this meal to friends in my loft in Providence, Rhode Island. And neither of us has worked for TWA since 1986 when a labor strike ended our careers. Since then, Matt has gone on to a career as a flight attendant with American Airlines and I have written over a dozen books. And now, 25 years later, we are reliving relive the Golden Age of Flying by recreating those long-ago dinners for our loved ones. We fall into our roles easily, as if no time has passed.

“I’ll carve,” I say, and just like that, time vanishes. Instead of two middle-aged people dressed in black, me with my original name tag pinned to my dress, serving eight friends, we feel like two twenty-somethings again, in our snappy Ralph Lauren uniforms on a glamorous 747 flying somewhere over the Atlantic. Funny how a perfectly cooked chateaubriand can send us back to a time when the world was at our feet and possibilities seemed endless.

I wanted to work a TWA first-class dinner one more time, an idea born while I wrote my memoir Fly Girl about my years 35,000 feet above sea level. As I reconnected with that naïve 22-year-old I used to be and relived all the mistakes and victories of my 8 years as a flight attendant, memories came back in technicolor (mostly TWA red, which was the color of our blankets, amenities kits, and carpeting that led to the gates at Terminal 5).

Before the term “flight attendants” came into usage in 1976, TWA called us “air hostesses,” because they wanted their passengers to be treated like they were our guests. It was a time when passengers still dressed up to fly — no joggers or slip-on sneakers in sight. I remembered tying my striped scarf around my neck, swiping my magenta lipstick (to match the stripe on my uniform jacket sleeve) across my lips, buttoning my blazer and standing at the boarding door of a jumbo jet welcoming passengers aboard, nervous and excited. I remembered walking past Diana Ross, who was asleep under a gigantic fur coat, and making a hot fudge sundae for Richard Gere. And the time on one of my first flights when a tomato sailed off my tongs as I tossed a salad and landed in the gray flannel lap of a businessman seated in 2D. I reminisced about walking through the aisles, passing out magazines and playing cards and stationery sets with the TWA logo to a plane full of passengers.

A small part of me wanted those years back. I didn’t strive to be that young, naive woman again, the one who once asked a family of five dressed all in black if they were a folk singing group — they weren’t; they were on their way to their mother’s funeral — or the one got screamed at for accidentally threw away the caviar ice mold. I liked my life now, as a poised and confident middle-aged woman.

Matt flew from LAX to work first class with me one more time. My daughter, Annabelle, printed menus and boarding passes exactly like the ones back then. The guests — who included an Oscar winner, a Sopranos actress, a chef-restauranteur, a business executive, and two magazine editors — dressed as they would have back then: blazers and ties, designer dresses and high heels. As soon as they arrived, we poured champagne and showed them to their seats. Warmed nuts were served in TWA ramekins, which I purchased on Ebay, were served with cocktails. Wine flowed. Jumbo shrimp cocktail with cocktail sauce was eaten. And then that chateaubriand, wheeled out by Matt and me.

At one point during the service, Matt’s eyes met mine and we paused, smiling at each other. We understood that we couldn’t really go back. But for one night, with all the miles — literal and metaphorical — we’d traveled between that job and tonight, we still had it, it being that elusive thing TWA saw in us when we were fresh out of college and ready to leap into the world.

I carved two pieces of perfectly pink meat, placed them on the plate, and we moved forward.