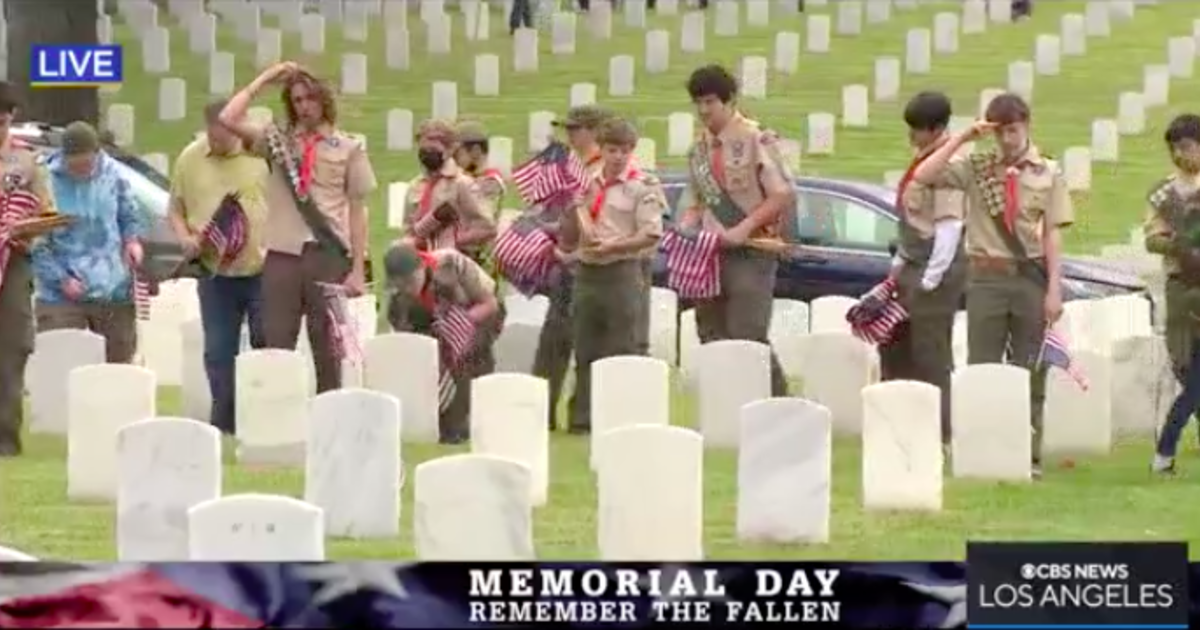 Dozens of scouts gathered at Los Angeles National Cemetery Saturday morning to place flags on the graves of the fallen military members buried at the cemetery.

Both Boy Scouts and Girls Scouts, with Eagle Scouts and Brownies included, joined the forces of members ranging from the ages of 5 to 18 as they paid honor at each of approximate 90,000 gravesites.

Volunteers began showing up as early as 7 a.m. to begin preparations and set up the event which officially began at 8 a.m.

Troop Leaders set up the event to make sure that scouts understand the significance of Memorial Day and honoring the lives of those lost during service.

Scouts would take a brief moment at each grave, placing the flag before saluting and reading the name of each veteran buried at the cemetery.

Glenn Schecter, with the Boy Scouts of America, detailed how the flags were purchased through a United States-based manufacturer, and are used until they can’t be flown anymore. At which point, they are retired and replaced.

Each scout was given around 20 flags to place.

“We buried my father here six years ago,” Schecter continued, noting that his father, Mort, was a tail gunner in the European theater in World War II, who flew in 35 separate missions. “Every year I come here and place a flag on his gravesite.”

CBS reporters were on hand to speak with several scouts and troop leaders, who detailed just how important the event, and the meaning behind it were to them.

“It just shows the significance for what they served and who they served for,” said Ethan Petersen, a 17-year-old Boy Scout in his fifth year of partaking in the Memorial Day event. “They have to be remembered for that.”

“Every time I put a flag I think about them and think what it meant to them to die for their country,” said Celeste Rios, a member of the Girl Patrol of Boy Scouts. “I almost get chills thinking about it.”

“I just feel like in a way, it comes natural,” said Eddie Stanton, a boy scout in his third year of participating in the event. “If someone’s willing to sacrifice their lives and their freedoms for you, it’s your job to respect that and help them out in any way you can.”

Both of Stanton’s grandfathers served in the military, one in the U.S. Coast Guard during World War II and the other a survivor of Pearl Harbor, as well as his father, Marv, who was in the Army Reserves during the Vietnam War.

Additionally, attendees were treated to Civil War reenactments, an appearance by the descendants of the Buffalo Soldiers on horseback and various other military-themed exhibits were available prior to the placement of the flags.