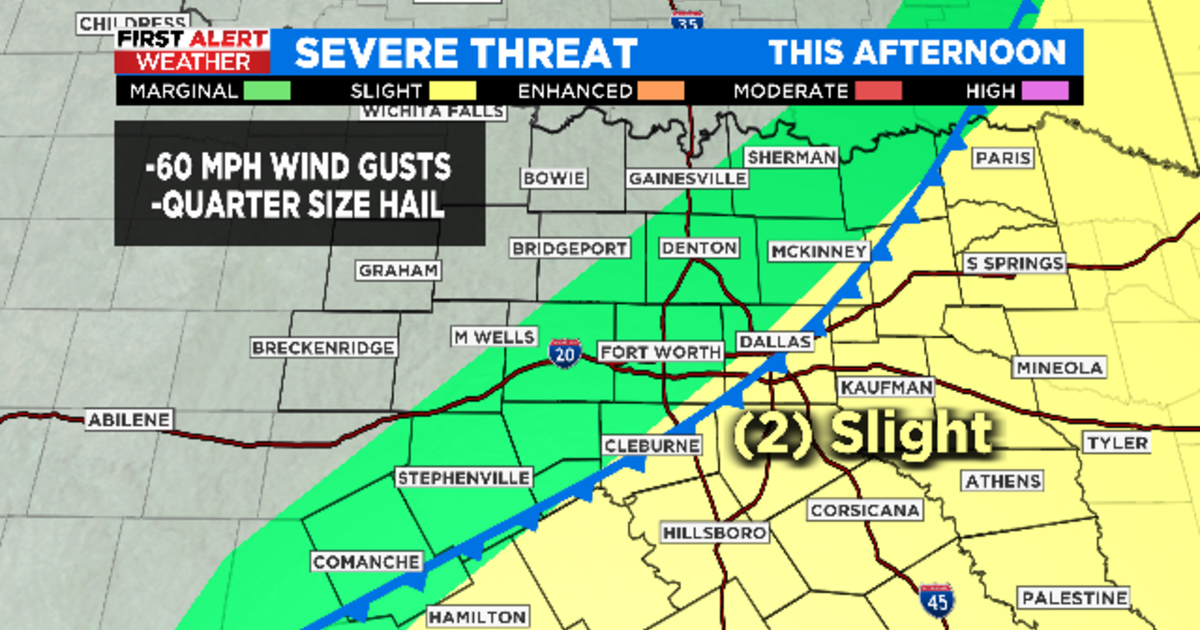 NORTH TEXAS (CBSDFW.COM) – A cold front will sweep over North Texas on May 21, and by mid-afternoon I expect it to be moving through the Metroplex.

We’ll briefly get in the low 90s before the winds turn to the northwest and get rather gusty. Storms will develop this afternoon ahead of the front. They’ll start right around Dallas County before moving quickly east.

One-inch diameter hail and 60mph winds are possible with these storms. The risk is down the I-45 corridor and from Kaufman County to the east.

The cold front will drop the temperatures about 20 degrees over the span of a couple of hours. By this evening, it’ll be all the way down into the 60s with strong winds.

Tomorrow will be NOTHING like the weather we’ve had for the last two weeks. The longest streak of 90 degree days at DFW this early in the season finally ends.

Tomorrow we’ll have highs in the low 70s with some rain the first half of the day in our eastern counties. This is but the first day of rain chances and cooler weather.

This is has been the hottest start to May on record, but all that is changing by this afternoon. This cooler airmass stays with us all the way until Thursday. Several rounds of occasionally heavy rain are expected Monday through Wednesday. Some significant amounts of rain could pile up over the four day period.

Jeff joined CBS 11 and TXA 21 in December 2010. He came to North Texas from Nashville, where he spent the past 11 years, most recently as the morning meteorologist at WKRN-TV. His career has also taken him to Kansas City, Mo., where he was the senior meteorologist at KSHB-TV.