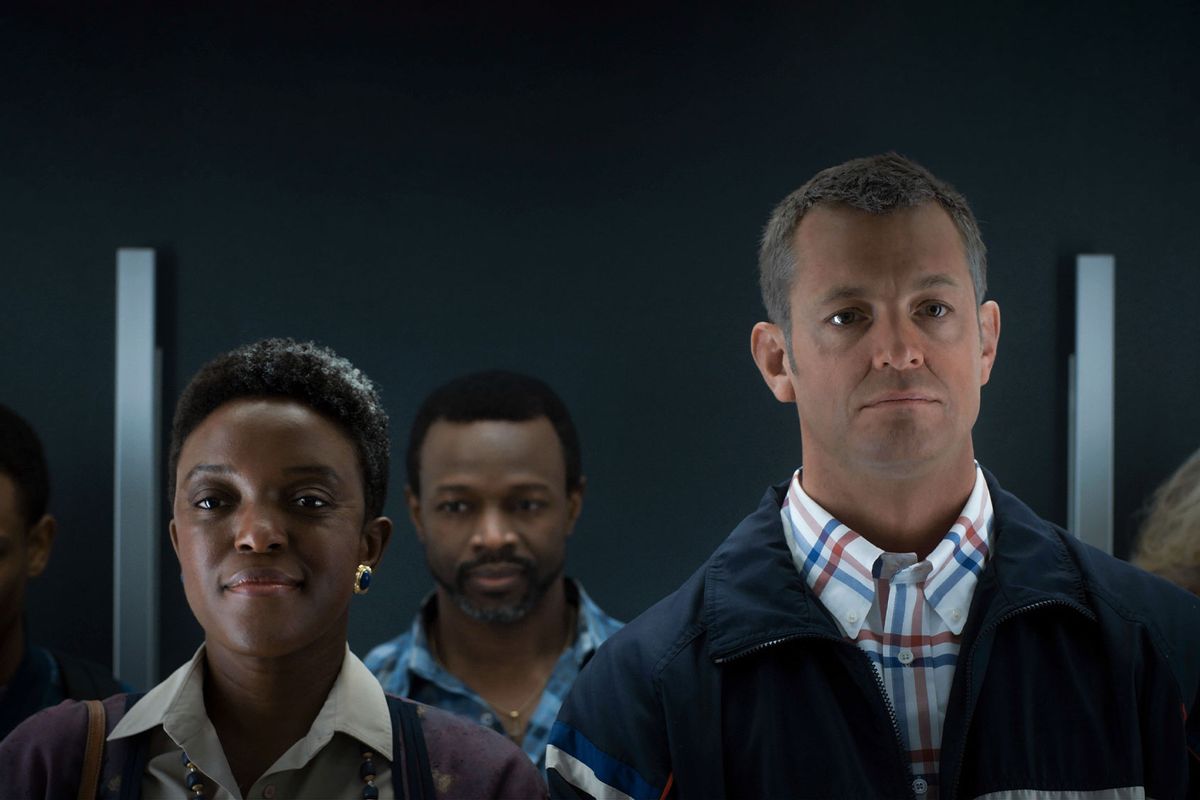 One thing full-time single moms get a little tired of? When someone’s partner goes away for the weekend, and the spouse who stays behind with the kids for a day or two says: Now I’m a single parent. Uh, no. Exceptions? Certainly, military spouses, where one parent sometimes must run the household solo while another parent is deployed for a year or longer. And families where a parent works with that civilian agency who has the most deploying of deployments: NASA.

“For All Mankind,” the Apple TV+ show now in its third season, focuses on this interstellar employer as well as the rival USSR space agency and, in the new season, a private Space X-like company sending ordinary citizens into space. For a price. The show got off to a slow start when it first launched, with dragging initial episodes that focused on dudes. Only and heavily on dudes. Dad dudes.

But a big part of the story has ended being quite the opposite; in the show, NASA welcomes female astronauts sooner than the space agency did in real life. “For All Mankind” offers an alternative history, representing a near past very like our own but slightly tweaked. One figure that remains consistent through the timelines? The dad. He’s lukewarm at parenting. His jokes are bad. He’s a million miles away. He’s space dad.

RELATED: With an Elon Musk-like villain, “For All Mankind” launches a new season into orbit

“For All Mankind” includes multiple dads in its cast, although they have come and gone, as some dads do, throughout the seasons. The first season’s dads include Mexican immigrant Octavio Rosales (Arturo Del Puerto) who, after the death of his wife, brings his family to America. There, Octavio works as a janitor for NASA’s Johnson Space Center and encourages his young daughter’s love of engineering. Because of his support, she grows up to work in a key role as NASA.

Octavio’s daughter, Aleida, is also supported — although passive aggressively— by Margo, the first woman in NASA’s Mission Control, inspired by the real one, Margaret Hamilton. Margo lives under the shadow of her own father figure, her mentor Wernher von Braun who, it turns out, worked for the Nazis. Her struggle to get out from von Braun’s influence, and his tarnished reputation, make up a good portion of her early storyline in the show.

But two dads cast the longest shadow over the dark side of moon in “For All Mankind”: astronauts Gordo and Ed. Gordo (Michael Dorman) is the odd heart of the show, completing that most difficult of character arcs: making the audience go from hating him and his philandering, drunken ways to loving him and his loving ones. Gordo is the redeemed dad, the one who wasn’t around for his kids (or his wife, Tracy) when the children were young and when it counted, but before it’s too late, he is there and present.

Gordo’s struggles are dad struggles, and the showcasing of his mental health feels like a rare honesty on TV.

The wake-up call for this space dad is his wife entering the NASA workforce, one of four women selected as astronauts. An angry, belligerent drunk, he struggles with the transition and his own feelings of inadequacy. He’s replaced on a mission by a woman. After finally spending serious time in space, he eventually comes home early due to dealing with mental illness in the confined quarters.

Gordo’s struggles are dad struggles, and the showcasing of his mental health feels like a rare honesty on TV. Gordo gains weight as he ages. Tracy, the woman he never stops loving, divorces him and remarries. And in another rare action: Gordo becomes a better dad to his two sons because of it (he’s around more, for one thing; he has to be). But he’s got a plan to get Tracy back.

Space dad Gordo ends up making the ultimate parental sacrifice (as does Tracy): giving up his life for the young astronauts on the NASA lunar outpost, to fix a coolant system and prevent a nuclear meltdown. He was dad to his co-workers, but his heroic actions left his own kids fatherless. 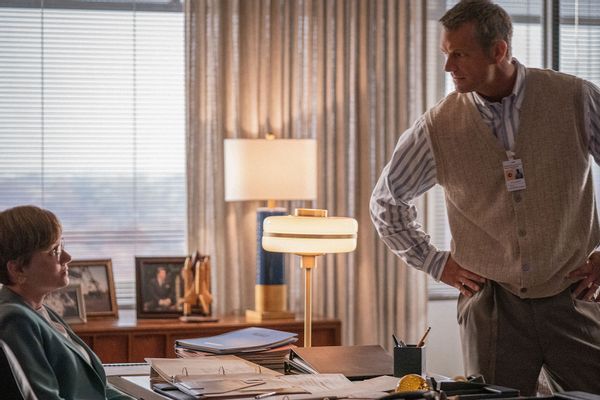 For All Mankind (Courtesy of Apple TV+)

Ed (Joel Kinnaman) is the other main space dad on the show, one of NASA’s leading astronauts, the all-American golden boy grown up (Kinnaman is actually Swedish). Ed is a typical, Tom Cruise hothead at the onset, giving a nasty interview to the media when cosmonauts reach the moon first before American astronauts.

But dads like Ed fall up. Ed is removed from his position due to speaking out of turn, only to be placed back in command shortly thereafter. The first season sees Ed, like his co-astronaut Gordo, drinking a lot, throwing darts at a tavern and ignoring the distress of his wife, Karen, a stay-at-home-mom to their son.

Ed isn’t a great dad for a long time. He yells at his son when he tries to teach him to ride a bike and the child, Shane, keeps falling off. He doesn’t understand why Shane can’t simply follow his instructions like a fighter pilot.

For space dad, his first reaction is rage, always.

For Ed is a space dad. He’s not around. Really not around. He’s millions of miles away. His stabs at fatherhood include perfunctory gestures like writing his son’s name on the surface on the moon, rather than being there for his child as a consistent and trustworthy figure.

An astronaut is not going to be there to raise his kid. Not this astronaut. Not this time. Shane starts acting out, getting in trouble, and Ed yells at him from space, over the staticky video phone. It turns out this will be their last conversation.

Grief reshapes everyone. For space dad, his first reaction is rage, always. He destroys things, then he turns to drinking. But then, and slowly, he changes.

For All Mankind (Courtesy of Apple TV+)In the second season, Ed and Karen adopt a daughter, Kelly. Born in Saigon, Kelly was a child refugee, part of Operation Babylift. Her plane crashes, but she is among those rescued. In this new season, we see how Ed has become a better father, possibly because he’s older, possibly because this is his second and last chance, or possibly because he and Kelly relate more. They’re a lot alike, maybe too much alike at times for Ed who resists, at first, his daughter’s desire to attend Annapolis, not wanting her to be a pilot, not wanting to lose her like he lost Shane.

Kelly becomes a scientist and at the start of Season 3, she’s the one on the video call, long-distance as she’s on a research trip, but this season will bring parent and child closer than ever before.

As a leader in space, and now an elder on his missions, Ed is a dad of sorts to others too, especially Gordo’s eldest son, Danny who is, unfortunately, terrible. Not even Ed’s mentoring will save him. Continuing the cycle, Danny is an awful father, absent and unfaithful. He’s so bad at parenthood, you forget he has a kid. (Likely, he does too.)

This season, after once again losing out to the ladies, Ed is picked to lead the mission to Mars run by Helios, NASA’s new private sector competition . . . which just happens to be co-founded by his now ex-wife, Karen.

Space dad has trouble staying married, but space dad stays friendly with his exes, maybe still holding a candle for them — and always holding out hope that this time he can be a better man, be a better father, be there where no man has gone before: home.

“For All Mankind” releases new episodes Fridays on Apple TV+.