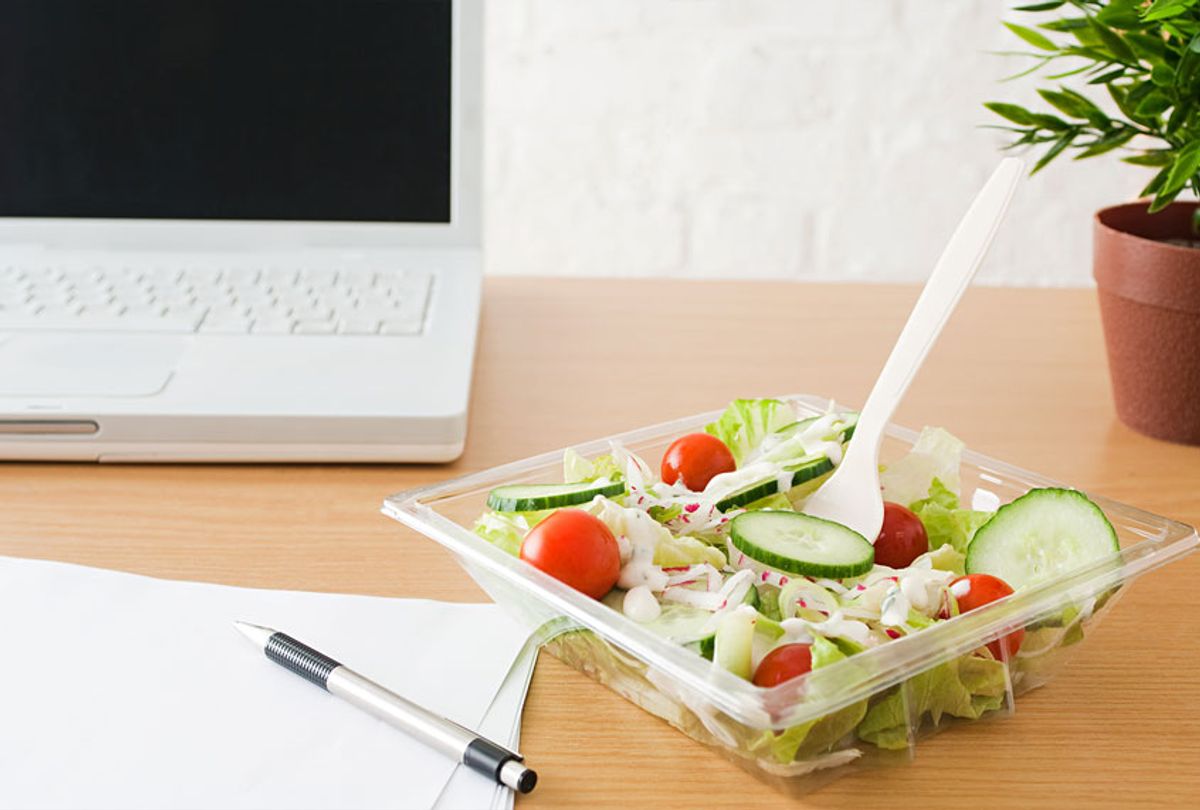 In the season two opener of the cult-favorite sketch comedy series, “I Think You Should Leave,” Tim Robinson plays Pat, an office worker who has just been informed of an unexpected midday meeting. “But it’s lunch,” Robinson says, loosening his grip on the hot dog in his hands.

“We pushed lunch to 1:30 so Dennis could make the flight back to Chicago,” his coworker responds with a sigh, before she heads down the hall. Pat thinks for a moment, before muttering to himself: “I don’t know if you’re allowed to do that.”

However, Pat does dutifully enter the board room for the meeting, walking with an oddly rigid cadence, one arm extended parallel to the floor. Once he sits down, it becomes apparent that he is concealing his hot dog in the sleeve of his blazer. He takes a pseudo-discreet bite under the guise of scratching his chin.

Related: The only thing my quarantine brain wants to watch right now is sketch comedy

Eventually, he holds his head in his hands for another bite, then places his head on the board room table for another. “Is that a hot dog?” a colleague hisses. Pat responds that he’s tired, “the most tired he’s ever been,” in fact.

“Pat, we know you’re eating a hot dog under there,” his boss finally chimes in, before Pat suddenly goes limp and silent. Someone reaches for Pat’s arm to ensure he’s okay, and Pat leaps from his chair — hot dog stuck between his throat and mouth. All his coworkers attempt to help him dislodge the hot dog, but Pat begins to flail like a rabid animal. They finally press him into a corner, all while Pat maintains a chokehold on some dude in a button down, and the hot dog is finally dislodged.

Pat looks at them with tears in his eyes, but instead of offering thanks or an apology, he delivers a single piece of wisdom.

That sketch became an instant internet-age classic, inspiring oil paintings, remote office protocol and visits to real-life hot dog stands. It’s one of those pieces of comedy that is bigger than the sum of its parts and, as such, pretty much lives rent-free in my brain. I think, aside from the feel-it-in-your-gut physical comedy, it’s because there is definitely something inherently ridiculous about office lunch.

I’ve been thinking about this a lot (an embarrassing amount, to be honest) as more and more people I know are returning to their jobs in actual office buildings, spending their days Slacking each other from behind the partial gray walls of their cubicles. We as a society toss people into this sterile, but emotionally supercharged environment — where deadlines, layoffs and budgets loom — and expect them to act normally, but it doesn’t always work out that way.

There are unspoken rules and petty office politics underpinning day-to-day interactions. As Tim Robinson so eloquently pointed out, everyone needs to eat lunch; often that’s when those simmering tensions begin to boil over, much like cafeteria lunch for the school-age set.

There are unspoken rules and petty office politics underpinning day-to-day interactions. As Tim Robinson so eloquently pointed out, everyone needs to eat lunch; often that’s when those simmering tensions begin to boil over, much like cafeteria lunch for the school-age set.

In part, that’s why the archives of business advice columns like Ask A Manager are packed with food-related questions. There are a number of memorable scandals, ranging from a manager who kept asking an employee to share food with her (and would get moody if the employee didn’t comply), the Keto-obsessed coworker who wouldn’t stop shaming the office snacks, and the woman who made NSFW noises while tasting the chocolate cake a coworker had baked.

Most of the questions, however, involve food getting stolen out of a communal office refrigerator. It’s such a bizarre violation. You’ve got food that someone has either made or purchased — and, let’s be real, has likely been looking forward to since packing it that morning — and someone in the office feels entitled enough to just reach into the refrigerator and take it. It inspires a singular kind of rage, as well as an obvious question: “What kind of person would do this thing?”

It’s a seemingly perennial issue. In 1998, the “Friends” episode “The One With Ross’ Sandwich” first aired. In it, Ross is unraveling in the face of his pending divorce and recent eviction. “The only good thing going on in [his] life,” is the Thanksgiving leftover sandwich he packed to eat at work. Inevitably, it is stolen, despite the fact that he left a note, which read: Knock-knock. Who’s there? Ross Geller’s lunch. Ross Geller’s lunch, who? Ross Geller’s lunch, please don’t take me. Okay?

A little over two decades later, Ask a Manager posts a question from a reader that could have easily been a scrapped plot from a sketch comedy series or sitcom.

“My food is always really, really spicy,” the advice-seeker wrote. “I just love it that way. Anyway, I was sitting at my desk when my coworker came running out, having a hard time breathing. He then ran into the bathroom and started being sick. Turns out he ate my clearly labeled lunch. (It also was in a cooler lunch box to keeps it cold from work to home, as it’s a long drive.) There was nothing different about my lunch that day. In fact, it was just the leftovers from my dinner the night before.”

Fast-forward a day and the individual’s boss asks if the advice-seeker had attempted to poison the coworker. Human Resources got involved. An in-office affair was revealed and the advice-seeker was eventually cleared — but not before being briefly terminated.

It’s one of those advice column write-ins where you question for a minute if the dilemma is actually based in truth. However, just a few weeks ago, I saw a viral Reddit post in which there was a photo of a water cooler. On the cooler was a note: “Hello Water Drinker, If you would like to enjoy this delicious POLAND SPRING WATER please see Sandra or Michelle to get signed up for the very cool WATER CLUB. This water ain’t free yo. Members are currently enjoying unlimited refills for $5 a month.”

Initially, I retweeted the photo thinking it was a joke until several folks I know — primarily academics and government workers — responded that their departments had implemented water clubs, too, since returning back to in-person work. It was one of those bizarre bits of office protocol that also feels like it could be spun into a sketch, but to which they were adjusting in real-time.

There are even full articles written about the etiquette of eating in an office environment, further proving the point that we as humans forget how to behave normally within the confines of the office kitchen.

There are even full articles written about the etiquette of eating in an office environment, further proving the point that we as humans forget how to behave normally within the confines of the office kitchen.

I’m partial to this piece by Alyse Whitney: “7 Office Microwave Etiquette Rules to Follow So Your Co-Workers Don’t Hate You.” The rules are pretty self-explanatory — don’t microwave brussels sprouts or seafood, use splatter protection, clean up after yourself — but I like the framing.

One of the things that I’m most curious to see play out is how, after over two years of many office workers shifting to at-home work, the return to communal lunch plays out. Publications ranging from the BBC to Scientific American have already established that people have almost forgotten how to be sociable; will there be new ways in which office politics rears its ugly head in the lunchroom? Or will it simply be more cases of stolen sandwiches and microwaved salmon? I suppose only time, and future editions of Ask a Manager, will tell.