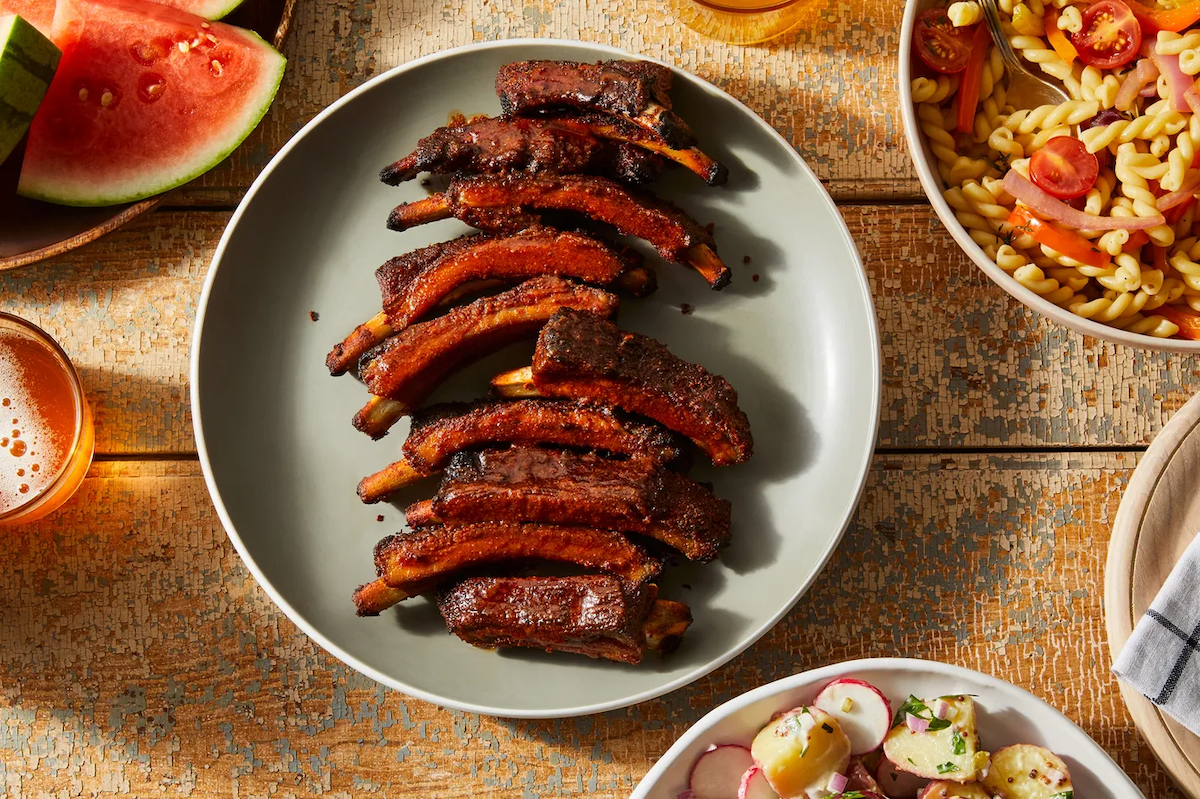 Ever since that Chili’s ad campaign debuted in the late 1980’s — you know the one I’m talking about, the one that worms its way into your head for days — baby back has been the rib of choice for many meat-loving Americans. This means that they can be hard to get at the market, especially during grilling season, and priced as such. The good news is that there is a tender market of ribs beyond baby back ribs that’s waiting to be devoured. You have options and all of them are just as delicious, even if they don’t have their own catchy theme song. Let’s break it down:

What are baby back ribs?

Baby back ribs lay over the pork loin, which is one of the most tender parts of the animal — when you eat a bone-in pork chop, that bone is a baby back. Their location on the animal is one of the reasons they are so highly regarded; compared to other muscles on the animal’s body, the loin doesn’t get much work, which means that the meat on your baby backs is very tender (it’s the same reason why filet mignon meat is prized for its tenderness; it comes from an easygoing part of the cow). It also means that they don’t need much fussing over before grilling, so you can keep their preparation as simple as you want — even a basic salt and pepper rub will do. The leanness of baby back ribs makes them less conducive to long, slow braises or smokes than our other rib choices, because they don’t have a layer of fat to protect them from drying out. For quick, easy grilling, they’re your best choice, but not your only choice.

Calling them “spare ribs” seems unfair — it makes you think that they are either unwanted leftovers or terribly lean, neither of which is true. Although they don’t come off of the prized loin section, spare ribs are meatier and more flavorful than baby backs. They lay over the belly of the pig and are usually removed before the belly is made into bacon. If these ribs are squared off on each side, they are referred to as “Saint Louis-style” ribs. They benefit from a salty rub or an acidic marinade that will help break down some of the tough muscle. Try bathing them in homemade barbecue sauce before grilling, or braising them in soy and rice vinegar marinade with a good dose of salt.

This cut come off of the pork shoulder. Country-style ribs aren’t cut the same way in all butcher shops: Some butchers will cut chops from the shoulder blade and call them country-style ribs, despite the fact that they don’t have any ribs on them. Otherwise, the rib rack that lays over the shoulder is removed and then sold as-is.

Country-style ribs are the meatiest and most flavorful of all the ribs, but they also have the most gristle and connective tissue. This means that, like spare ribs, they do well with an acidic marinade, which will help to tenderize the meat (the longer they can marinate, the better). They also benefit from a longer, slower cook, and work wonderfully when slow-cooked for pulled pork. So get yourself to the butcher! And hopefully in the meantime, that jingle will get out of your head.

Our best recipes for ribs

Transform two slabs of baby back ribs with a sweet and smoky rub made with brown sugar, sweet paprika, garlic powder, instant espresso powder, allspice, and chipotle powder. This recipe requires a little bit of advance prep — the ribs should marinate for about an hour before being roasted in the oven for upwards of three hours.

2. Baby Back Ribs with Dry Rub

Clearly, we love ribs. But here’s the thing — they take a while to come together. While they’re not hard to cook, per se, you need patience, grasshopper. Here’s a brilliant cooking tip from recipe developer Emma Laperruque: use two different oven temperatures and strategies: first, 300° and covered in foil, so they can steam, and second, 500° and uncovered, so they can get crispy.

When you can’t imagine turning on the oven, click on the slow-cooker for these succulent baby back ribs. A quick makeshift barbecue sauce is made with apple cider vinegar, ketchup, honey, and a few different ground spices.

It’s easy as 1-2-3 to memorize this five-ingredient recipe for ribs — all you need is 1 tablespoon dry sherry, 2 tablespoons dark soy sauce, 3 tablespoons cider vinegar, 4 tablespoons sugar, and 5 tablespoons water to make the glaze for even more flavorful spare ribs.

5. Grilled Ribs with Salt and Pepper

Keep it simple with nothing more than salt and freshly ground black pepper.