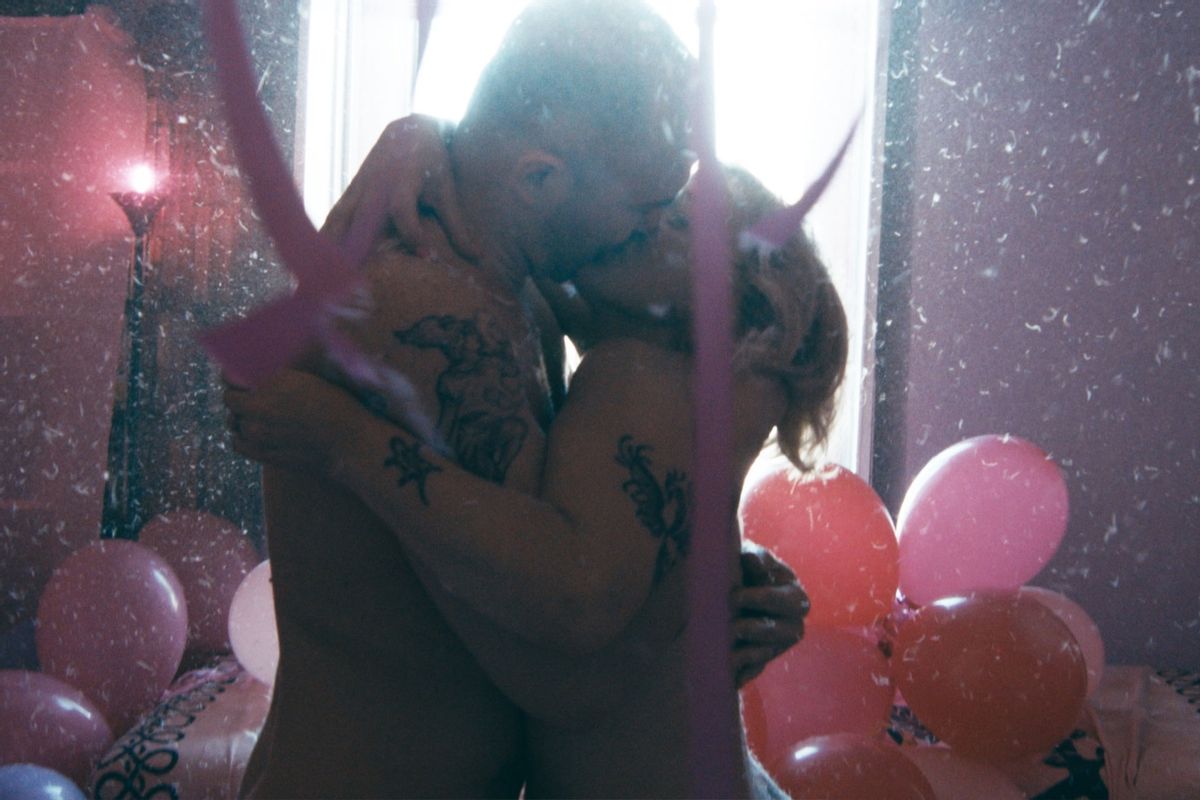 Before the opening credits of “Bloom Up: A Swinger Couple Story” are over, director Mauro Russo Rouge has fully immersed viewers in the polyamorous life of its married protagonists, Betta and Hermes. The tastefully filmed — and sexually graphic — scenes depict each partner in various throes of passion. The intimacy is more sensual than shocking, but it shows the pleasure this couple experiences sharing their sex lives with others.

“I wanted to tell a story about unconditional love — love no matter what.”

However, “Bloom Up” is neither endorsing nor objecting to swinging; it is simply trying to normalize this behavior that many think is “perverted.” Rouge does this by letting viewers judge polyamory for themselves. Betta and Hermes are very likable, sharing some very candid, romantic and ordinary moments together when they are not swinging. And, at the end of the film, the seemingly insatiable couple discuss how opening their marriage impacted their relationship.

Rouge spoke to Salon, with the assistance of the film’s sound editor Paolo Armao, who interpreted, about the film and polyamory.

Did you find out about Betta and Hermes first, and decide to make a film about swingers, or did you come up with the idea and then meet the couple? Why does this topic interest you?

I had an idea about shooting a documentary on swingers and I started looking for swingers on a swingers’ website. I reached out to various couples to find the perfect match for my message. The topic is interesting to me because I wanted to tell a story about unconditional love — love no matter what.

There are many sex scenes, and some are a bit explicit, but your focus is less on the audience’s pleasure and more on the couple’s, which I appreciated. Given that you were the cinematographer for the documentary, can you talk about filming the sexual scenes and what you wanted to show?  I found the casual nudity of the couple getting dressed far more intimate than the sex scenes.

It’s a film that is more about love than sex, because that’s what I was looking for. In my research, I was looking for a couple that [felt] something special about love. We see and get that watching the film. They accept experimenting with their bodies and their emotions. They really opened themselves up to it. You can see it’s very honest and sincere; it’s the way they are. Shooting the sex scenes was important, and it is explicit, but I am not showing clear scenes of penetration. What came out of shooting is the relationship that was created between me and the two protagonists. The balloon sequence in the film illustrates their essence of love. I didn’t want to be too explicit about that, but it conveys the “motion” of their love.

Regarding shooting the sex scenes, it was very easy to shoot them because the couple was open and had no restrictions. I was able to go wherever they were. There were some restrictions imposed by other couples who are in some shots, but they are not clearly seen. The swingers’ world, they wear masks in some situations. The sex scenes are very romantic for me. They are elusive in some ways. It is not about showing the sex; it is to make you feel the couple’s passion.

I’m curious about this because I like that your film shows Betta and Hermes enjoying sex, and it appears they did like being filmed/watched. Why are we all such voyeurs? Your film isn’t judgmental.

One of the best scenes has Betta, blindfolded, having sex with a single male partner, while her husband Hermes also pleasures her. She is unable to distinguish who is doing what to her, although she figures some of it out. That is exciting for her, and interesting to watch. Betta says it was “proof of love,” but to me, it was about consent. Can you talk about this idea, or the “rules” of polyamory and how couples negotiate what they do? It’s hinted at in the film.

“I am not polyamorous, but I believe nothing is forever, and nothing is sure. Polyamory is a great opportunity to listen to feelings . . . What we can learn from being polyamorous is that you have the right to have sex with other people.”

It’s not easy to deconstruct the rules they have. They are not written anywhere. Different couples have different rules. But these rules are absolutely necessary to keep the relationship intact. The idea is that they are a couple and are free to have sex with other people. How do you protect the relationship? You need some rules that always put the couple at the top of the hierarchy.

An episode that is not in the film — there was a night where the couple had a fight because Hermes went with another girl without signaling Betta first. He didn’t look for her nod of approval, so they fought. The same night, another couple had a fight for the same reason. Another girl went into a room with other couples without having her husband’s approval. The film leaves this question open — What are the rules? Do we care about rules? Are they important? If you are in a more “accepted” relationship with your partner, would you accept those rules?

On that same note, there are questions in the polyamorous community about singles being seen as a “sex object” only. There are concerns about having feelings, or not having a sense of detachment. What are your observations about this?

Singles play a very important role in the polyamorous world, as the film shows. A single guy can create a crisis in a polyamorous couple. You can see the power a single man can have — there is a political importance; singles know how to behave. It’s easier to find single women than men — at least in northern Italy. And that is why [couples] have so many important rules, and need approval, and have these codes of behavior. It is very easy to break this fundamental rule, and if you do that, you are going to break the essence of being polyamorous.

Likewise, there is a brief discussion of fear and bisexuality. It appeared that many of the women in the scene engage in same-sex practices, but the men do not. Do you think this is a double standard?

Of course, there are couples where both members are bisexual, but that wasn’t the case when I was filming. I had a set number of nights to spend with Hermes and Betta’s group. I know there are some [polyamorous] people are bisexual, but I am not sure that Hermes is bisexual.

Do you think Europeans are more open-minded towards swinging than other countries?

We can answer yes if we talk about northern Europe and central Europe. The importance of an Italian film like this is because in Mediterranean countries like Italy, Spain, Portugal, and Greece, the church, and being Catholic, is so much at the root of our culture. It is hard for people to evolve and be who they are, sexually speaking.

My team and I spent months to resolve an issue about this film being censored in Italy. There are several degrees of censorship, and this film received the maximum restriction. That is likely related to the topic. They had three revisions with a court that had to judge the film. They stopped the film and said, “If you want to show this film on private TV, you need to cut 20-25 minutes —all the sex scenes.” But we have to think about how this film relates to all the violence we see in other films. How can this film be judged more violent and dangerous compared to films where we see physical violence? It is a big topic here in Italy. Even if in the past three to five years we have had freedom to feel and express our sexual needs, but we are some years behind northern Europe, the U.S., and the UK.

You present the couple’s ideas about polyamory — “it’s a fantasy” — in the film. What do you think about the fantasy element of polyamory?

I am not polyamorous, but I believe nothing is forever, and nothing is sure. Polyamory is a great opportunity to listen to feelings, sensations, and emotions, and what we can learn from being polyamorous is that you have the right to have sex with other people. We need to give voice to that and what I find interesting, and what I like that I learned from the polyamorous people is that they listen to their needs. They feel a need to celebrate their essence. Being polyamorous now, they don’t feel a need to wear a mask or feel shame. They are happy to represent who they are.

“Bloom Up: A Couple Swingers Story” is currently in theaters. Watch a trailer, via YouTube.