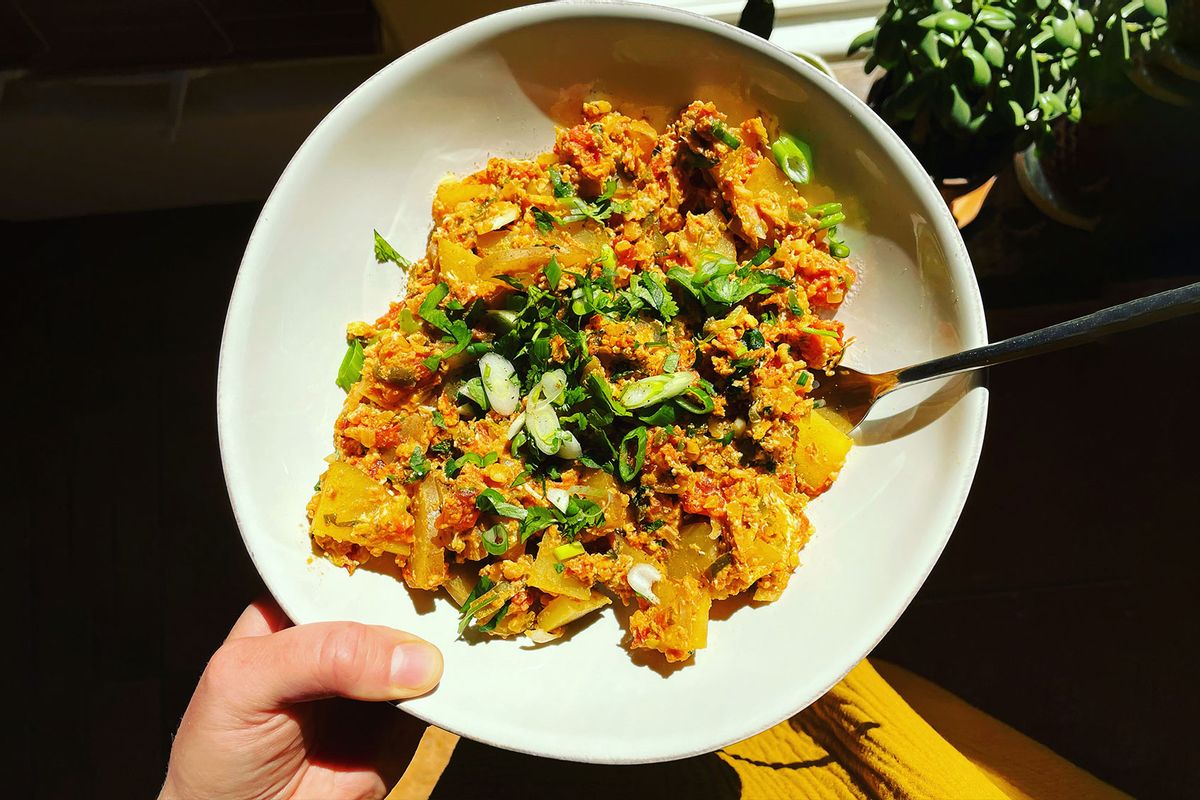 In the decade I’ve been working from home — mostly as a full-time freelance writer — I’ve made plenty of mildly self-destructive decisions. The non-exhaustive list includes being too lazy to create a separate work email address and working in non-ergonomic environments like at countertops and on the floor.

I have learned one crucial piece of work-from-home self care, however: I always set aside a whole hour to make and eat lunch. This decision arose out of a rather theatrical meltdown I will recount for you now.

Related: How to dig out of your next salad rut (plus, a panzanella recipe fit for a hearty lunch)

My background is in magazine editing and writing, but for a short spell I was a correspondent for a daily news site covering the packaged food and beverage industries. I wrote two articles a day, meaning I spent my morning doing a couple interviews, transcribing them and writing feverishly; then I’d break for “lunch” (aka shoveling alternating slabs of cheese, bread and tomato into my mouth) before repeating this insane ritual in the afternoon.

One day, I was waiting for a source to call me back when I thought I had just enough time to scramble up a couple eggs for a proper lunch. I’d barely whisked the eggs and minced a few chives when my phone rang. I knocked out the interview and posted the story, and was smugly strolling back to the kitchen thinking aloud, “I can have it all,” when I came upon a piteous sight.

The fridge door hung open, its incandescent light casting a sickening glow on six or seven chives that were strewn all over the kitchen rug next to half an egg shell, from which a string of egg white was forming a crust like dried-up drool. The counter situation was somehow sadder: a visual orgy of indecision. Four different-sized pans sat next to a flabby wad of softening goat cheese still in its plastic jacket. I’d pulled the entire loaf of bread out of the freezer (yes, I keep bread there — you should, too) to retrieve a single slice, which hung there half attached to the rest of the thawing loaf like a hangnail.

What’s worse, my initial thought upon entering the kitchen was, “Who did this?”

It was at that moment — eight months into a job that caused me more missed lunches and canker sores than I could count as I stared down my 30th birthday — that I realized it was time for a change. It’s been almost eight years since I started working for myself, and scarcely a day has gone by when I haven’t taken an hour to make and eat lunch.

Weekday lunch demands time, attention and strategic shopping, which gets easier as you learn what you crave midday. Because I cook and eat for a living, my weekday lunches are usually vegetarian or vegan, and often eggy: things like shakshuka, oven-baked sweet potato hash and 15-minute saag paneer with halloumi and clean-out-the-fridge greens. I almost always have a salad, either as a side — think cabbage and mint slaw — or the main event. Go-tos include lemony tuna salad with white beans, panzanella with pickled pepper dressing, or seared cucumber and couscous tossed in my favorite tahini dressing (recipe below; you’re welcome). I’ve found that it helps to always have lots of fresh herbs and nuts around; that way I can mash together a quick herb sauce right on the cutting board with a garlic clove, olive oil and citrus juice — and my sharpest knife. From there, I’ll smear it on a sandwich, or toss it with roasted vegetables.

Of course, there are plenty of days in which the prospect of preparing a midday meal feels insurmountable enough to order sandwiches or eat leftovers. But since I’ve embraced this almost-daily ritual, I find myself fantasizing about what I’ll make for that day’s midday meal while I’m still eating breakfast. When I’m between calls or struggling to come up with a good headline, I’ll make a mental inventory of my fridge contents and start putting the lunch-puzzle pieces together. Once 11 rolls around, I’ll sneak away from my laptop to get some farro going or wash and dry lettuce. I’ve also been known to appear a minute or two late to an interview after lunch because I was griddling a ham, cheddar and kimchi sandwich. (In my defense, you cannot rush a griddled sandwich.)

In other words, I’ve slowly taken back a slice of my day that for far too long belonged to work for no other reason than I let it. I even start my workdays a little earlier than I used to, if only to eke out time for my glorious midday break.

Now I realize that homemade weekday lunch is not a possibility for everyone for a whole litany of reasons. But the great thing about it is this idea translates. For instance, do you brew a perfect cup of coffee or tea? Can you whip up a mean batch of blueberry jam, granola or pan bread? Whatever your thing, the essence of this ritual is to carve out time for yourself every day to recharge with a little self-loving activity that puts you square in the present moment. It’s meditation for the meditation-averse.

That’s why cooking works so beautifully. You have to eat anyway; plus, it’s pretty hard to successfully half-ass it. I should know, I once covered my entire kitchen in dried-up raw egg, chives and shame.

If all you have are regular cucumbers, peel them till they’re striped, and scoop out the seeds and gunk before chopping them.

More by this author: