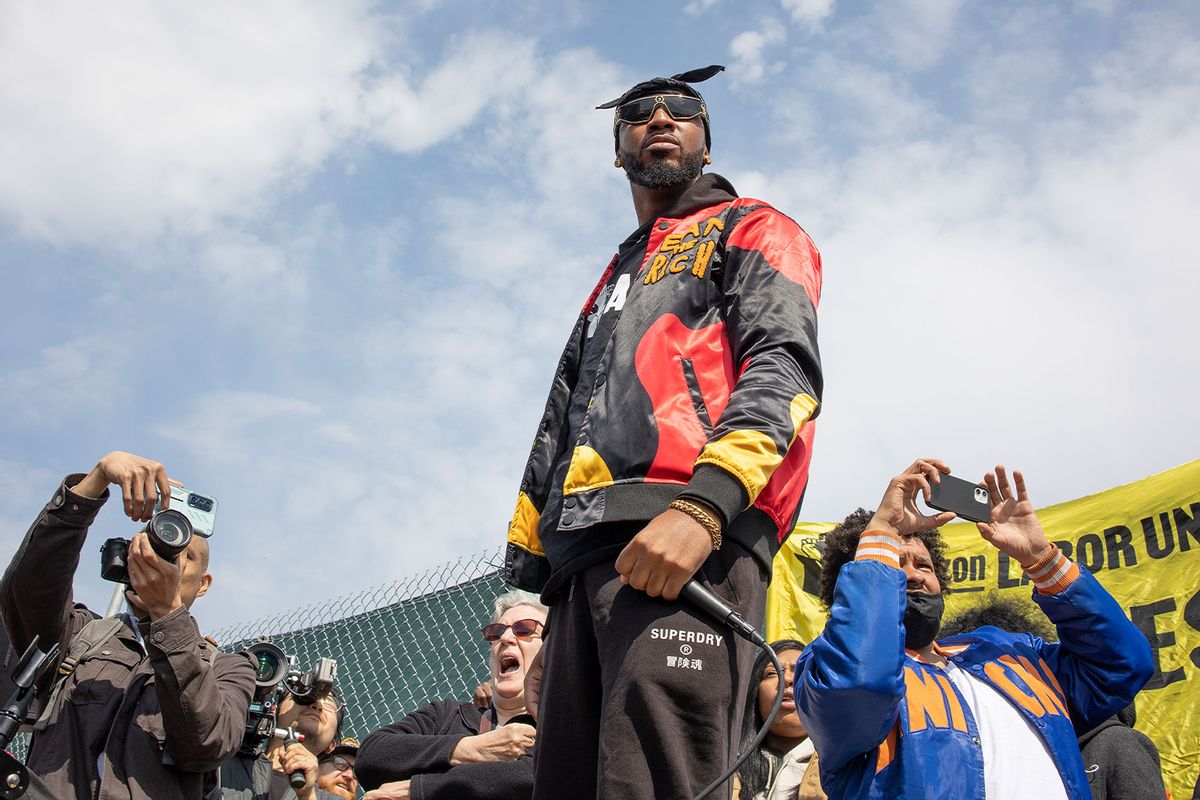 Organizers for the independent Amazon Labor Union, which stunned the world when it won a union election to represent several thousand workers at the corporate behemoth’s facility in Staten Island, New York, are now waging a wider battle against Amazon’s labor practices.

The union lost a May 2 vote at a smaller Staten Island facility that primarily relies on part-time workers, but says it is reviewing its legal options amid reports that Amazon may have tried to intimidate workers. In a potentially far more significant development, a coalition of the nation’s largest public pension funds, with billions of dollars in Amazon stock, is urging shareholders to take the battle to Amazon’s corporate suite.

ALU lost the vote at the secondary Amazon site on Staten Island, known as LDJ5, by 618 to 380, after prevailing a month earlier at the larger JFK8 facility, where 2,654 workers voted for the union and 2,131 voting against. Amazon is legally challenging the results of that first vote.

RELATED: Corporations like Amazon pay big bucks for “union avoidance” — and it all happens in the dark

As in the vote at Amazon’s facility in Bessemer, Alabama, where the company successfully bested the Retail, Wholesale and Department Store Union, ALU organizers have alleged that Amazon relies on illegal and coercive tactics to intimidate workers, including “captive audience” meetings during working hours, at which attendance is compulsory. Amazon has spent millions of dollars on these union-busting strategies.

“The organizing will continue at this facility and beyond. The fight has just begun,” ALU tweeted after the loss at LDJ5.

Meanwhile, the coalition of large public pension funds is urging shareholders to confront Amazon’s corporate leadership by voting out a pair of board directors who oversee Amazon’s workplace and compensation policies at the upcoming May 25 shareholder meeting.

The New York City Retirement System and New York State Common Retirement Fund hold 1.7 million shares of Amazon stock valued at approximately $5.3 billion. At an April 21 conference at the Harvard Club in Manhattan, several other elected state treasurers from around the country committed to joining in the effort.

Under Amazon’s current corporate board, said NYC Comptroller Brad Lander, “the pay ratio between the CEO and the median compensated employee is 6,474 to 1. That tells you where their human capital management priorities lie.”

At that forum, sponsored by the Open Society, For the Long Term — a nonprofit committed to sustainable investing — and the Center for American Progress, Lander told attendees that it wasn’t only Amazon’s human resources policies that were a risk to shareholders’ long-term value, but its skewed compensation system, which paid its top five executives approximately $400 million last year, including $212 million in in time-vested shares to CEO Andrew Jassy.

Under the watch of Amazon’s current corporate board, Lander said, “the pay ratio between the CEO and the median compensated employee is 6,474 to 1. That tells you where their human capital management priorities lie.”

He continued: “Amazon’s quota and other systems for mass-managing its workforce place extraordinary pressure on its workforce, resulting in higher-than-average injury rates and costly legal and regulatory scrutiny. Turnover rates remain as high as 150%, leading some Amazon executives to worry about running out of hirable employees.”

DiNapoli, the New York state comptroller, added a statement supporting the effort to replace Huttenlocher and McGrath on the Amazon board:

We have continuously seen significant concerns about how Amazon protects its workers health and safety, and upholds its own policies on human rights and freedom of association. Shareholders need effective, independent board oversight of the company’s policies and practices related to its workforce, but unfortunately, these two directors have repeatedly failed to provide it. It’s time for responsible and engaged directors to take their place on Amazon’s board.

Panelist Erica Smiley, executive director of the nonprofit Jobs with Justice, said that the Staten Island Amazon union vote was a watershed moment not dissimilar from the “sea change” of 1864, when half a million African-Americans walked off Southern plantations in the wake of the Emancipation Proclamation.

“When I hear people say the ‘Great Resignation,’ I think what’s happening here in this moment in Amazon and many other places where people are simply walking out — they aren’t going to take it anymore,” Smiley said. “It’s not that they are leaving the workforce. They are looking for dignity and respect.”

Smalls, who was an Amazon supervisor when the COVID pandemic first hit in early 2020, told the audience he had become concerned about the lack of personnel protective equipment and social distancing at the sprawling Staten Island facility, which employs 5,000 people. Amazon fired Smalls as his organizing bid for the independent ALU was gaining traction.

“I said, ‘If you don’t do anything blood is going to be on your hands,’ and it was because people have died in that facility from COVID-19,” Smalls said. “That is just heartbreaking because that’s what I was trying to avoid and it happened and then I was fired for trying to speak out on a policy that none of us received.”

In February of 2021, New York Attorney General Letitia James sued Amazon for failing to protect Amazon workers during the COVID pandemic. “While Amazon and its CEO made billions during this crisis, hardworking employees were forced to endure unsafe conditions and were retaliated against for rightfully voicing these concerns,” James said in a statement. “Since the pandemic began, it is clear that Amazon has valued profit over people and has failed to ensure the safety and health of its workers. The workers who have powered this country and kept it going during the pandemic are the workers who continue to be treated the worst.”

Amazon has consistently maintained that it has done everything possible to keep its workforce safe during the pandemic.

“The Amazon Labor Union is doing something remarkable and significant,” said Lander, the New York City comptroller, in a phone interview last week. “Their victory at JFK8 shocked the whole world.” The more recent defeat at the second Staten Island facility, he said, “reminds us that a powerful company, one of the very most powerful companies in the world, has a lot of union-busting tools at their disposal and some of them violate U.S. labor law.

According to the organizers of the Harvard Club pension fund event, the officials in attendance were collectively responsible for managing $2 trillion in investments. In an era when Congress and the White House are still under the sway of corporate money, activists claim, taking the battle directly to Wall Street is essential. Amazon’s enormous financial influence in the media, higher education and philanthropy may lend it considerable moral legitimacy among America’s liberal elites.

Amazon founder Jeff Bezos recently bestowed $100 million each on liberal commentator and activist Van Jones and humanitarian chef José Andres, which observers have suggested helped deflect criticism of Bezos’ vanity space flight. “We need unifiers and not vilifiers,” Bezos proclaimed at the time. “We need people who argue hard and act hard for what they believe. But they do that always with civility and never ad hominem attacks. Unfortunately, we live in a world where this is too often the case. But we do have role models.”

Investigative economist and attorney James Henry, a global justice fellow at Yale University and a senior fellow at Columbia University’s Center for Sustainable Investment, said that along with supporting the grassroots organizing efforts of the Amazon Labor Union, stockholders should hold Amazon’s corporate directors accountable for the company’s behavior.

As Henry observed, that group of business-world superstars also  serve on the boards of several of the nation’s most respected museums and philanthropies, some of them committed to addressing exactly the kinds of disparities the current leadership of Amazon is accused of worsening.

“The corporation is one of the most insidious organizations ever devised, because it encourages the desensitization of peoples’ consciences.”

“We have come to accept the notion that people can have one behavior in their private lives and a wholly different behavior in the corporate world,” Henry said. “The corporation is one of the most insidious organizations devised because it encourages this kind of desensitization of peoples’ consciences. This phenomenon was described by sociologist C. Wright Mills as the ‘higher immorality of the corporate organization,’ because once you get inside these organizations there’s a pressure to conform and serve the corporation beyond your own values.”

In a recent op-ed for the Harvard Law Record, Henry defined the “higher immorality” described by Mills as “the propensity of large-scale organizations to undermine individual ethics and responsibility with an impersonal corporate code that undermines personal responsibility.”

Henry described Amazon board member Jamie Gorelick, who served at the Justice Department under Bill Clinton, as “a great example” of this tendency. “I know her well — we were classmates at Harvard,” he said. “She had a distinguished career at the Justice Department under [Attorney General] Janet Reno. She’s a Democrat with a big D — a gigantic corporate D — and she’s been on Amazon’s board since 2012. She is a remarkably decent person. I am sure Jamie doesn’t support breaking unions in Alabama or New York or the grotesque levels of tax-dodging Amazon has engaged in by shifting income abroad.”

The Institute on Taxation and Economic Policy recently reported that Amazon “avoided” about $5.2 billion in corporate federal income taxes in 2021 while reporting record profits of more than $35 billion (75% higher than its 2020 record haul) and “paid just 6 percent of those profits in federal corporate income taxes.” According to the nonprofit, if “Amazon had no tax breaks, it would have paid 21 percent of its profits in corporate income taxes, or more than $7.3 billion. Instead, it paid $2.1 billion.”

“Shareholders have to address their questions very personally to these people serving on these boards,” Henry said. “How do they feel about these practices? Were they involved in these decisions? That’s what necessary to overcome the higher immorality that dominates the culture inside these boardrooms.”

Read more on the fight for labor rights at Amazon: