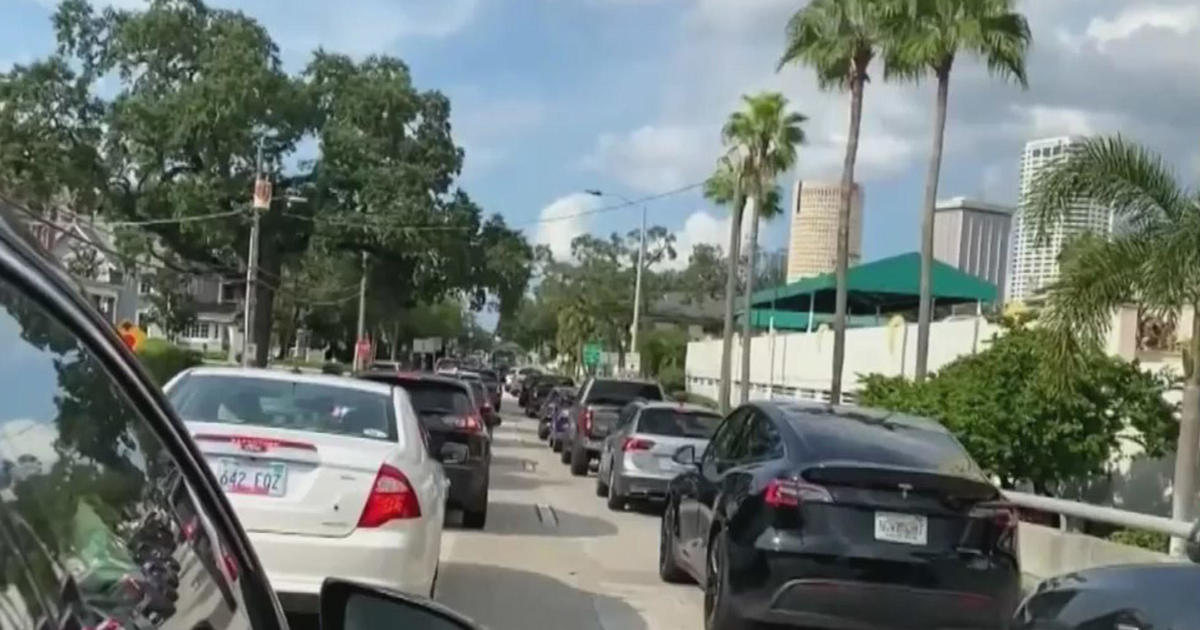 TAMPA – The Tampa Bay area is bracing for the brunt of Hurricane Ian.

A mandatory evacuation order was issued Monday for Tampa and the surrounding areas.

Many heeded the order, as bumper to bumper traffic filled the streets and highways as drivers sought safer ground.

One homeowner said she was evacuating to Atlanta and expects to come home to a flooded house.

“Definitely, absolutely. It floods in a big rain. So yeah, we’re going to take everything up off the ground, all the rugs. We’re anticipating coming home to a soaking wet house,” said Tessa Goss.

Some, however, have decided to ride out the storm.

“Floridians, you know, we wait this thing out and we are strong,” said Shaviere Joseph in Clearwater.

“There’s no other option and we have no where to go. Hopefully it’s not as bad and not too much flooding. I went yesterday and picked up some sandbags, we’re doing what we can to minimize the damage,” said Bassem Ammoury of Tampa.

“I never seen this before in 100 years, right over here in Tampa,” said Jose Carde.

People rushed to fill up on gas and clear out shelves at stores like Home Depot and Walmart. All of the sanbag sites have closed and shelter across the area are filling up.

Oceanside hotels are closing their doors and not allowing anyone to stay there for the next few days.

Tampa International Airport will be suspending operations at 5 p.m.

Tampa Electric said they will shut down power to the southern tip of the downtown Tampa area early Wednesday to help reduce restoration time.

The Tampa Bay Buccaneers announced Monday night that the football team was relocating football operations to the Miami area in preparation for next weekend’s game against the Kansas City Chiefs. The Buccaneers said the team will leave Tampa on Tuesday.

It’s been more than a century since a major storm like Hurricane Ian has struck the Tampa Bay area, which blossomed from a few hundred thousand people in 1921 to more than 3 million today.

Many of these people live in low-lying neighborhoods that are highly susceptible to storm surge and flooding they have rarely before experienced, which some experts say could be worsened by the effects of climate change.

The problem confronting the region is that storms approaching from the south, as Hurricane Ian is on track to do, bulldoze huge volumes of water up into shallow Tampa Bay and are likely to inundate homes and businesses. The adjacent Gulf of Mexico is also shallow.

“Strong persistent winds will push a lot of water into the bay and there’s nowhere for it to go, so it just builds up,” said Brian McNoldy, a senior research associate at the University of Miami’s Rosenstiel School of Marine, Atmospheric and Earth Science. “Tampa Bay is very surge-prone because of its orientation.”

The National Hurricane Center is predicting storm surge in Tampa Bay and surrounding waters of between 5 and 10 feet above normal tide conditions and rainfall of between 10 and 15 inches because of Hurricane Ian.

“That’s a lot of rain. That’s not going to drain out quickly,” said Cathie Perkins, emergency management director in Pinellas County, where St. Petersburg and Clearwater are located. “This is no joke. This is life-threatening storm surge.”

“Clearly, when you look at the Tampa Bay area, one of the reasons why we fear storms is because of the sensitivity of this area and the fragility of this area,” DeSantis said.

The last time Tampa Bay was hit by a major storm was Oct. 25, 1921. The hurricane had no official name but is known locally as the Tarpon Springs storm, for the seaside town famed for its sponge-diving docks and Greek heritage where it came ashore.

The storm surge from that hurricane, estimated at Category 3 with winds of up to 129 mph was pegged at 11 feet. At least eight people died and damage was estimated at $5 million at the time.

Now, the tourist-friendly region known for its sugar-sand beaches has grown by leaps and bounds, with homes and businesses along the water the ideal locations – most of the time. Hurricane Ian could threaten all of that development.

Just as an example, the city of Tampa had about 51,000 residents in 1920. Today, that number is almost 395,000. Many of the other cities in the region have experienced similar explosive growth.

A report from the Boston-based catastrophe modeling firm Karen Clark and Co. concluded in 2015 that Tampa Bay is the most vulnerable place in the U.S. to storm surge flooding from a hurricane and stands to lose $175 billion in damage. A World Bank study a few years before that placed Tampa as the seventh-most vulnerable city to major storms on the entire globe.

Yet for years storms seemed to bypass the region somewhat inexplicably. Phil Klotzbach, research scientist in the Department of Atmospheric Science at Colorado State University, noted that only one of five hurricanes at Category 3 strength or higher has struck Tampa Bay since 1851.

“In general, cyclones moving over the Gulf of Mexico had a tendency of passing well north of Tampa,” the National Oceanographic and Atmospheric Administration said in report on the 1921 storm.

Also lurking in the waves and wind are the impacts of climate change and the higher sea levels scientists say it is causing.

“Due to global warming, global climate models predict hurricanes will likely cause more intense rainfall and have an increased coastal flood risk due to higher storm surge caused by rising seas,” Angela Colbert, a scientist at NASA’s Jet Propulsion Laboratory, wrote in a June report.

McNoldy, the University of Miami researcher, noted that Hurricane Andrew’s storm surge today would be 7 inches higher than it was when that storm pounded South Florida 30 years ago.

“As sea level rises, the same storm surge will be able to flood more areas because the baseline upon which it’s happening is higher,” McNoldy said.

Amid all the science, a local legend has it that blessings from Native Americans who once called the region home have largely protected it from major storms for centuries. Part of that legend is the many mounds built by the Tocobagan tribe in what is now Pinellas County that some believe are meant as guardians against invaders, including hurricanes.

Rui Farias, executive director of the St. Petersburg Museum of History, told the Tampa Bay Times after Hurricane Irma’s near miss in 2017 that many people still believe it.

“It’s almost like when a myth becomes history,” Farias said. “As time goes on, it comes true.”

It appears Hurricane Ian will give that legend a test in the coming days.

The CBS Miami team is a group of experienced journalists who bring you the content on CBSMiami.com.