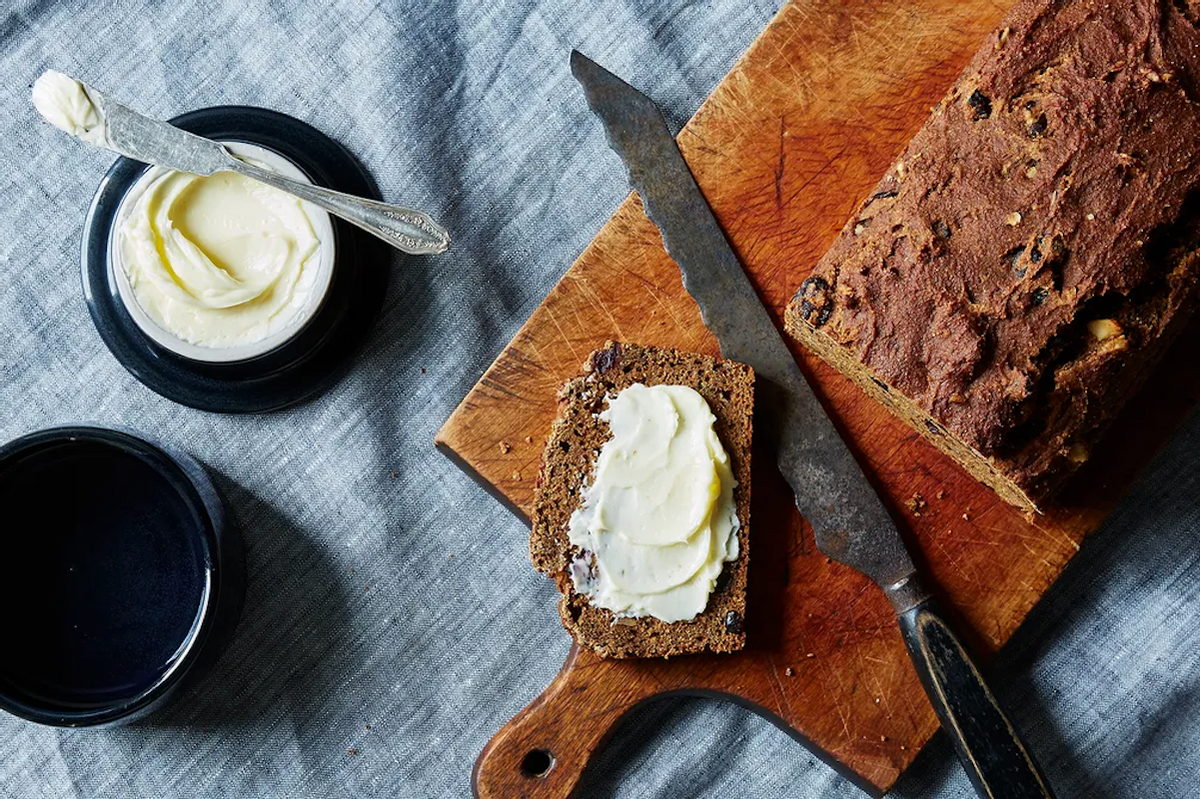 Our test kitchen goes through pounds and pounds (and pounds) of butter every week. Maybe it’s for sautéeing kale, mashing potatoes, or scrambling eggs. But, most often, it’s for baking.

I don’t need to tell you that unsalted butter is the default for baked goods, from chocolate chip cookies to pound cakes to pie crusts. Using unsalted butter allows you to control the amount of salt in your baked goods (especially since the salt content in salted butter varies, so it’s hard to know exactly how much you’re adding). The more nitty-gritty — and less talked about — distinction is American-style versus European-style.

In “On Food and Cooking,” Harold McGee defines the latter as “a cultured butter with a fat content higher than the standard 80%.” Depending on the brand, expect European butter to contain anywhere from 82 to 86%. In the United States, American-made butter must contain at least 80% fat. It may not sound like a huge difference, but just think of whole versus nonfat milk — a few percentage points makes a world of difference when it comes to flavor. Irish and European-style butter are beloved for being richer and creamier because they contain more milk and have a lower water content; this also means that they’re easier to bring to room temperature, which is ideal when you’re in a pinch and need softened butter stat.

Of course, baking a muffin is not drinking a glass of milk. Fat is flavor, yes, but it’s also one of the components in a fine-tuned formula. Safe to say that there are dozens of butter brands to pick from at the grocery store, but which one is the best for your recipe? It’s easy to think that swapping in higher-fat, European-style butter in any baking recipe would lead to more flavorful pie crusts, brown butter blondies, chocolate chip cookies, you name it. (And, as European-style butters have become more popular in the U.S., a lot of online resources have indicated as much.) But that sort of swap can unravel a recipe.

As award-winning baker Stella Parks noted a few years ago:

Friendly reminder: Switching to European style butter in an American recipe isn’t an upgrade, it’s a fundamental alteration of the formula.

But which American-style butter is the best to buy for baking? We did a taste test of five popular brands of butter to find out which is the best.

Here’s how the most popular brands of butter ranked from never again to the most delicious . . . Southern Living named Land O’ Lakes the butter of choice in its test kitchen, but the bulk of our taste testers respectfully disagreed. Most found it “not very buttery,” or “not so butter-forward” with a sad face drawn in for emphasis. Multiple people called it “bland.” Though, for what it’s worth, one lone wolf said: “This is #1.” Do with that what you will.

The Whole Foods store brand 365 ranked quite close to Land O’ Lakes. Several people described its flavor as “savory,” with one taste tester comparing it to “a butter and lard pie,” which, by the way, “is a compliment!” A couple people found the pie crust result to be “oily” — we can all agree this is not the goal of butter. Therefore, we’d probably pass on buying 365 butter in the future.

“Buttery but blah” sums up the wishy-washy feedback to Breakstone’s. Some complimented its “nice,” “yum,” and “light yet rich” flavor. Others said it was “less flavorful” and “reminds me of lard, but not in a way I’m mad at? I think.”

Cabot came in strong as one of the best butters for baking: “butteriest,” “very strong butter flavor,” “excellent flavor,” “can def taste the butter,” and “ooh nice flavor” were among its many compliments. Meanwhile, one taste tester declared that it “tastes like fish.” Perhaps this single low ranking is what helped the winner take home the gold . . .

“Whoa,” said one person. And the rest of the group agreed, describing Trader Joe’s store brand as: “extra buttery,” “sweet buttery flavor,” and “nice butter flavor,” with more than one declaring it “very rich.” We were also pretty pleased that the winner just so happened to be the cheapest of the bunch. And we were even more pleased that it came from one of our favorite grocery stores.