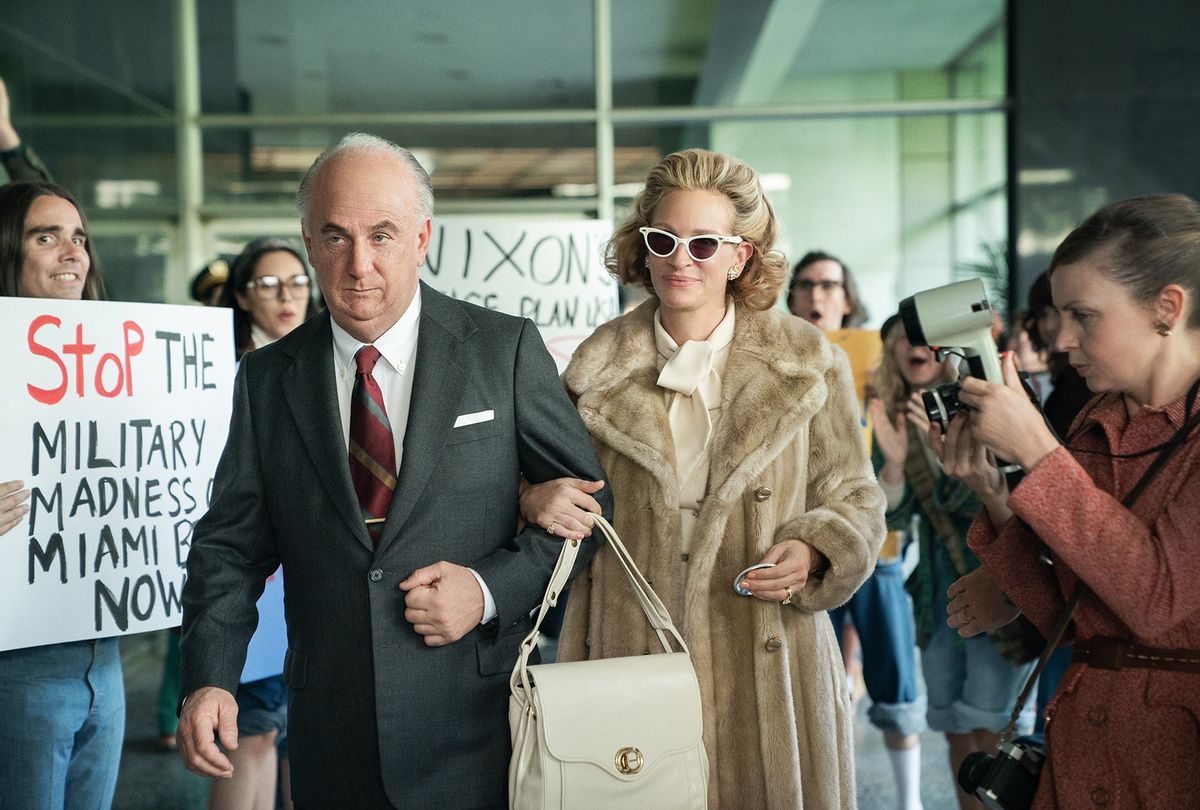 Starz’s new series “Gaslit” – created by Robbie Pickering and based on the first season of the “Slow Burn” podcast – starts out like an outtake from “Apocalypse Now.” A heavily mustached G. Gordon Liddy (Shea Whigham) lectures about masculinity while holding his hand over a burning flame until his skin sizzles. It’s a strange start, but Whigham sticks with the robust program, portraying Liddy like a violate Robert Bly, his antics over the top, cartoonish, even for Liddy.

Whigham is one of several cast members in “Gaslit” unrecognizable under facial hair or prosthetics. Sean Penn is another, extra chins and heavy black eyebrows adding years. His portrayal of John Mitchell stands out in the series, as does, of course, Julia Roberts as his wife, Martha. Deeply loving, deeply violent and always sparring, increasingly desperately, the two have a relationship that recalls another Martha, from “Who’s Afraid of Virginia Woolf?”

“Everyone’s so evil here; I’m having so much fun.”

But despite this pair, and despite the story’s continued, weird fascination with flames, “Gaslit” is a little dull, the light of its stars muddled under a huge cast and the heavy weight of history, which it reveals in uneven starts and stops. Over the course of the seven episodes given for review, it sparks the most when the minor characters are allowed to take the stage.

“Gaslit” focuses on the Watergate scandal, trailing its spotlight on characters in the saga including the earnest John Dean (Dan Stevens), White House Counsel for President Richard Nixon, and Dean’s future wife, flight attendant (and future writer) Maureen “Mo” Dean (a radiant Betty Gilpin, who gushes at a party: “Everyone’s so evil here; I’m having so much fun.”) along with CIA officer John McCord (Chris Bauer, so wonderfully empathetic in “For All Mankind” and equally great here). 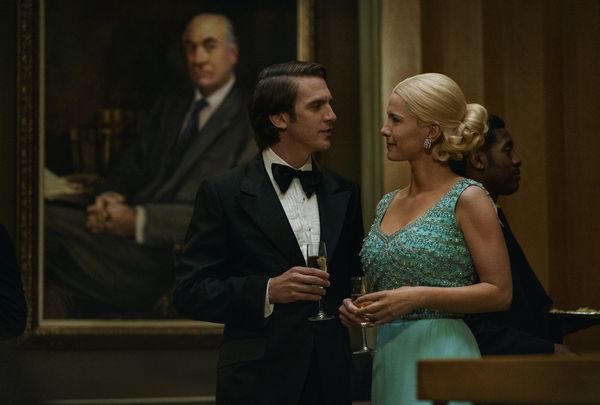 Dan Stevens and Betty Gilpin in “Gaslit” (Starz)And Martha. Wife of the United States Attorney General, Martha was an Arkansas-born, outspoken socialite who sounded the alarm on Nixon. In Roberts’ portrayal, she has charisma and vulnerability, a woman who could have done more with her life than be sparkling at parties and give exclusives to women’s magazines.

“Gaslit” is being billed as the Julia Roberts show, but it’s really an ensemble piece. And if you don’t have a firm grasp of history (the show doesn’t always either) it may be hard to keep the large, star-studded cast of characters straight and understand their importance.

“Jesus Christ wouldn’t make it through the Republican primary.”

Or, perhaps this history has been so well-trodden already, it makes sense to be drawn to the stories created from the sidelines: the new night guard at the Watergate (quietly compelling Patrick R. Walker), for example, or the sympathetic writer (Allison Tolman) who’s the only person Martha has to call for help. 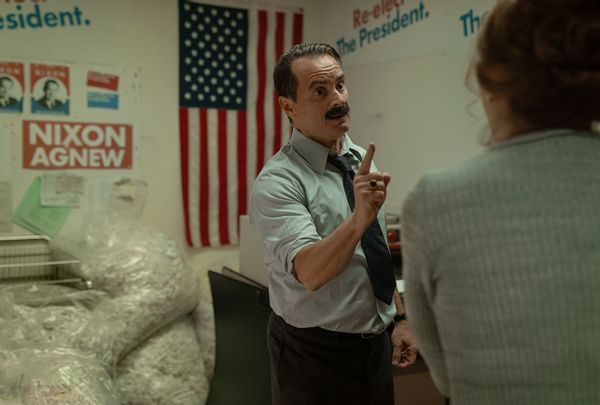 Shea Wigham in “Gaslit” (Starz)“Gaslit” sizzles with some hilarious lines, not all of them spoken by Martha, who does get zingers like: “Jesus Christ wouldn’t make it through the Republican primary.” We’re also treated to the quip: “The only thing that means dick to Dick is more glory for Dick.”

The show also looks really good. With golden brocades and rich navys, this is a swinging, stylish time. The swimming pools are shining and the floral wallpaper resplendent as Martha and John’s Bloody Mary-drinking 11-year-old (droll and bespectacled Darby Camp) chain smokes in her bedroom. It always seems to be sunny, muggy Washington D.C. cast in the same glimmering light as California. Vintage footage, real and invented, adds to the glamorous feel.

We get flashes of another kind of world, especially at the beginning. Trash swirls as Dean roars by in his troublesome Porsche, police fighting protestors on the street. An anti-war protester crashes a splashy benefit Martha attends and brings up the peace activists, the Berrigan brothers. “Looks like somebody needs to go back to finishing school,” the host says to laughs when the protester is escorted out.

But these are only flashes, hints of greater conflict (and perhaps, the story’s potential). There are many small moments here, racial microaggressions FBI agent Paul Magallanes (the likable Carlos Valdes) faces constantly, sexism all the women face: the bubbling cauldron of the time. It’s a lot beneath the surface. And a lot to try to balance.

“Gaslit” wants to be many things, which bogs it down, and it has marketed itself as whistleblower Martha’s story, which it isn’t, really. It’s a lot of stories. It’s a time capsule, a not completely historically accurate one, but one stuffed full.

“Gaslit” premieres Sunday, April 24 on Starz. Watch a trailer for it below, via YouTube.