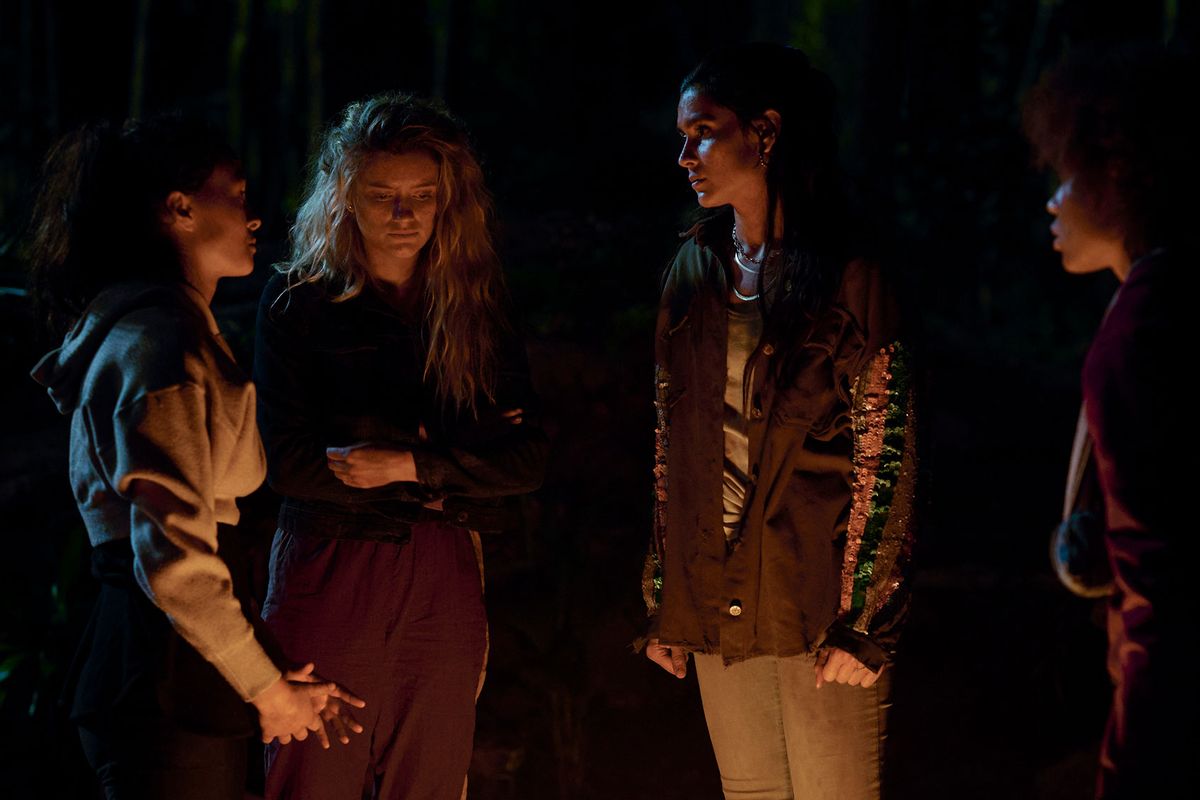 That collective buzzing you may have heard recently? It’s not hornets in your walls, but excitement that filming for Season 2 of “Yellowjackets” – Showtime’s breakout series about  high school girls who turn to cannibalism, and their adult selves living with that trauma, after their plane crashes in the wilderness – is expected to start this summer. The collective groan you could have also heard? That it will likely be November or December of 2022 before we actually see the show on our screens again.

What’s the Hive to do? A full year before Shauna, Jackie, Misty, Natalie and the rest of the soccer team graced us with their particular brand of WTF, Amazon Prime released “The Wilds.” The show created by Sarah Streicher and with showrunner Amy B. Harris has a surprisingly similar premise: teen girls must learn to survive when their plane crashes. But this plane crash-lands in the ocean, marooning a handful of girl survivors, few of whom knew each other before the accident, not in the about-to-be-freezing woods of Canada (or wherever “Yellowjackets” is supposed to be set) but on a desert island.

And things are not what they seem. Quickly we learn that among the girls there is a plant, an informant reporting to a kind of mad scientist who’s engineered the whole thing —yes, even a fake plane crash that accidentally really kills someone: Rachel Griffiths as Dr. Gretchen Klein. Gretchen has somehow convinced the girls’ parents, unbeknownst to the teens themselves, to allow their children to participate in a dicey experiment called The Dawn of Eve, meant to prove that girls would organize and lead a superior society.

That’s a secret the audience learns early on in Season 1, though it takes the girls, led by Leah (Sarah Pidgeon) time to figure it out. The first season of “The Wilds” ended on a cliffhanger, as Leah makes a discovery even more shocking than the fact her parents agreed to put her on a fake “Survivor”: There’s a control group of boys.

RELATED: “Yellowjackets” unapologetically follows YA logic, from the Big Dance to bitter betrayals

It’s no “who the **** is Lottie Matthews?” but it was a jarring reveal, so much so that it was hard to wait for “The Wilds” to return. That’s why it’s a disappointment that Season 2 doesn’t have the same freshness as the first season. It’s not only that we’ve been to Wiskayok, New Jersey and back, but that we grew attached to and missed the girls from “The Wilds.” In the second season, they have to share the stage — or, rather the island — with a group of boys.

The second season seems to undo a lot of the good of the first and muddle its message.

Like the girls, the boys’ characters tend to fall into types. As we had the church girl in Season 1 (Mia Healey, who is half of a riveting romance), we have the abused boy with the heart of gold in Season 2 (Tanner Ray Rook). We have a jock (Charles Alexander), a bookish goth (Aidan Laprete), a nerd (Nicholas Coombe) and a smart and rather holier-than-thou gay activist (compelling Miles Gutierrez-Riley).

Never fear, the show hasn’t abandoned the girls completely — including the elite athlete (Reign Edwards), the bookish one (Helena Howard, who anchored the first season), the animal-loving peacemaker (the wonderful Jenna Clause) who is the show’s conscience — but it has to balance them with all the boys. A lot of boys. It doesn’t balance very well, and the second season seems to undo a lot of the good of the first and muddle its message.

Along with not really resolving the girls’ storylines in a satisfying way, the timeline is difficult to follow. The experiments with the girls and boys don’t run exactly parallel and the explanation given by the show adds to the confusion — it’s Day 42 for the girls and Day 15 for the boys. What?

Instead of Doomcoming, we have a surprise birthday party.

To the actors’ credit, the cast makes the best of it. It’s not easy introducing half a dozen new characters into an already-large ensemble. Some standouts include Alexander, who elevates his jock character Kirin with empathy and Rook who plays Bo like a master class in quiet suffering and old soul wisdom.

“The Wilds” is less intense and disturbing than “Yellowjackets” in most ways. The Daily Beast describes it as “the YA version of ‘Yellowjackets‘” and that seems apt. Intended for a young adult audience, the language is softer and so is the trauma, though this installment deals with a sexual assault that is shockingly graphic and upsetting (and as is the shrugging way Gretchen dismisses it). Instead of Doomcoming, we have a surprise birthday party, complete with decorations that just happened to wash ashore. Stakes feel low, though the teens are still in a struggle for their lives.

While “The Wilds” might be “kids survive a plane crash” lite, it’s actually more zany than “Yellowjackets.” If that’s your cup of herbal tea, you’ve struck gold. We have Ben Folds playing himself in an extended hallucination, a man-eating jaguar, not to mention the ridiculous The Dawn of Eve experiment, which is flimsy to begin with — what exactly is the experiment and what parent on earth would agree to it, let alone who would give Gretchen funding or work for her?

A lot of disbelief must be suspended here. Unlike “Yellowjackets” perhaps, you won’t have grisly nightmares after watching the new season of “The Wilds.” But you might be too puzzled to sleep.

“The Wilds” Season 2 is now streaming along with the first season on Prime Video. Watch a trailer for it below, via YouTube.