It seems that any hope that legacy media had of recovering audiences was crushed by the recent and rapid collapse of CNN’s streaming service, CNN+.

For the past decade, viewers and listeners have gradually been abandoning legacy broadcast media, which refers to news media institutions established before the digital era, such as ABC, CBS, CNN, Fox News Channel, MSNBC, NPR and NBC.

Audiences have instead gravitated toward nascent media makers that got their start on platforms like YouTube, Substack, Spotify and TikTok. The popular programming on these platforms — which includes “Bad Faith,” “Breaking Points,” “The Katie Halper Show,” “The Joe Rogan Experience,” “The Jimmy Dore Show,” “Empire Files,” “Useful Idiots” and “The Realignment Podcast” — are collectively, and sometimes individually, drawing audiences as big as CNN’s primetime viewership.

Since the 2020 election, the slide in ratings for many of the large networks has been particularly acute. The legacy media’s coverage of the Trump presidency had successfully reversed a decade-long decline of their audience size. But following the inauguration of President Biden, ratings for cable news plummeted, with Fox News Channel, MSNBC and CNN losing 49%, 37% and 35% of their audience, respectively, between June 2020 and June 2021. CNN lost nearly 70% of viewers in the key demographic of 25- to 54-year-olds between January 2021 and May 2021.

RELATED: Can Fox News viewers be deprogrammed? Paying them to watch CNN makes them less gullible

But as a media scholar, I see these endeavors as exercises in futility, fueled in large part by a lack of self-awareness. In my view, legacy media’s shrinking audience size has more to do with their style of reporting and their misguided assumptions about what viewers want than the medium itself.

After nearly a year of hype, CNN launched its digital streaming service, CNN+, on March 29. The cable news juggernaut planned to spend $1 billion on the venture over four years. In addition to existing CNN personalities such as Kate Bolduan, Wolf Blitzer, Jake Tapper and Fareed Zakaria, CNN+ featured Chris Wallace, whom the network had poached from Fox News Channel.

The CNN+ project did not address polling that shows less than half of Americans trust legacy media, including CNN. In fact, a 2022 study found that Americans had more faith in the Weather Channel and BBC than the cable news networks.

Instead, on CNN+, the network offered audiences what amounted to a digitized version of many of the same personality-driven content that was on CNN, with new offerings such “Jake Tapper’s Book Club” and “Who’s Talking to Chris Wallace,” hosted by the former Fox News anchor.

It is no wonder that a few weeks into its launch — and after spending $300 million on the streaming service — only 10,000 of the 100,000 subscribers it had attracted were using the paid service daily. This made CNN’s one-year goal of 2 million users, and its four-year target of 18 million users, seem far-fetched.

Less than a month after the launch, the production and marketing budgets for CNN+ were reduced and CNN’s chief financial officer was laid off. Then, on April 21, it became official: CNN+ was suspending operations.

The appeal of new media

In announcing the shuttering of CNN+, the network said the service was “incompatible” with the plans of new management after WarnerMedia, CNN’s former parent company, had merged with Discovery in early April.

But as I see it, the crux of CNN’s problem is that the network failed to grasp that audiences are gravitating toward new media platforms precisely because they are not legacy media.

Some topics widely covered in new media — like corporate corruption and malfeasance — are barely mentioned on legacy networks like CNN.

Some stories that are widely covered on newer media outlets get barely a mention on legacy networks. Take Chevron’s surveillance and legal action against the human rights and environmentalist lawyer Steven Donziger, who, a decade earlier, had successfully won the largest judgment ever made against an oil company.

Often, when cable news covers corporate malfeasance — such as the collusion between Big Tech and the National Security Administration exposed by shistleblower Edward Snowden — it’s often discussed in short, trivial, slanted segments. Conversely, new media personalities such as Krystal Ball, Halper, Kyle Kulinski and Rogan have dedicated multiple hours of interviews to whistleblowers such as Snowden.

The success of new media platforms contradicts many of the assumptions that legacy media, including CNN, have operated under to justify their approach to covering the news. For decades, legacy media defenders have claimed that audiences have short attention spans and are too ignorant for complex ideas. In new media spaces, however, audiences seem eager to access programs that spend hours deconstructing a single topic.

I believe there has also been an overreliance on graphics, flashy set designs and big-name guests to attract and keep viewers. In reality, low-budget content from regular people have proved to be wildly popular. For example, Dore and his partner, Stefane Zamorano, host the wildly popular “Jimmy Dore Show” from their garage. 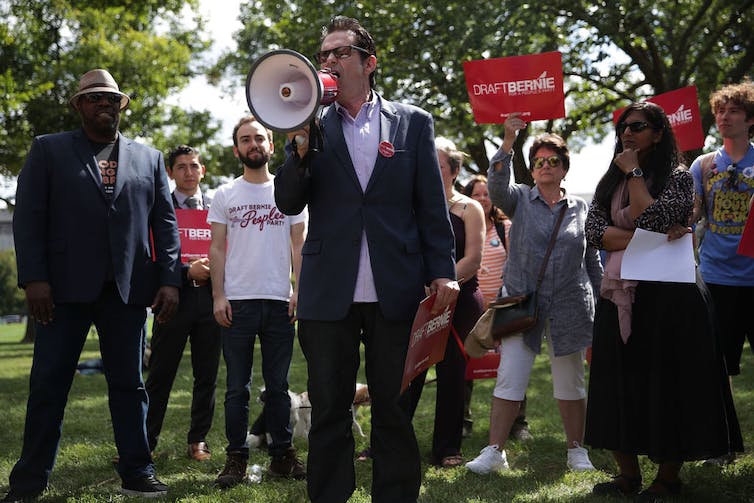 For decades, cable news outlets have become comfortable casting the majority of their stories as part of an eternal struggle between Republicans and Democrats. The repeated use of this frame not only misleads, but also unnecessarily divides audiences. Fox News is viewed as conservative, CNN is liberal, and viewers are expected to pick a side, swinging along with wherever their favored network lands on an issue.

But both networks are in the business of making money, and culture-war issues such as immigration, abortion and same-sex marriage have proved useful for attracting and dividing audiences.

New entrants don’t have this baggage, and seem more eager to rise above hackneyed partisanship.

Most new media consumers are sophisticated enough to recognize that legacy media do spread falsehoods. To be clear, there are a litany of falsehoods in new media and conservative corporate media.

For all CNN’s posturing that it is more trustworthy than Fox News, its unforced errors keep piling up: Hunter Biden’s laptop, Nicholas Sandmann and Russiagate, for starters.

But for all of CNN’s posturing that it is more trustworthy than networks like Fox News, its unforced errors keep piling up. In just the past five years, CNN incorrectly suggested that the Hunter Biden laptop story was either Russian or right-wing propaganda, settled a multimillion-dollar lawsuit over its reporting of an incident involving student Nicholas Sandmann and has been accused of spreading false stories about alleged Russian activities, including the hacking of a Vermont power plant, a bounty on U.S. soldiers and control over Donald Trump through compromising information.

Its credibility was further damaged in 2021 and 2022 when it was revealed that CNN head Jeff Zucker, and leading on-air host Chris Cuomo were advising Chris’ brother — then New York Gov. Andrew Cuomo — on how to respond to accusations of sexual harassment and political corruption. During that time, when the governor appeared on CNN, he did not face difficult questions about these alleged scandals. Instead, the siblings engaged in lighthearted teasing.

When it comes to expanding its audience, CNN has attempted everything short of transforming its content. CNN+ was simply CNN’s latest failed attempt to regain a sizable audience. To me, the evidence is pretty clear: If CNN wants to remain viable, it’s the content, not the medium, that needs to change.