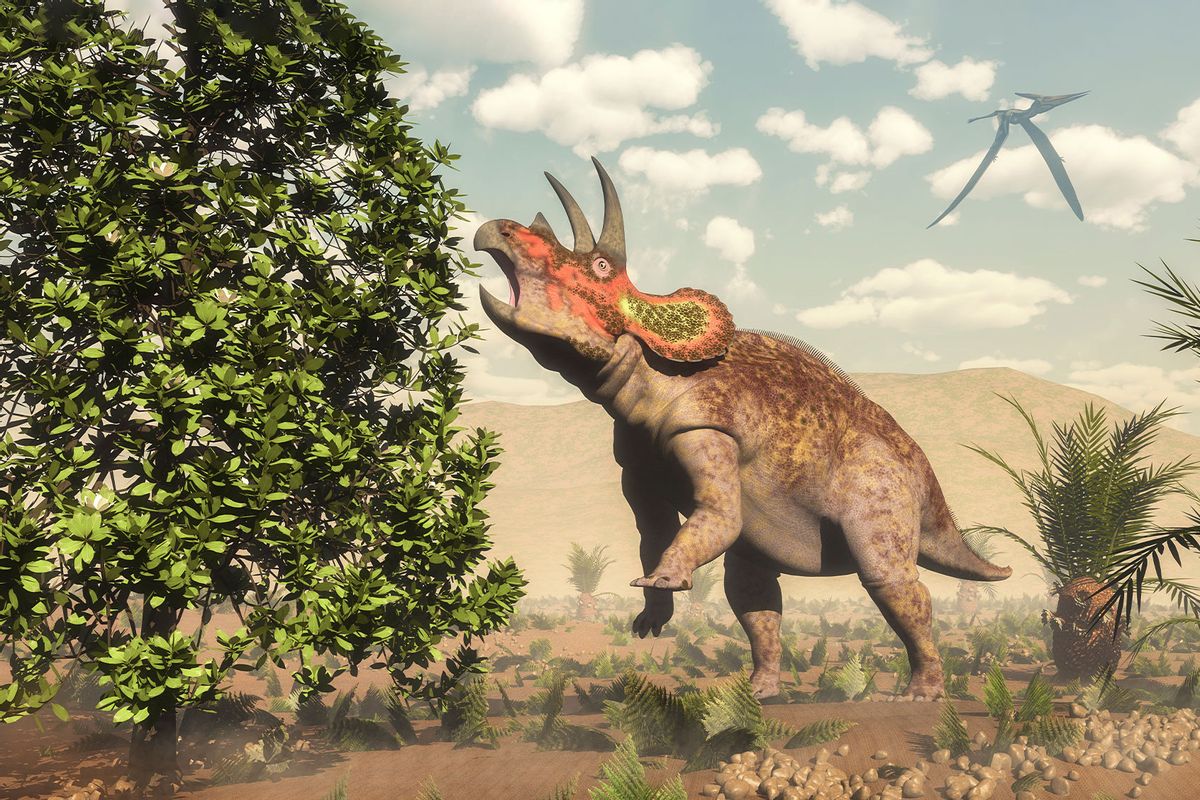 Sixty-six million years ago, an asteroid or comet struck Earth on what is now Mexico’s Yucatán Peninsula, resulting in the mass extinction of countless dinosaurs. This event, known as the Cretaceous–Palaeogene (K-Pg) extinction, did more than inspire Hollywood to create a blockbuster franchise about resurrecting the so-called “terrible lizards.” It fundamentally altered the course of evolution. Every type of life needed to find its own way — plants as well as animals.

This wasn’t as simple as it might seem. The balance of life on Earth was dramatically upset by the extinction event. Though many surface plants and trees died, their seeds did not, and soon after the extinction event the Earth was once again verdant. Yet the large land animals who fed on Earth’s plants and trees did not. It would take tens of millions of years before those evolutionary niches were filled again.

In the meantime, Earth’s plants and trees would have to manage things on their own, without any evolutionary pressure from large animals consuming them. This troubling period of time for Earth’s plant life is known as the “Palaeocene megaherbivore gap” — a term that refers to the evolutionary niche that suddenly disappeared, that of large herbivores who feasted on grasses and leaves, all of whom perished in the mass extinction event.

This is where a recent study, published in the journal Proceedings of the Royal Society B Biological Sciences, comes into play.

RELATED: Scientists just discovered a dinosaur so massive it is literally named “one who causes fear”

Researchers led by iDiv and Leipzig University were curious how plants evolved in the span of time without megaherbivores (or any herbivore that weighs more than 1000 kg such as brontosauruses), who vanished for 25 million years after the mass extinction.  Preivously, scientists knew very little about the paleobotany of the period between the last group of megaherbivores and their mammalian successors in the Late Eocene. With the advent of sophisticated genetic technology, however, that was no longer the case.

And the researchers were stunned by what they learned.

“It was thought that fruits during this time were generally small, and that dinosaurs with their large gape sizes (‘mouths’) were therefore unlikely dispersers of the fruits and seeds of flowering plants (‘angiosperms’, which originated during the age of the dinosaurs),” Dr. Renske Onstein, from the German Centre for Integrative Biodiversity Research (iDiv) and first author on the paper, told Salon by email.

The hypothesis regarding fruit size was just one of many scientists had about the relationship of animals and plants, and how they evolve together. On Earth today, there are many plants that have evolved to cater their fruit to specific animals that help spread their seeds; likewise, there are other plants that have evolved defenses, like thorns and toxins, to ward off hungry leaf-eaters. Yet in the absence of large herbivores, the selective pressure for these adaptations would disappear accordingly over thousands or millions of years.

Thus, researchers started by studying both fossilized palms and their living counterparts today, observing how these plants evolved as a result of the Palaeocene megaherbivore gap.

“We show that at least in palm trees, fruits were probably very large during this time, and they may have been so large because of the dinosaurs exerting evolutionary selective pressures on fruit size, so that they were big and contained enough nutrients for a dinosaur diet,” Onstein told Salon.

Onstein added that the scientists also learned that spines and other plant defense structures had probably existed in the palmy vegetation prior to the extinction event. This was perhaps to ward off dinosaurs from browsing their leaves. These defensive characteristics subsided immediately after the extinction event, however, and only returned when mammalian megaherbivores like mammoths appeared on the scene.

“We therefore challenge the previous assumption that dinosaurs and angiosperms did not really influence each other’s evolution and ecology, as was previously thought,” Onstein explained. The bottom line was that, as a result of the loss of megaherbivores, there was “a lower speciation rate, meaning the slower rise of new plant species. It also led to palms losing their spines. And it led to even further increases in fruit sizes.”

In addition to providing scientists with more information about the age of dinosaurs and its aftermath, the research has sobering implications for Earth today. Scientists have already confirmed that humans are causing mass extinctions at a rate not seen since the K-Pg extinction event. Climate change is one of the chief culprits, but it is not alone: Big game hunting often targets megaherbivores like elephants, and the destruction of natural habitats further pushes these species down the path toward extinction. As iDiv explained in its news release, “The ongoing extinction of large animals due to human hunting and climate change may thus also affect trait variation in plant communities and ecosystems today and in the foreseeable future.”

This is not to say that the entire process of learning about dinosaur extinction and plant evolution was a bleak one. When asked if the researchers ever had an “a ha” moment, Onstein talked about the moment when they learned that fruits became larger.

“This last result – that we found those fruits to become larger, was a bit of a ‘a ha’ result,” Onstein told Salon, adding that in retrospect this discovery actually made sense.

“Generally, it is well known from the fossil record that angiosperms started to evolve large, fleshy fruit during this time, and palms simply followed the same pattern,” Onstein told Salon. “These large fruits did probably not evolve in response to large dispersers after the dinosaur extinctions, but rather because of increasing warm climates and the expansion of tropical forests.”