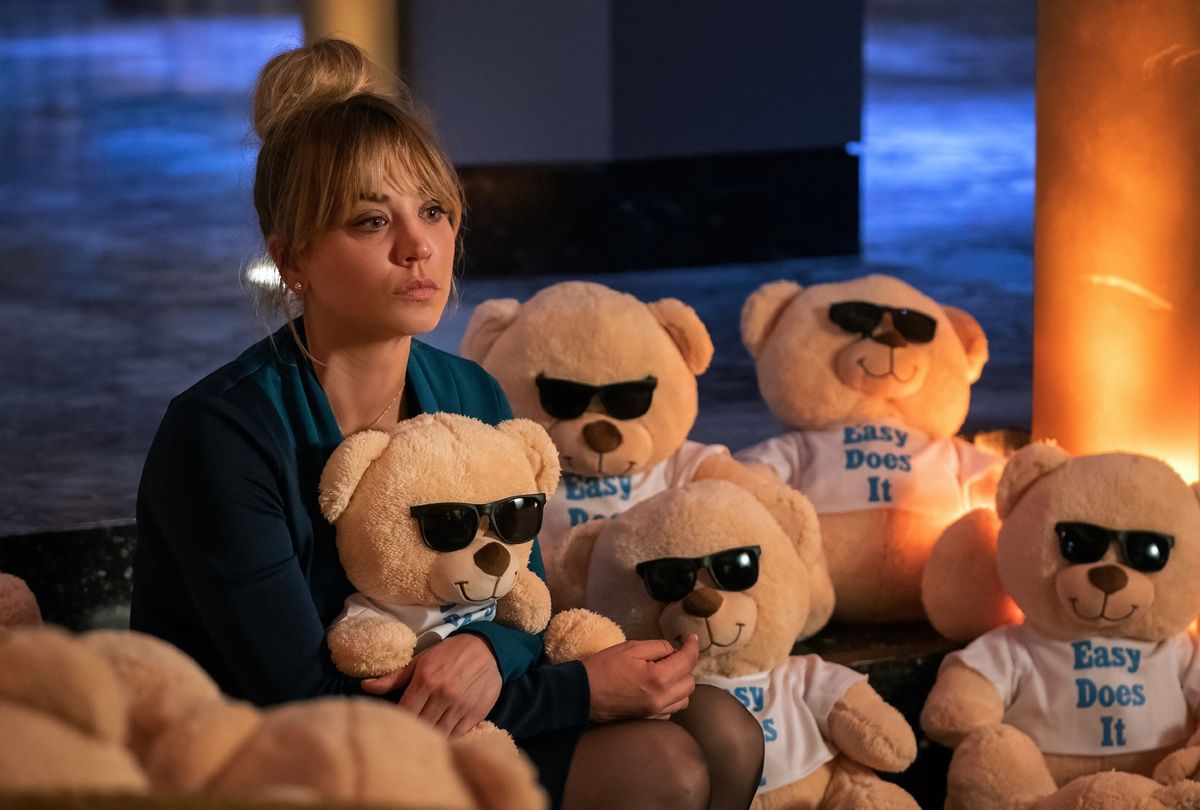 In episode five of “The Flight Attendant,” we get a front-row seat to the real status of Cassie’s (Kaley Cuoco) addiction, and how it’s absolutely no laughing matter.

From the very first episode of season one, right up to this episode, “Drowning Women,” the concept of Cassie knocking back vodka like it was her only source of sustenance was played for the punchline, but now, in a showcase of Cuoco’s dramatic acting skills, it’s all punch.

More “Requiem for a Dream” than anything we’ve seen from the show to date when Cassie falls off the wagon, and hard.

We start off with the usual “LOL, booze. What’s Cassie gotten herself into now?” trope, and then quickly plummet into a dark, hallucinatory take on a woman’s struggle with addiction that’s more “Requiem for a Dream” than anything we’ve seen from the show to date when Cassie falls off the wagon, and hard.

After a night of ill-advised sex with her handler Benjamin (Mo McRae) on his couch in the CIA  office, the first thing Cassie thinks is “At least I didn’t drink.” But later, we learn through a series of quickly spliced flashbacks that her so-called year of sobriety has been a lie.

After two big slips, one in which she nearly drowned in the tub of her New York apartment; a near-tragic event that’s been hinted at several times in the first episodes of season two; we see that Cassie’s choice to relocate to Los Angeles was in an effort to give herself a fresh start; sadly no longer so fresh.

Before leaving Benjamin’s office, Cassie sneaks a peek at her file on his desk and see’s that the person trying to steal her identity is doing a fantastic job of it. There’s a picture of her lost red glove next to dead bodies, and the results of a psych evaluation that she claims to not have taken that adds up to her very much being the sort of person capable of murder and espionage. She swears up and down, multiple times, and to multiple people, that she never took that test, but seeing as though her mind is creating rooms for various points of trauma in her life … maybe she did? Or maybe the milky eyed guy watching from the wings, who has access to her file, is behind all of this.

Back at home, where Annie (Zosia Mamet) and Max (Deniz Akdeniz) are doing their best to help her, shoving to the side the fact that this was supposed to be a visit and they’ve barely gotten a chance to hang out, Cassie tells them about what happened with Benjamin and then rushes off for a work thing. But before she can even get out the door she’s met with the upset scowl of Marco (Santiago Cabrera) the man whose affections she’s been ignoring, and who she’s about to lose when she blurts out that she slept with someone else.

This betrayal of Marco, along with a freakout at work during a group safety training session, builds to a meltdown that’s first directed at f**kin Carol (Alanna Ubach), and then at the bottom of a martini glass and several bottles of vodka as her poorly built walls of defense come crashing down.

Trying to catch her breath at the home of Grace (Mae Martin), who’s making herself a delicious looking martini, Cassie finds that she can no longer resist and accepts her invitation to have one as well. That leads to several, which then leads to her chugging out of a vodka bottle in the parking lot of a liquor store. Pause here to ask the table … what the hell is up with Grace?

Once completely wasted, she does what most wasted people find themselves wanting to do in this state, which is call and text everyone in their phone.

Once completely wasted, she does what most wasted people find themselves wanting to do in this state, which is call and text everyone in their phone. She calls Dot (Cheryl Hines), Benjamin’s boss in the CIA, over and over and over, screaming and cussing into endless voicemails that she’ll likely not remember until Dot reminds her of them the next day. Then she pivots to Shane (Griffin Matthews), fellow flight attendant and CIA friend, but when his boyfriend answers the phone she drunkenly divulges that Shane is in the CIA, jeopardizing not only their relationship, but Cassie’s friendship with one of the only people she could really open up to about every aspect of her life.

Beating herself up in a way that is difficult to watch, Cassie drives drunk to the beach with the “easy does it” teddy bear that her brother gifted her at the celebration for her one year of sobriety. Stumbling around and cussing at the sand, Cassie chucks the bear into the ocean and there’s a point where we wonder if she’ll follow it.

At her darkest moment, at least that we’ve been shown, help arrives in the form of her sponsor Brenda (Shohreh Aghdashloo) who’s been trying to reach Cassie all day to tell her that Megan (Rosie Perez) took off. Megan, as all this is happening, is off poisoning people with mushroom powder to steal back her lockbox containing info to barter with the South Korean government.

Everyone’s entrenched in their own dramas. each believing that their troubles are worse than everyone else’s. But right now the focus is on Cassie who, putting aside the fact that she’s in grave danger from whoever’s trying to frame her, has one day of sobriety, starting tomorrow.