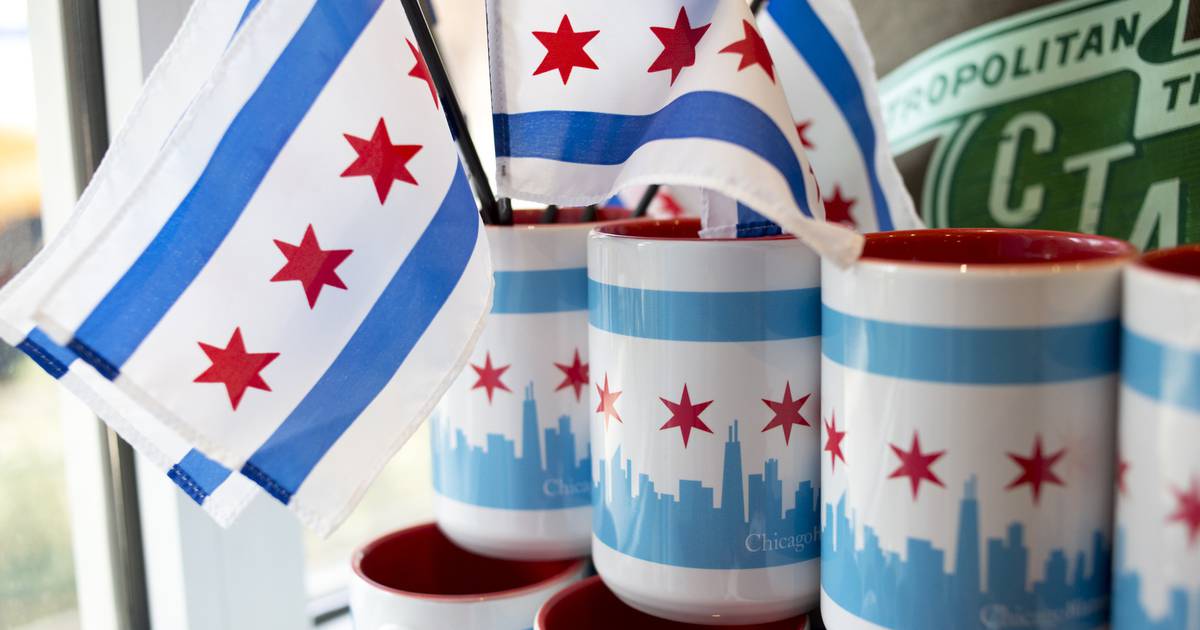 Every day in Chicago is Flag Day. Try walking a block on Michigan Avenue without spotting the city’s municipal colors in flag form.

Atop building entrances, on the right upper sleeves of police officers’ uniforms and on the bridge over the Chicago River, Chicago flags fly near their national and state counterparts.

Visitors scoop up the design on T-shirts and other souvenirs, while locals often have it tattooed on their bodies.

It might be hard to believe, but despite its popularity today, the Chicago flag was unrecognizable to the general public almost 60 years ago when the owner of a Portage Park hardware store displayed it. Some mistook it “for everything from the flag of Israel to that of one of the Scandinavian countries,” according to an Aug. 12, 1958, Tribune article.

How did this icon come to be? And what makes its design so popular and respected among flag enthusiasts (including the North American Vexillological Association, which says that next to the flag of Washington, D.C., it’s the best city flag in the U.S.) and laymen alike?

Let’s dissect the flag of Chicago by its colors — red, white and blue.

In 1892, with a little more than one month before the dedication of the World’s Columbia Exposition, organizers met with city leaders in a panicked effort to finalize decorations on both the exposition grounds and throughout the city.

Chicago had very little in terms of an official visual idenity — no official colors or iconography, let alone a flag — on which to lean. Published comments from the exposition’s supervisor for painting and sculpture, local mural artist Francis Davis Millet, addressed the issue:

“Almost all European cities have chosen colors, as the universities and colleges have done, and these are called the ‘Municipal Colors.’ Would it not be well now to see if the authorities of Chicago will not select a color or combination of colors as the ‘Municipal Colors’ for the city? If this is done, it will simplify the whole matter of civic decorations very much and afford a precedent which will, I am sure, be followed in all great cities of the Union.” — Millet

The Tribune embraced Millet’s “catchy” idea, announcing a contest on the next day’s front page for the best municipal color combinations. In 10 days, the Tribune received 829 entries.

Suggested by an architect for the exposition, Alfred Jensen Roewad, red and white was the winning combination. He also submitted several images of how the colors could be displayed, including designs featuring a now familiar Y-shape.

It wasn’t until 1915 that the city’s lack of a flag became an issue. Ald. James A. Kearns, 31st, introduced a resolution calling for an official design. The City Council agreed with Kearns, who feared Chicago was lagging other major cities, and established the Chicago Municipal Flag Commission.

The commission sifted through more than 1,000 submissions before settling on an original design by writer and flag aficianado Wallace Rice. Coincidentally, Rice was originally retained to set the design rules of the competition.

The designs were submitted and approved by the City Council on April 4, 1917 — the same day the U.S. Senate voted to support U.S. entry into World War I. There were 63 “Yeas” and no dissents.

Rice’s explanations for each element:

“Blue, the color of the lake and river, of distant mountains, and of the oceans.” — Rice, Chicago flag designer

Rice’s explanations for each element:

“I purposely made the stars six-pointed. Five-point stars are the symbols of states and could manifestly have no place in a municipal flag. Mayor Thompson is making not only himself but the flag ridiculous by ordering the change.” Rice, Chicago flag designer

The original design included two six-pointed stars, each draped with its own symbolism. This left room for additional images. The city flag commission also devised 23 additional logos for various city departments (mayor, City Council, city clerk, etc.), which could be added to the flag, if desired. Each logo would fit into a circle and could displayed by its corresponding office.

From the original 1917 design

Each star bears a specific meaning, and each of its six points does too. As the Chicago Public Library points out, however, the meaning of the points is mostly unofficial, with explanations varying from different sources. The first two stars from the 1917 edition of the flag are accounted for in City Council records from 1917, but the others are not.

The first star represents the Great Chicago Fire of 1871.

Points in this star stand for material ideas in which the city was known for or seeking pre-eminence:

From the original 1917 design

“Taken together, the two stars symbolize the Chicago spirit,” Rice said. He deliberately placed them on the banner’s left so stars could be added to mark events, if approved by the City Council.

The second star represents the World’s Columbian Exposition of 1893.