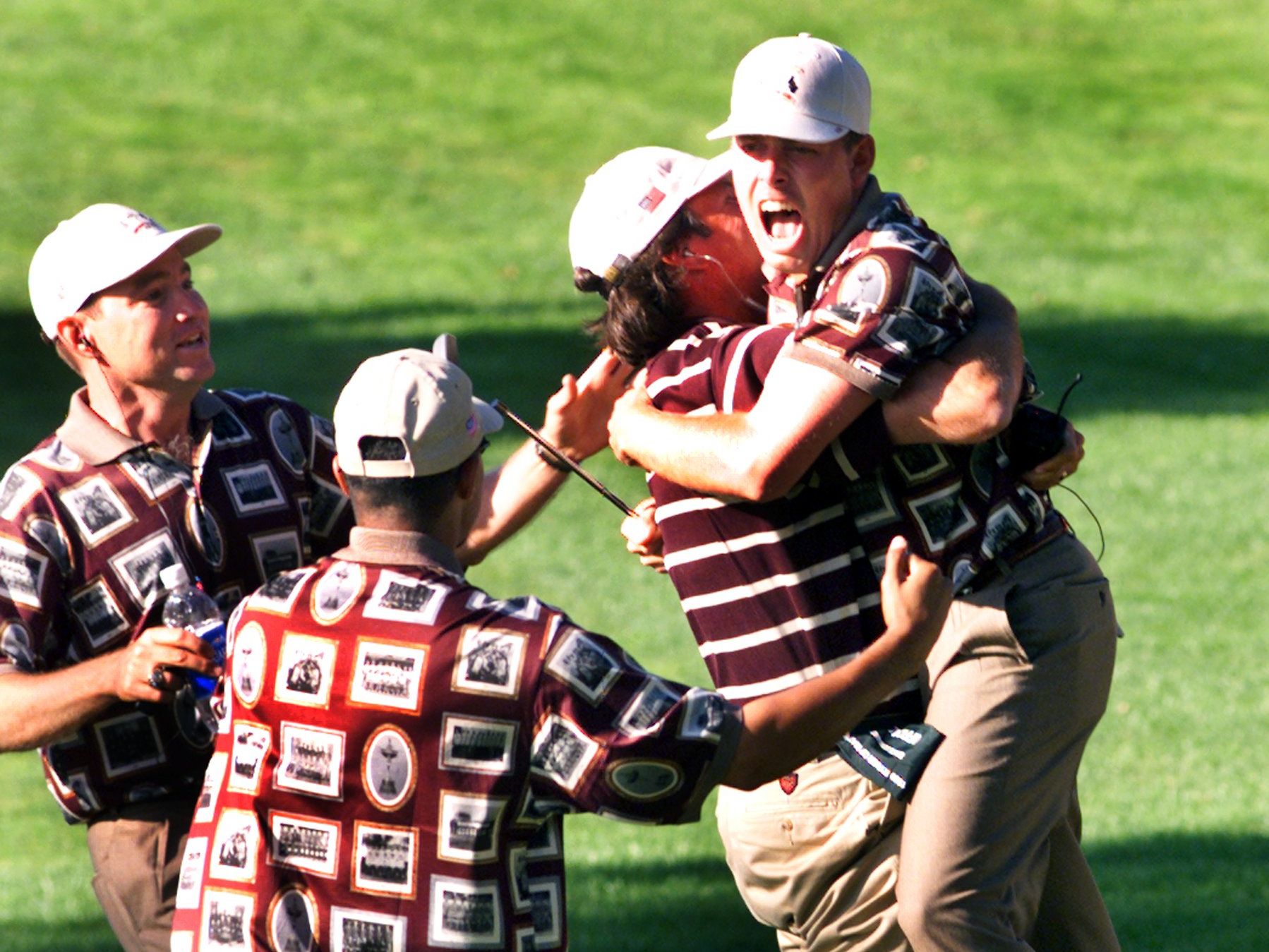 The Country Club is long-established as one of golf’s most venerable venues. Much history has been made at the Brookline course in its 140 years. The greatest of those moments have become enduring parts of the sport’s lore.

Here is a brief oral history of three of the most legendary moments: Brookline’s own Francis Ouimet’s stunning win in a playoff as an amateur in the 1913 US Open; Curtis Strange’s victory over Nick Faldo in a playoff in the 1988 US Open; and Justin Leonard’s long putt that clinched the United States’s improbable rally to defeat Europe in the 1999 Ryder Cup.

The match occurred more than 100 years ago, but anyone with a modicum of knowledge of golf history is familiar with the tale of Ouimet’s victory in the 1913 US Open.

An amateur who grew up across the street from The Country Club and began caddying there at age 11, he defeated British professional stars Harry Vardon and Ted Ray in a playoff round in rainy weather. The final round drew an enormous crowd, and Ouimet’s feat was front-page news nationwide.

Connor T. Lewis, Society of Golf Historians: “Ouimet’s win provided the spark that lit America’s fire for the game because it showed the world that golf was more than a game played in and dominated by the United Kingdom.

“The local boy who won the US Open would have been a great story on its own. But beating the unbeatable Harry Vardon — in the minds of many the greatest golfer to have ever lived up until that point — was unthinkable.”

Ouimet’s win was the subject of Mark Frost’s book, “The Greatest Game Ever Played,” which was adapted into a 2005 film starring Shia LaBeouf.

Lewis: “The movie portrays Ouimet as barely winning the playoff, but he delivered a stellar round, shooting minus-1 to beat Ray by six strokes and Vardon by five. It wasn’t a squeak-by victory, but a resounding playoff parade.

“Were there critical points where he could have folded? Definitely. There was a point in his fourth round where he was plus-8 through 12 holes. Now this was under horrible weather conditions, but Ouimet settled in, birdieing the 13th and then delivering a clutch birdie on the 17th to tie Vardon and Ray and force extra holes.”

One dominating playoff round later by the kid from across the street, and American golf had its first storybook tale to tell.

Lewis: “A century later, it’s still amazing to think about. The 1913 US Open was won by a 20-year-old amateur golfer who collected $0 for the victory. It was in many ways American sports’s first David and Goliath story.”

Now here’s a cool coincidence. The first three US Opens to be played at The Country Club all required a playoff round. There was Ouimet over Vardon and Ray in ‘13, of course. Julius Boros over Arnold Palmer and Jacky Cupit in 1963. And the most recent one – Curtis Strange’s win over Nick Faldo in 1988.

Strange famously salvaged his Sunday round and forced the Monday playoff by saving par from a bunker on 18 after he had three-putted from 15 feet on the 17th to plunge into a tie.

Curtis Strange: “The Country Club is a tough enough golf course. You make missteps and you think it’s yourself, but sometimes it’s the golf course, the situation, the atmosphere. Seventeen I made a mistake, three-putting. And 18 was all a result of driving in the rough.

“From there, you just kind of do your thing. The last thing you want to think about is the US Open, the history, the trophy, what it would mean, and all the stuff people bring up later on. You can’t allow yourself to do that.”

After recovering from the debacle on 17 to force a playoff, Strange had what he said was one of the “three or four most sleepless nights” of his life that Sunday night. But he played well Monday, taking a one-stroke lead through 12 holes.

Strange began pulling away on 13, making birdie on a 25-foot putt while Faldo ended up with a bogey to fall three strokes back. Faldo also bogeyed 15, 17, and 18, and with victory all but certain, the Boston crowd saluted the Virginia native Strange with cascading cheers as he walked from the 17th to the 18th, on the verge of clinching his first of back-to-back US Opens.

Strange: “Someone told me Sunday night, don’t be disappointed if there’s not a whole lot of fans out there. People go back to work, volunteers go back to work, blah blah blah. And I got out there at 1 that afternoon and there were already 15,000 people out there. And with just two guys, that seems like an enormous amount.

“Those fans are one of my most vivid memories from that time. As I’ve said often, Boston adopted a Southern boy that day.”

‘Wait a second, my match could actually matter’

Eleven years after Strange’s win, the gallery at The Country Club didn’t have to adopt a new favorite. The United States was the home team against the Europeans in the 1999 Ryder Cup in what was dubbed “The Battle of Brookline.”

But heading into Sunday’s final round, the US had lost too many battles and was on the verge of losing the war. It trailed, 10-6, and though captain Ben Crenshaw said he had “a good feeling” during a Saturday night press conference, a US win would require a full-on European collapse.

And that’s exactly what happened. The US won the first six matches Sunday, eventually moving into a 14-12 lead. When Justin Leonard holed a 45-foot putt on 17 to assure halving his match with Jose Maria Olazabal, the US had clinched a comeback for the ages — and a celebration commenced that would not soon be forgotten.

Justin Leonard: “The way my front nine went, I didn’t think I had much of a chance. I was 4 down through 11, and Davis Love came out after he had finished his match and was walking with me inside the ropes off the 12th tee, just trying to encourage me.

“I said, ‘Look, I don’t know if it’s going to happen back here. Why don’t you go follow somebody else, and if my match gets close, you can come back here with me.’ And he said, ‘No, I’m going to stay here with you.’

“I think that helped. I made about an 8- or 10-foot putt at 12 to win the hole, 13 Jose Maria didn’t hit a good tee shot and I two-putted for par there. On 14, which for the Ryder Cup was a par-5 up the hill, I made about a 20-footer after Jose Maria had missed and kind of got this momentum going.

“And I was like, ‘Wait a second, my match could actually matter in all of this.’ ”

Leonard made a big putt on 15, halved 16, and then got a glimpse of what was possible.

Leonard: “When I was walking off the 17th tee, there was a leaderboard maybe behind 15 green that I could see. And I figured out that if everything ahead of me played out the way it was supposed to, that we were going to be at 14 points, and all I needed was a half-point for us to win.

“And then I tried to flush all of that out my mind. Putt goes in, everybody goes nuts, and unfortunately it took everybody a little time to get settled down.”

US players and wives swarmed Leonard in celebration, before Olazabal could attempt his putt. Spectators flouted etiquette by heckling European players. There have been more gracious victories.

Leonard: “It was unfortunate. There were eight or nine US team members there on the green, along with wives. If it happened somewhere else on the course, what happened wouldn’t have happened. It would have just been the crowd reacting. Unfortunately, my celebration spilled over. But it sure is memorable, right?”