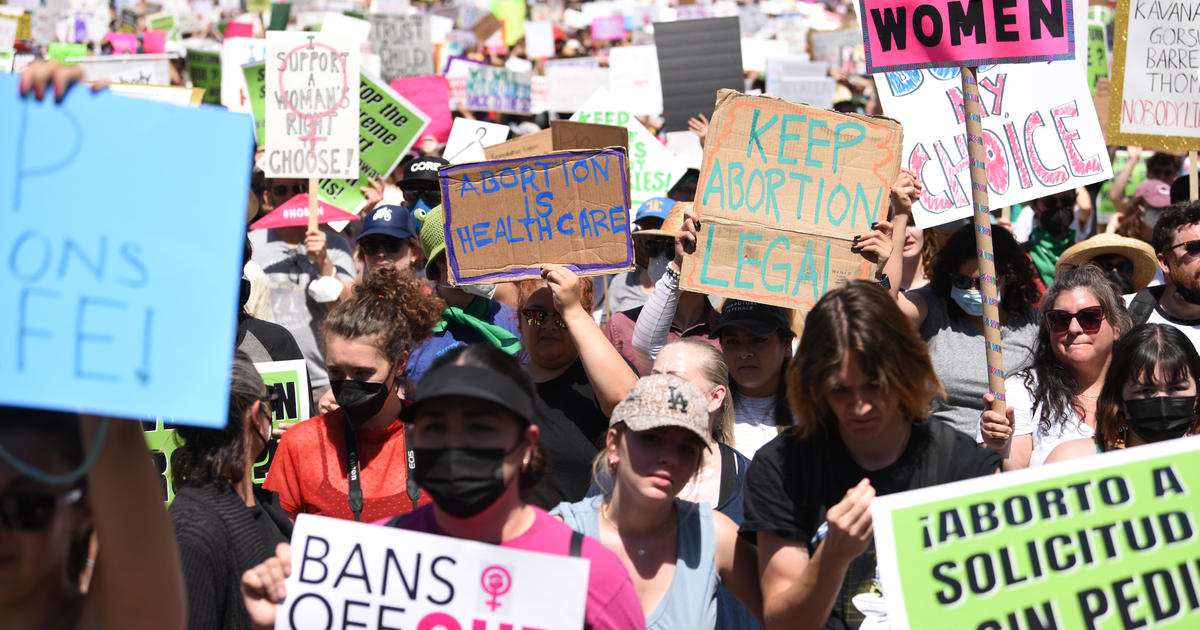 The rallies began taking place as early as 5 a.m. in Pershing Square before gatherers began to march at around 9 a.m., ending up in front of Los Angeles City Hall.

Women and men of all ages were seen marching through the streets of Downtown Los Angeles, armed with signs and banners in support of abortion rights.

CBS reporters were on scene to speak with several demonstrators.

“I’m from the 70s. Everybody I know had an abortion,” said Kate Schmidt, who detailed how she herself had one in her 20s. “I’m a recovering alcoholic. I got pregnant when I was drinking. I was an athlete traveling around in Europe and we decided that was the best thing to do.”

Jerica Lieberman, a fellow abortion rights activist, echoed that sentiment, detailing a high school friend who was blessed to have the choice when she got pregnant.

“I want my nieces to have the same rights that I did. I want everybody to be able to not have to drive out of state and go bankrupt just to get an abortion if they need one,” she continued.

One mother brought her young sons along with her on Saturday, hoping that they’ll realize the importance of the movement as they get older.

“Whether they remember this or not they’ll always know that they were here and that they were representing humanity and that’s really important to us,” said Annie Blankenship, noting that teaching them about the choices people should have over their own bodies is crucial, even if they’ll never have to make it.

Regardless of the Supreme Court decision, California Governor Gavin Newsom has promised protections for all American women.

Still, Californians joined the throngs of protestors in support of the women who may no longer have a choice if the decision is eventually overturned.

Los Angeles Police Department officials detailed that while anti-abortion activists were also in attendance at the rally in Downtown Los Angeles, only one arrest was made for battery.