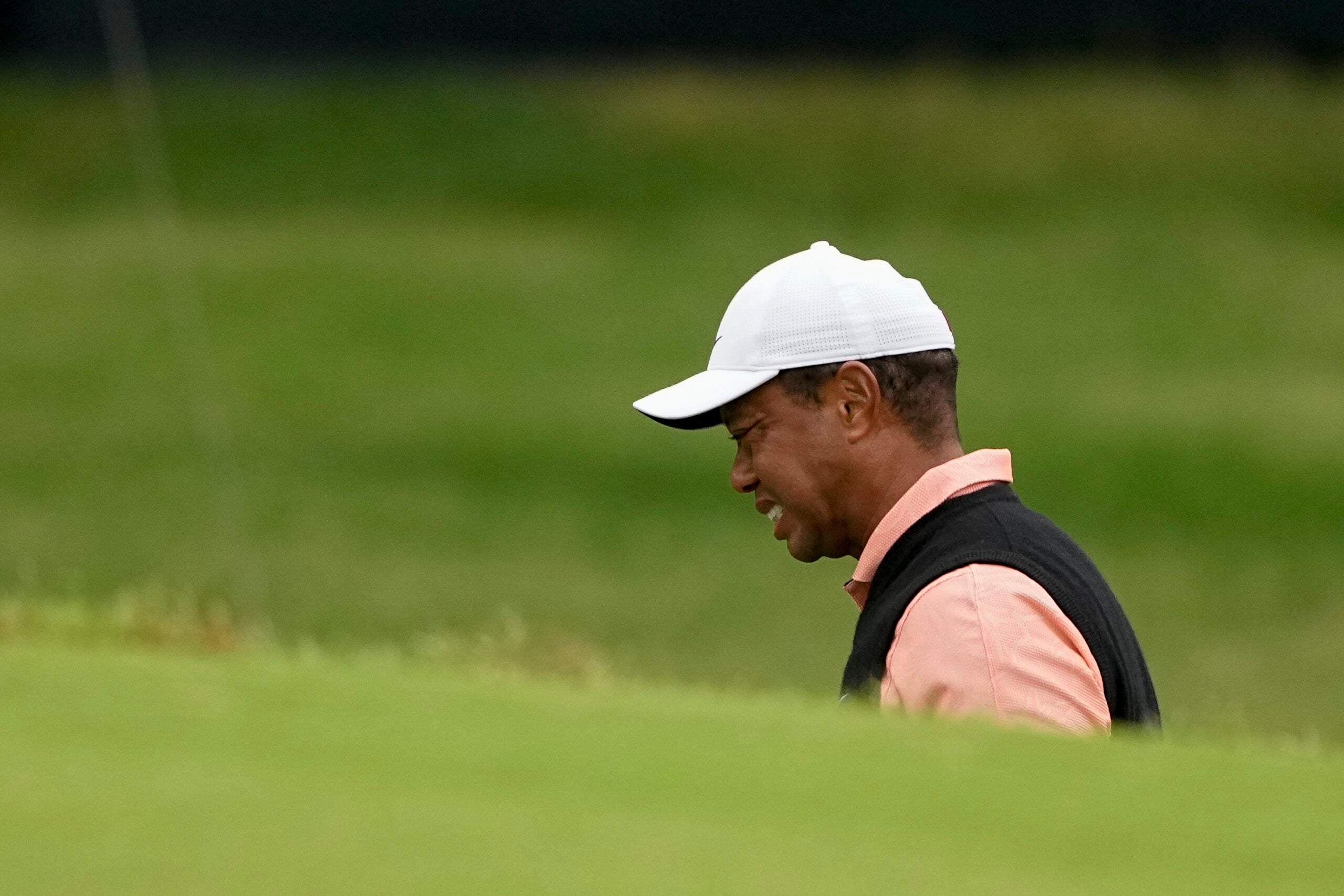 TULSA, Okla. (AP) — Tiger Woods produced a couple of firsts Saturday, neither cause for a fist pump. He posted his highest score ever in the PGA Championship, and later withdrew from a major for the first time in his pro career.

Hours after Woods limped his way to a 9-over 79 in the third round at Southern Hills, he informed the PGA of America of his withdrawal.

Anyone who watched the staggered steps from a right leg that was battered 15 months ago in a car crash should not have been surprised. Woods declined media interviews after his round, speaking only to a pool reporter.

He was asked if days like this — high pain, high score — made him question the process it takes to play and if he would tee it up on Sunday.

The PGA of America announced his withdrawal after the third round ended. Woods was 21 shots behind Mito Pereira of Chile, who takes a three-shot lead into the final round.

For Woods, attention now turns to next month at the U.S. Open. When he made the cut at the Masters in his first time walking and competing against the best since the February 2021 car crash in Los Angeles, he said he would be at the British Open at St. Andrews in July.

He did not mention the PGA Championship or U.S. Open, wanting to assess his recovery. But he made a trip to Southern Hills in the weeks ahead of the PGA and said he felt better than he did at the Masters.

That lasted only so long.

Even as he grimaced at times, Woods produced his most compelling golf on Friday afternoon with he rallied to make the cut with a series of clutch putts and short-game wizardry.

Woods has played through pain during his career, more memorably the 2008 U.S. Open at Torrey Pines that he won with a double stress fracture in his left leg and shredded ligaments in his left knee that required season-ending surgery when it was over.

But on Saturday, walking gingerly on a course soaked by a half-inch of rain in the early morning, he had reason to wonder if making the cut was worth it.

“I didn’t do anything right,” Woods said after making a 5-foot par putt on the 18th to break 80. “I didn’t hit many good shots. Consequently, I ended up with a pretty high score.”

It wasn’t his worst in a major. There was that 81 in the 2002 British Open in the raging wind and bitter cold of Muirfield that ended his hopes for a Grand Slam. He had an 80 at Chambers Bay in the 2015 U.S. Open while recovering from the first of what would be five back surgeries.

This was painful to watch, and not just the sloppy play with wedges and two water balls.

Much like the weekend at the Masters, his first competition since the February 2021 car crash that mangled his right leg, the limp became more pronounced as the day went on.

And the weather — the high 50s, compared with a heat index that approached triple digits earlier in the week — didn’t help.

“You feel so sorry for him having to go through this,” said Shaun Norris, the South African who played with Woods before a large gallery, but certainly not the size of the previous two days.

“But then again, you also see the type of person that he is, that he grinds through everything and pushes himself, even all the pain and that,” Norris said. “It’s not easy to see a guy like him have to go through that and struggle like that. He’s swinging it nicely, and I think he’ll be back once he gets back to normal health and sorts out all the problems.”

Woods chose not to speak to the media, instead offering a few thoughts to a pool reporter. He didn’t get into one of the clear problems, which was distance control. Whether the ball wasn’t flying as far because of the cold or his speed was slower than he realized, there were two occasions when Woods was stunned to see where his ball landed.

One was on the par-3 sixth hole, when Woods’ shot not only came up short, it found the water. He put his next shot short into the shaggy collar, flubbed a chip and walked off with a triple bogey.

And that was only the start.

Woods made five straight bogeys from the ninth hole. One of them was on the par-3 11th, when he posed over an 8-iron only to see it land short — well short. He looked back at his caddie and said, “That’s short of the bunker!”

His pitch up the hill had so much pace that it ran over the green and down the slope, and he had to make a 4-footer to escape with bogey. This was one hole after a similar pitch up the hill from slightly farther away settled on the top shelf of a green. The pin was at the front.

And then on the par-5 13th, when a bold play to go over the green from the first cut of rough and into a stiff wind appeared to be pay off, his pitch from 100 feet went 35 feet past the pin and off the green. A likely birdie turned into a bogey.

“Couldn’t get off the bogey train,” he said.

Even when it looked like a lost cause, and there were moments where it looked as though his right knee began to buckle, Woods rarely rushed a shot or a putt.

The lone bright spot was a 35-foot birdie putt on the 15th, and Woods forced a smile as he swiped his right index finger in the air to mark his first birdie of the day.

It also was his only one.

He talked Friday about needing a hot round, and that wasn’t available to him on a cold day. He ultimately decided it wasn’t worth going through again.