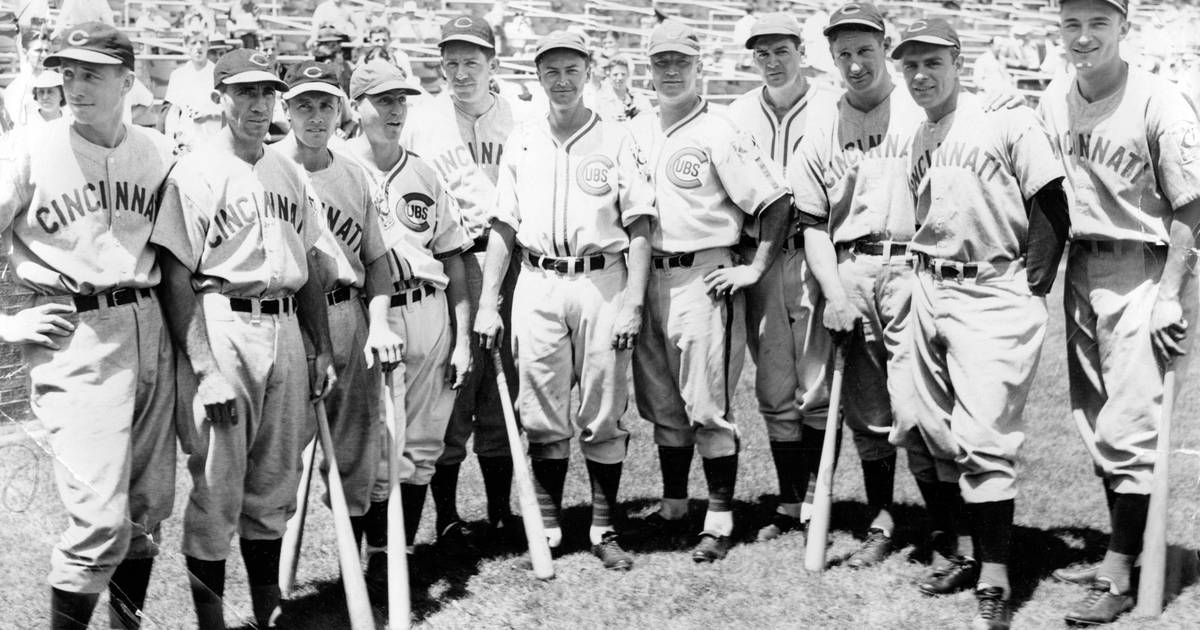 Long before the movie version, Arch Ward created a field of dreams. His was called “The Game of the Century,” and the Tribune’s sports editor based it on a perennial fantasy of baseball fans:

If Sweetbread Bailey was pitching and Babe Ruth was batting, who would prevail?

The question was as frustrating as it is fascinating. One played in the National League, the other in the American League, and they never crossed base paths unless in a World Series.

But Ward’s imagination conceived a means to settle such puzzlers: A contest pitting the best players of each league during a World’s Fair celebrating Chicago’s 100th birthday.

“A smart inspiration in the Tribune’s sporting department will give Chicago as an incident of the Fair, the baseball game of all time,” the paper reported on May 23, 1933. “The baseball managements could have found a million reasons why it could not be done but found every reason why it should be.”

The All-Star Game’s birth was a fortuitous byproduct of the Great Depression. In 1933, Edward Kelly, Chicago’s newly installed mayor, was worried. The city was committed to hosting a World’s Fair. But with millions of Americans out of work, how could Chicago attract enough visitors to ensure the fair’s success?

Kelly took the question to Col. Robert R. McCormick, the Tribune’s publisher. There was some discussion of an athletic event, and McCormick turned the problem over to Ward, who had a talent for not only covering athletic events, but creating them.

Ward knew that the novelty of an all-star game would get a few days advance coverage plus a post-mortem. The trick was to keep the public’s attention for much longer with headlines like that of the May 30 edition:

By Ward’s design, the lineups for the game were established by a democratic process. The Tribune asked readers to vote for their favorite players, and 47 papers quickly followed suit.

“The count will be forwarded to the Tribune every few days,” Ward explained. “At least twice the number of papers which have already joined will be enrolled in a few days, judging from the inquires over the weekend.”

That transformed the contest from a single ballgame into a daily face-off between fans. Some moved players around like a savvy manager. The American League had two hard-hitting first basemen. When the Yankees’ Lou Gehrig piled up an unbeatable lead, fans of the Athletics’ Jimmy Foxx still wanted him in the game.

“Foxx once played third base for the Athletics and played it pretty well,” the Tribune noted. “The fans began voting for Foxx the third baseman.”

But the White Sox’s Jimmy Dykes won the position, and the American League, bolstered by Babe Ruth’s two-run homer, beat the National League, 4-2.

A decade earlier, Ward had cofounded the Golden Gloves with his counterpart at the New York Daily News, another Tribune paper. Their creation evolved into international boxing competition and added to the long list of Ward’s celebrity friends. The mornings of his professional bouts, heavyweight champion Rocky Marciano would have breakfast with Ward.

Ward didn’t tout his own celebrity. His personal style was unassuming, the product of a Middle American upbringing of which he was proud. Born on a farm near Irwin, Illinois, he returned there shortly before his death for a final look at the barn of his youth.

“I made baseballs with twine, black tape and glue,” he recalled. “I practiced pitching against the side of that barn. I pictured myself as a major league pitcher or shortstop.”

He liked to quote Knute Rockne, the famed football coach at the University of Notre Dame where Ward was a student and Rockne’s publicist.

“The farm boy is the best prospect for America’s future leaders,” Rockne told Ward. “The city boy is too soft, and his schools make him mushier with their talk about character building.” Rockne grew up in Chicago’s Logan Square neighborhood.

Named the Tribune’s sports editor in 1936, Ward inherited the “In the Wake of the News” column, a potpourri of gossip, quips and readers’ contributions. One reader reminded Ward of his predecessor Ring Lardner’s description of a White Sox rally: “This consisted of ‘a dropped third strike,’ a ‘base on balls, a scratch hit, an error, and a close decision.’ ”

But his words could capture an indelible moment. For instance, Joe Louis flooring Max Schmeling with a blizzard of punches at the opening bell of their 1938 heavyweight championship bout:

“Schmeling knew then and there that there was no escaping this cold, expressionless figure whose opening blast blurred his eyes and raised a welt on his left cheek,” Ward recalled decades later. “A half smile caught on his face became a fixed grin.”

In 1932, Ward ignited another fans’ debate, by noting that Jack Chevigny, coach of the Chicago Cardinals professional football team, thought that the 1930 Notre Dame squad was the best football team he had ever seen.

“The conductor of this column has received hundreds of letters commenting on Chevigny’s ratings,” Ward reported. “Professional players, college coaches, and fans who lay it on the line every Sunday have had their say.”

Capitalizing on its readers’ enthusiasm, Ward created, and the Tribune sponsored, a 1934 College All=Star game in Soldier Field. It began with a deafening display of pageantry, as the paper reported:

“A huge spotlight shined down from a far corner of the field. The band struck up ‘The Maize and the Blue’ and Michigan men and women began to shout. Then into the spotlight alone stepped Michigan’s great center Chuck Bernard. Next came the songs of Purdue and Pittsburgh, and Fritz Febel of Purdue and Frank Walton of Pittsburgh, guards on this great All- American team, took their turns before the floodlights.”

When all the school songs were sung, 79,432 fans saw the college players and the Chicago Bears, champions of the National Football League, battle to a 0-0 tie. The Associated Press reported: “Collegians Outplay Champions of Pro League, Gaining Six First Downs to Three”

The Vintage Tribune newsletter is a deep dive into the Chicago Tribune’s archives featuring photos and stories about the people, places and events that shape the city’s past, present and future.

The proceeds of the game went to charities, as did those from subsequent games, until the series ended in 1976.

Ward died in 1955, a few days before the All-Star (baseball) game. His funeral, set for the day of the game, resembled a monarch’s coronation. The game was set back an hour, so baseball’s honchos could get back from Chicago in time to see the first ball thrown out in Milwaukee.

Bishop Bernard Shiel led the services at Our Lady of Mount Carmel Church on Belmont Avenue. Rocky Marciano interrupted his training and flew in from New York. Former boxing champions Barney Ross and Tony Zale were there. So, too, were yesteryear stars of every sport Ward wrote about.

The Rev. Theodore Hesburgh, Notre Dame’s president, preached the sermon. “Arch Ward had a passion for sincerity and fair play, a love of good and his fellow men,” Hesburgh said. “In the process he became immortalized in the hearts of millions.”

When the collegians kicked three field goals to beat the Cleveland Browns in that year’s All-Star Football Game, the Tribune noted that Ward had a special affection not for the most gifted but those who give it their all.

“Knute Rockne’s successors down at Notre Dame, when all else failed, used to tell their squad, ‘This one is for Rock,’ and their young pupils responded like tigers,” the Tribune wrote. “We hope we are not too trite in suggesting that this one was for Arch Ward.”