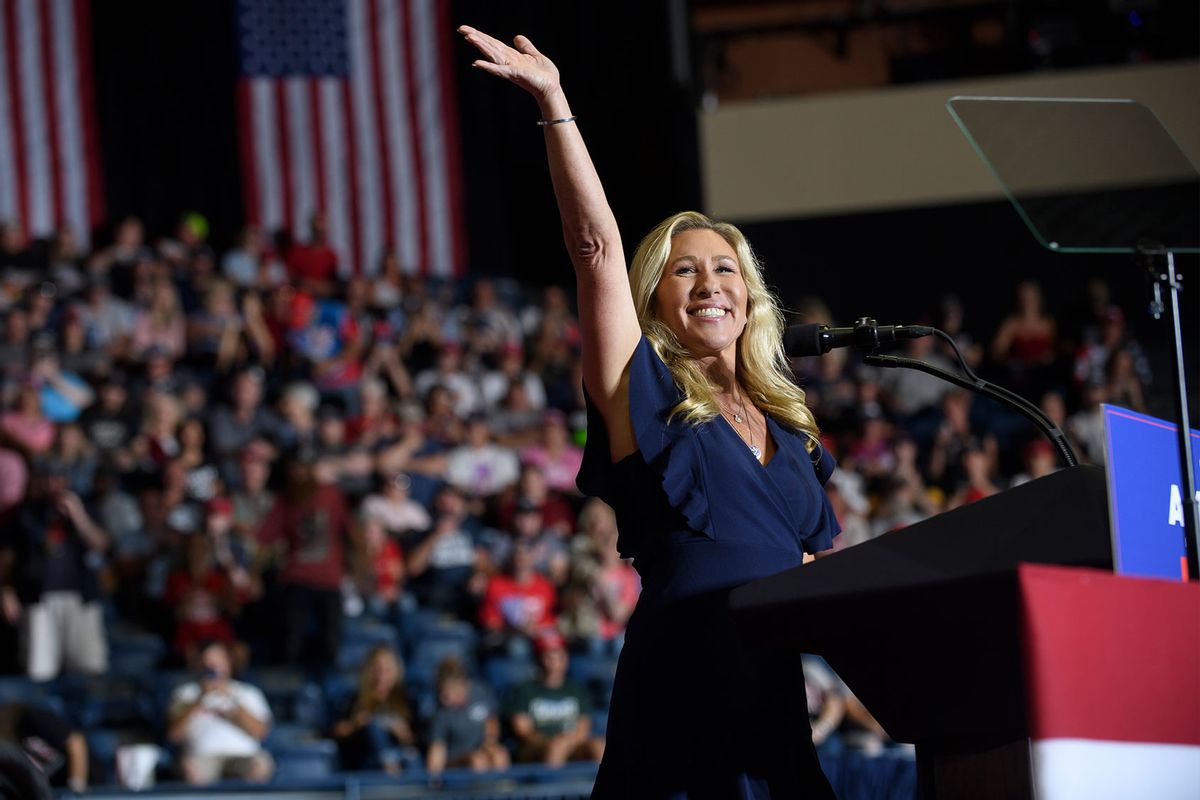 “The widespread assumption that only Democrats have any agency or causal influence over American politics.” This is famously known as “Murc’s Law,” named after a commenter at the blog Lawyers, Guns, and Money who noticed years ago the habitual assumption among the punditry that Republican misbehavior can only be caused by Democrats. Do Republicans reject climate science? Must be because Democrats failed to persuade them! Did Republicans pass unpopular tax cuts for the rich? Must be that Democrats didn’t do enough to guide them to better choices! Do Republicans keep voting for lunatics and fascists? It must be the fault of Democrats for being mean to them! Even Donald Trump’s election was widely blamed on Democrats — who voted against him, to be clear — on the bizarre grounds that Barack Obama should have rolled over and just let Mitt Romney win in 2012.

We’re about to return to a Beltway narrative in which nothing Republicans do is actually their fault: It is somehow all because Democrats have failed to manage them properly and are way too mean.

Republicans are about to take power in the House of Representatives once again, and so, with exhausting predictability, we return to a Beltway narrative where none of the choices they will make with that power are their fault: It is somehow all because Democrats have failed to manage Republicans properly. Unsurprisingly, the latest example comes from Politico, which pins the blame for the rise of right-wing superstar Rep. Marjorie Taylor Greene not on the voters who sent her to Congress or the GOP leaders who indulge her or the conservative media that celebrates her. Instead, Greene’s popularity with Republicans is laid at the feet of Joe Biden and the Democrats.

“Biden world once ignored Marjorie Taylor Greene. Now it’s making her the face of the GOP,” announces a Thursday headline in Politico. Underneath it, Eugene Daniels and Jonathan Lemire write that the Biden White House has tried to turn Greene “into the poster child of the incoming House GOP majority.”

But of course Biden had nothing to do with that, because Republicans had already done it. Republicans in her district enthusiastically voted her into office. Republicans gave Greene a standing ovation in response to her remarks claiming that school shootings like Parkland and Sandy Hook were “false flags.” Republicans made her one of the top fundraisers in the House. Republican leadership is currently indulging Greene’s demands to treat the Jan. 6 insurrectionists as “political prisoners.”

As Heather Digby Parton wrote previously at Salon, Minority Leader Kevin McCarthy, who is nominally the top Republican in the House, has basically allowed Greene to become a “shadow speaker” who keeps him “on a short leash.” To Politico reporters, evidently, this makes McCarthy a victim. They write that he has “no choice but to offer the hardcore members prominent posts in exchange for their support.”

More nonsense, of course. There’s always a choice, even if that choice is just to go home and live a life of lobbyist luxury. Kevin McCarthy goes along with the open fascists of his party because he wants to. Remember that he voted to nullify the 2020 election, even after Trump sent a mob to the Capitol to physically threaten members of Congress. He may play-act moderation for the gullible Beltway press corps, but McCarthy has been a cheerleader for the Trumpist agenda all along.

The D.C. press corps covers Republicans not as actual adults who should be held responsible for their own decisions, but as lost and confused children who are the pawns of other people’s machinations.

All of this is far too familiar: The D.C. press corps covers Republicans as if they were not actual adults who should be held responsible for their own decisions, but as lost and confused children who are the pawns of other people’s machinations. When McCarthy kisses Trump’s ring and elevates the far-right members of his party, he’s portrayed as a hapless stooge. But the Trumpists who manipulate McCarthy and force him to grovel are not held to account either. As with the Politico report, blame for their behavior is often assigned to Democrats for failing to do more to control them. But, as Daniels and Lemire tacitly admit, Biden tried the “ignore them and they’ll go away” tactic for more than a year and it didn’t work. So now he’s being blamed for amplifying Greene’s popularity by belatedly acknowledging her existence.

This tendency to excuse all Republican misbehavior by treating them like purely reactive animals hit its zenith this week, in response to reports that Trump had loudmouthed antisemite Ye (formerly Kanye West), along with his Holocaust-denying buddy Nick Fuentes, over to dinner at Mar-a-Lago. Obviously, the reason Trump keeps finding himself in the company of white supremacists is that he agrees with their views, something he hasn’t exactly been subtle about. Still, in the face of considerable blowback, Trump used his standard go-to excuse: He simply doesn’t know these white supremacists who keep showing up next to him! Absolutely no idea who they are, darn it all!

Trump coughs up this obvious lie because it creates a tiny envelope of not-very-plausible deniability while allowing him to avoid denounce people like Ye and Fuentes. He’s used this tactic for years, but the press still falls for it every time. Witness this credulous story from NBC News that paints Trump not as a racist who enjoys the company of other racists, but as a hapless goofball starved for attention who “was essentially tricked by the rapper and his guests” into breaking bread with a big fan whose views on race relations are just louder versions of Trump’s own.

NBC’s source for the claim was an innocent victim in the dinner-date fiasco was Milo Yiannopoulos, a right-wing troll who works for Ye (and recently worked for Greene) and who has a long and storied history of having zero respect for the truth. This could perhaps be a rare example of Yiannopoulos telling the truth, but it’s far likelier that he knows the mainstream media is always ready to excuse Republican politicians who say or do execrable things as victims of circumstance, not actual autonomous grownups making their own choices. It’s no skin off Yiannopoulos’ back to take the fall for Trump’s dinner with neo-Nazis. If anything, it helps bolster his image as a “dirty trickster” — while also creating at least faint excuses for Trump and his supporters.

Indeed, the Trump campaign followed up this report by claiming they’ve assigned Trump a 24/7 babysitter, to make sure he has no more “accidental” meetings with white nationalists. (OK, Trump’s people did not literally say “babysitter.”) It really ought to be an embarrassment that a 76-year-old former president and third-time presidential candidate requires a full-time minder. But this also feeds into the larger Beltway narrative which holds that Republicans are never to blame for whatever they do, even when it’s something gobsmackingly awful, such as having dinner with a notorious fascist and a downward-spiraling rapper who has declared “death con 3 On JEWISH PEOPLE.”

And somehow — this is the deeply obvious but really important part — this perceived inability of Republicans to be responsible for their own choices never counts against them (at least in the mainstream media narrative) when they make the risible argument that they deserve to run the country.

Trump is running for president again and Republicans take control of the House next month. That can only mean we’re about to see a dramatic escalation in nutty right-wing antics. Trump will continue to associate with scumbags. Republicans will threaten to torpedo the global economy to demand cuts to Social Security. House committees will be hijacked for GOP showboating about stupid conspiracy theories involving Hunter Biden’s laptop and other irrelevant or imaginary pseudo-scandals. Trump will make any number of racist and sexist remarks and Republicans will claim they haven’t heard about it and, gosh, doesn’t he say the darndest things?

There are two ways for the press to deal with these depressing inevitabilities. Option No. 1 is to say straight out that the GOP is run by a bunch of shameless liars who are waging war on truth and democracy. But doing that, of course, means giving up the pretense that “both sides” are the same. The other option is to stubbornly refuse to see the abundant evidence that Republicans are deliberately sinister actors and to go on depicting them as wayward children who honestly can’t be expected to know any better. The former frame fulfills the purported mission of journalism, which is to tell the truth. But alas, we’re probably in for at least two years of elaborate apologies and roundabout justifications and Murc’s Law proving out once again across the media universe.