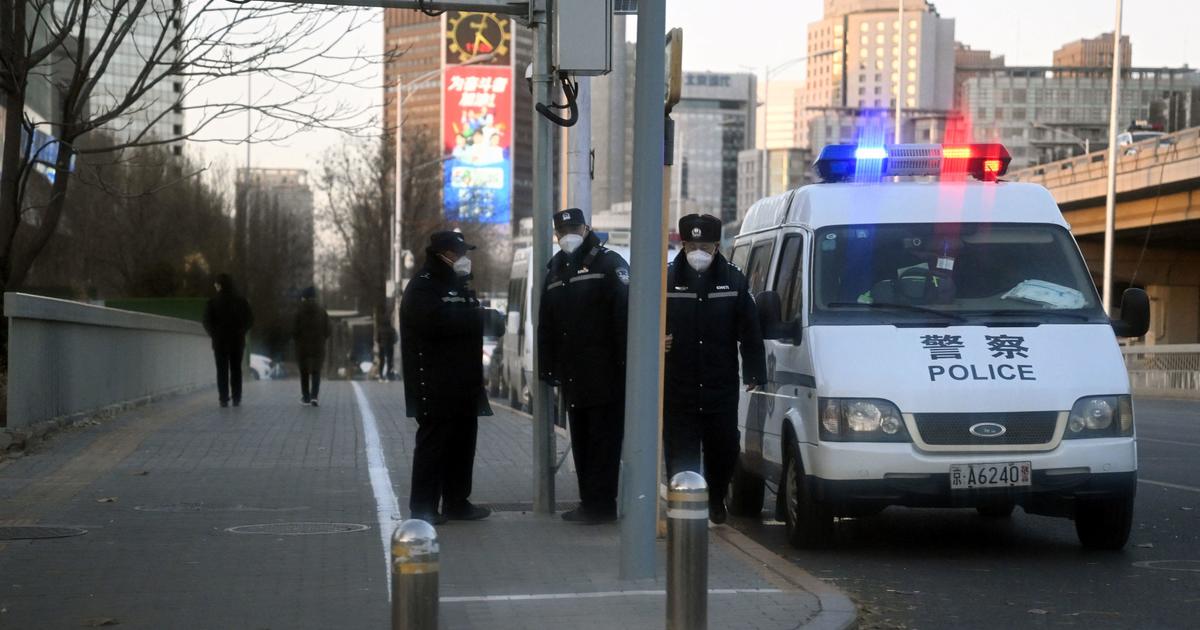 Chinese universities sent students home and police fanned out in Beijing and Shanghai to prevent more protests Tuesday after crowds angered by severe anti-virus restrictions called for leader Xi Jinping to resign in the biggest show of public dissent in decades.

Authorities have eased some controls after demonstrations in at least eight mainland cities and Hong Kong, but showed no sign of backing off their larger “zero-COVID” strategy that has confined millions of people to their homes for months at a time. Security forces have detained an unknown number of people and stepped up surveillance.

With police out in force, there was no word of protests Tuesday in Beijing, Shanghai or other major cities that saw crowds gather over the weekend. Those widespread demonstrations were unprecedented since the army crushed the 1989 student-led pro-democracy movement centered on Beijing’s Tiananmen Square.

Tsinghua University, where students rallied, and other schools in Beijing and the southern province of Guangdong said they were protecting students from COVID-19 by sending them home.

But dispersing them to far-flung hometowns also reduces the likelihood of more demonstrations. Chinese leaders are especially wary of universities, which have been hotbeds of activism including the Tiananmen protests.

On Sunday, Tsinghua students were told they could go home early for the semester and that the school would arrange buses to take them to the train station or airport.

Nine student dorms at Tsinghua were closed Monday after some students positive for COVID-19, according to one who noted the closure would make it hard for crowds to gather. The student gave only his surname, Chen, for fear of retribution from authorities.

Beijing Forestry University also said it would arrange for students to return home. It said its faculty and students all tested negative for the virus.

Universities said classes and final exams would be conducted online.

Authorities hope to “defuse the situation” by clearing out campuses, said Dali Yang, an expert on Chinese politics at the University of Chicago.

Depending on how tough a position the government takes, protests could continue on a “rotational” basis, with new groups taking turns, he said.

But many people are nervous after police detained some protesters and warned them against demonstrating again.

People who attended the weekend’s protests said they were contacted by police demanding information about their whereabouts, according to CBS News partner network BBC News.

Other people were stopped on the street and in the subway by police, who searched their phones for the word “Urumqi,” the name of the city where protests were triggered by an apartment fire, CBS News’ Shuai Zhang reported. Ten people died in the fire, which broke out last week and prompted questions online about whether firefighters or victims trying to escape were blocked by intensive anti-COVID controls.

The people who were stopped were allegedly told to delete international social media apps, and their personal information was logged.

Images viewed by The Associated Press of photos from a weekend protest showed police shoving people into their cars. Some people were also swept up in police raids after demonstrations ended.

One such person, who lived near the site of a protest in Shanghai, was detained Sunday and held until Tuesday morning, according to two friends who also insisted on anonymity for fear of retribution from authorities.

One friend said the person was questioned about the protest but wasn’t hit or physically abused.

In Beijing, police on Monday visited a resident who attended a protest the previous night, according to a friend who refused to be identified for fear of retaliation. He said the police questioned the resident and warned him not to go more protests.

China’s “zero-COVID” policy has helped keep case numbers lower than those of the United States and other major countries. But public tolerance of the onerous restrictions has eroded as people in some areas have been confined at home for up to four months and said they struggled to get access to food and medicine.

The Chinese Communist Party promised last month to reduce disruption by changing quarantine and other rules. But a spike in infections has prompted cities to tighten controls, fueling public frustration.

Most protesters over the weekend complained about excessive restrictions, but some turned their anger at Xi, China’s most powerful leader since at least the 1980s.

In a video that was verified by The Associated Press, a crowd in Shanghai on Saturday chanted, “Xi Jinping! Step down! CCP! Step down!” Such direct criticism of Xi is unprecedented.

While some anti-virus restrictions were eased Monday in a possible effort to defuse public anger, authorities are believed to fear a wave of infections and deaths that could overwhelm the health care system should they lift the measures further.

China’s numbers remain low in comparison to the U.S. and other countries, but few Chinese have been exposed to the virus. Elderly vaccination rates lag other countries as seniors decline the jabs, and China’s domestically developed vaccines are less effective than those used abroad.

Sympathy protests were held overseas, and foreign governments have called on Beijing for restraint.

Asked about the protests at a Monday briefing, White House National Security Council spokesperson John Kirby said that “obviously, there are people in China that have concerns about that,” referring to lockdowns.

“These protesters are speaking for themselves,” Kirby said. “What we are doing is making it clear that we support the right of peaceful protest.”

Asked about criticism of the crackdown, a Foreign Ministry spokesman defended Beijing’s anti-virus strategy and said the public’s legal rights were protected by law.

The government is trying to “provide maximum protection to people’s lives and health while minimizing the COVID impact on social and economic development,” said Zhao Lijian.

Wang Dan, a former student leader of the 1989 demonstrations who now lives in exile, called the protests “an important harbinger for Xi Jinping’s third term in power. It means that he will encounter many challenges in the next five years.”

“This protest symbolizes the beginning of a new era in China … in which Chinese civil society has decided not to be silent and to confront tyranny,” Wang said at a Taipei news conference, warning that the authorities were likely to respond with “stronger force to violently suppress protesters.”