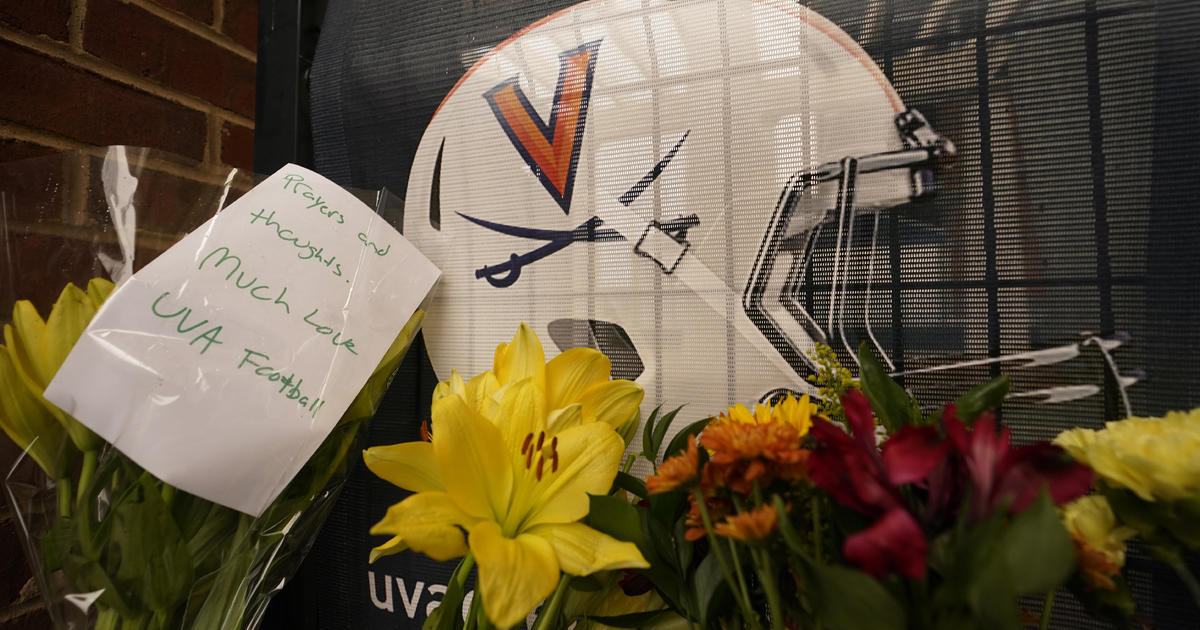 University of Virginia head football coach Tony Elliott and athletics director Carla Williams held back tears as they spoke about the outpouring of support the school has received and how team members are healing following the shooting deaths of three football players on Sunday night.

“It feels like it’s a nightmare, to be honest with you. I’m ready for somebody to pinch me and wake me up and say this didn’t happen,” Elliott told reporters at a Tuesday press conference.

College sophomore Devin Chandler, junior Lavel Davis Jr. and senior D’Sean Perry were killed in the shooting on a bus that was “full of students” returning from a field trip, officials said. They were also beloved members of the UVA football team, playing as wide receivers and linebacker, respectively. Two other students were injured in the shooting.

The 22-year-old suspect in the shooting has since been arrested and charged with three counts of second-degree murder and three counts of using a handgun in the commission of a felony.

Elliott said that team members are relying on each other to navigate the tragedy.

“The approach with the team, once we were given the clear to communicate, we immediately got the team together and just started the process of grieving together and fellowshipping, and trying to make sure that nobody was isolated, that everybody was together,” he said Tuesday. “We pulled all the resources that we could from a counseling standpoint to give these young men the support that they need.”

Elliott said that after the initial shock, the team seems to now be slowly recovering from the tragedy.

“The first meeting was really, really tough,” Elliot said as he fought back tears. “Today was much better, we were able to transition from pain to finding a little bit of joy in celebrating the lives of Lavel, D’Sean, and Devin, and so today we started how probably the last two days have started, but it ended a lot better and I think that the guys are on the road to healing but it’s going to take some time and our approach is to keep them together as much as we possibly can.”

Athletics director Carla Williams told reporters that a decision has not yet been made about whether the team will play its scheduled game against Coastal Carolina on Saturday, but said an announcement will be made soon.

“It will be a discussion with coach and the team,” Williams said. “Obviously, they’re going through a lot. And we want to make sure they’re involved as well. We’ll use our best judgment.”

University of Virginia associate professor of media studies and American studies Jack Hamilton says he taught Chandler in the spring and Davis this semester. He said he is “indescribably sad” in the wake of their deaths, and shared memories of the two students on Twitter.

Chandler, he said, was a transfer student who was in Hamilton’s large lecture class, but would always make a point to go to Hamilton’s office for insight about life at UVA. Later, Hamilton helped him decide his major – American studies, “which he was really excited about.”

“He was an unbelievably nice person, always a huge smile, really gregarious and funny,” Hamilton said. “One of those people who’s just impossible not to like. It is so sad and enraging that he is gone.”

Davis, though quieter than Chandler in Hamilton’s experience, was equally as nice of a person, he said.

“After our first day of class this semester, he made a point to come up and shake my hand and told me I should call him Vel,” Hamilton said.

Chandler, or Vel, would “go out of his way” to make friends with students in the class who weren’t fellow athletes, Hamilton said, adding that he was struck by “how much his classmates liked him and vice versa.”

“I am just stunned and devastated and completely at a loss but wanted to say all this because they were great people with truly limitless futures and they should still be here,” Hamilton said. “It breaks my heart.”