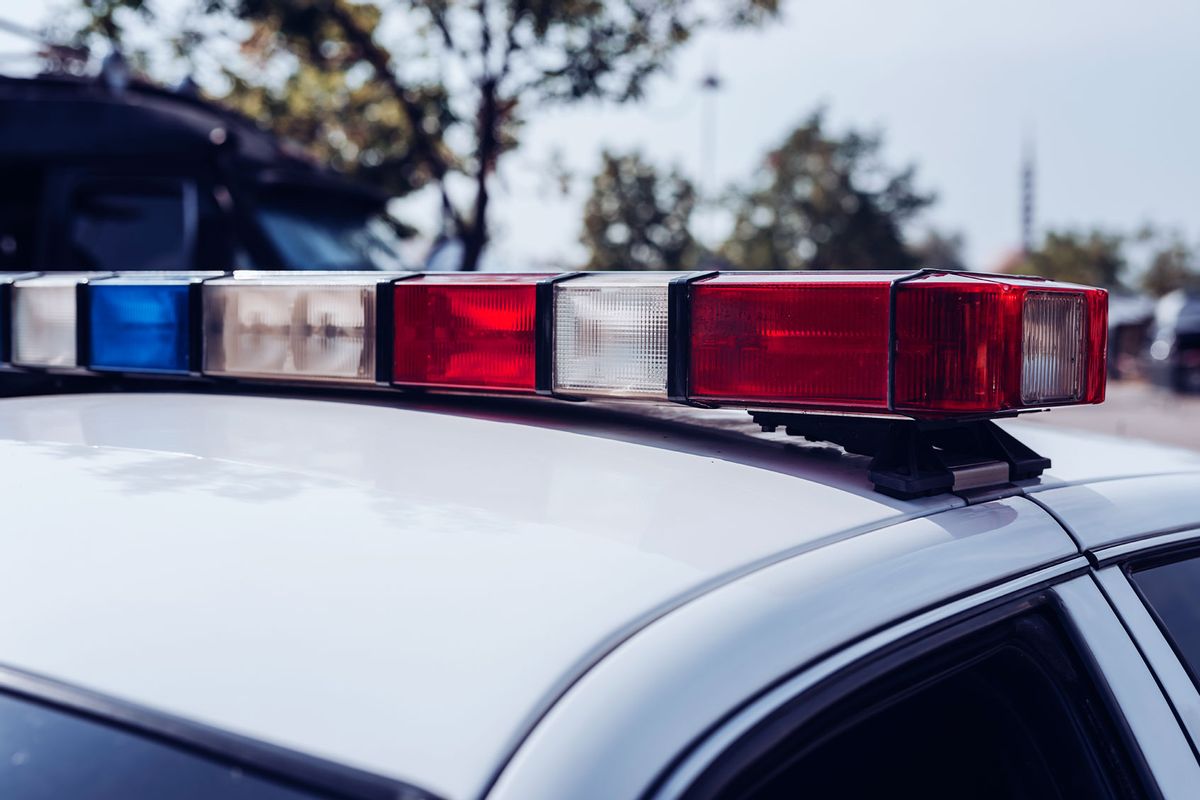 I was 16 years old, I was white, and I was drunk in the back of a police car. The radio squawked. But I was silent.

I had spent the rainy day with a couple buddies drinking beer and that afternoon, when the car in front of me stopped at a yellow light, my car didn’t, and I crashed into it.

The driver of that car was an elderly Black man. He didn’t seem to be hurt, but my old Volkswagen bug was wrapped around his bumper, and the sheriff’s deputy knew I had been drinking. I was in big trouble.

Then, the driver’s window of the sheriff’s car darkened with the shadow of someone standing there, rapping against the glass. It was my grandfather, who asked for a moment alone with the deputy, whom he knew. A few minutes later, the deputy said he would write up the accident as driving too fast for conditions.

My grandfather was not unique in possessing the power he had as a wealthy, white man in Greenville, South Carolina. We called it the Good Ole Boy System, but it was, in fact, a web of white men looking out for each other. Nor was that system unique to Greenville. Though my family had nowhere near as much money or power as the Murdough family in Beaufort County, SC, the viral unraveling of the impunity surrounding that family’s viral saga makes it clear how smoothly the system functioned — up to a certain point — in other times and places.

In that moment, I didn’t think of myself as a racist. I wasn’t actively trying to harm the Black driver. I held no personal animus against him and yet I was participating in white supremacy. All it required was my silence and my feigned ignorance and I was happy to oblige. I didn’t like talking about my whiteness but I was happy to partake of its privileges.  But that moment stuck with me, because I couldn’t help but realize that race played a significant role in the way an encounter played out.

I didn’t like talking about my whiteness but I was happy to partake of its privileges.

From the earliest days of the Carolina colony until well after the passage of the Civil Rights Act, white South Carolinians openly espoused white supremacy and obsessed over their whiteness and the privileges attendant upon it. Even into the 1960s when my parents were teenagers, every public door they walked through was labeled “white.”

The apartheid segregation of the South ended after the upheavals following the passage of the Civil Rights Act, but a new strategy of whiteness emerged. In order to preserve as much white power as possible, white people essentially agreed not to talk about whiteness anymore.

RELATED: White America’s “hidden wound” threatens to destroy the country — and not for the first time

Lee Atwater, a South Carolina native and Republican strategist, explained in a 1981 interview, how open discussions of white power got coded into more abstract, systemic principles.

In other words, if you didn’t talk about whiteness the privileges that had been amassed for white people over centuries could not be criticized or dismantled and could continue to exercise its racial hierarchy, unremarked upon.

I was born in the 1970s and for most of my life, the primary experience of whiteness was not having to think about race at all.

Numerous scholars, including Nell Irvin Painter and Ibram X. Kendi, have shown that there is no idea of whiteness without white supremacy. Whiteness was a conspiracy to value European descent, codified in part by skin color, but also according to the stringent “one drop” rule which even the Nazis found extreme, into a system of power and subjugation.

Of the British colonies that later became the United States, Carolina was at the forefront of crafting and legislating this hierarchy. By 1708 — a short time after some of my ancestors first arrived there — the colony was majority African and the Anglo minority set up increasingly stringent definitions of the “races” and their duties, freedoms, and responsibilities.

For most of my life, the primary experience of whiteness was not having to think about race at all.

The Negro Code of 1740, which was passed into law after a rebellion of enslaved Africans around Stono Creek, solidified and exported to the rest of the slave states the fabricated hierarchy based on race, with an even more rigidly totalitarian system where the small minority used extreme violence to extract absolute value and exert absolute control over the majority population.

The Negro Code was also a white code, legislating the way that white men must act in relation to those they enslaved, fining whites for “failing to whip unruly slaves,” as scholar Peter Wood puts it in his book Black Majority.

Similarly, the colony fined any plantation that did not have at least one white for every ten enslaved people–and used the fines to strengthen the slave patrols, to which many have traced the origins of our modern police forces. From the very creation of whiteness, whites have been worried about some “great replacement,” which could justify extreme violence.

In effect, the “slave codes” of South Carolina created a system of law which, to borrow a phrase from Frank Wilhoit, was intended to bind Black people without protecting them and protect white people without binding them (except when they threatened white rule as a whole).

RELATED: The Black Codes never went away — they just became the “Black Tax”

Despite some advances in the way the culture views the plight of those enslaved on the concentration camp plantation sites in recent years, white people have done very little to ask what living amidst such horror did to our ancestors on a moral and psychological level–and how much of that they passed on to us.

The grandfather who got me out of my bind was not the product of slavers. He grew up poor in a mill village on the outskirts of town for which he was derided as a “linthead,” as the mill-workers were derogatorily called. Nevertheless, he had been white in a Jim Crow regime during America’s post-war boom — and he had made the most of it. The deed to the house he bought in 1947 contained a racial covenant.

By the 1980s, he seemed to know every cop, judge, and lawyer in town. He was always helping friends and family members “fix” a ticket or get into somewhere free. In many ways, his greatest joy came in the demonstration of his white male privilege. It formed his idea of his place in the world — and that place went back to the “slave codes.”

The logic established by those laws have informed the ways white people move about the world. When I crashed my car, the deputy, my grandfather, and I were all ensuring that the law protected me without binding me, while it bound the Black driver without protecting him. Just as our skin is the place where our body intersects with the world, our whiteness is where our experience of the world is shaped by power. That power is now mostly invisible, but when it is thwarted, it erupts as violence.

In 2015 a young white man who had been radicalized by white supremacist websites, drove to Charleston, which had been the heart of the totalitarian slave regime that dominated South Carolina for centuries, and murdered nine parishioners in a church at the heart of the city’s Black community, in the name of whiteness.

When I read about these murders, I felt like I could finally see how whiteness worked. Everything I had repressed, the shame and ignominy, the miasma of whiteness had returned in the form of fury. In that moment, I realized that whiteness was something that must be reckoned with.

Whiteness only exists as a way to exercise power. It is part of America’s conspiratorial agreement on what matters and what counts as success, including the color of our skin. And like most conspiracies, it contains elements of both silence and violence, which work together and feed into each other.

We can’t be “colorblind” or “post-racial” and simply ignore the power structures we have inherited without participating in the conspiracy. We have to dismantle them.

The backlash against “CRT” and the 1619 Project have shown how powerful it can be simply to name whiteness and outline the way it uses power. The fact that so many prominent white people are scared of discussions of whiteness shows the value of the conversations.

White people are not being replaced. But whiteness needs to be abolished.

We can’t legislate the conversation away. Anti-CRT laws and bills banning books will push the discussions of whiteness back underground where kids like Dylann Roof or Payton Gendron, who allegedly killed 10 Black shoppers at a grocery store in Buffalo last month, will find hundreds of sites ready to play on their confusion and turn them from silence to violence.

We can’t pretend to be perfect, condemning others as if racism hasn’t affected our thinking. We need to be open about our own mistakes, we need to seek to repair, we need to address and confront the horrors that have created our history and our psyches.

White people are not being replaced. But whiteness needs to be abolished. In the same way that prison abolition involves a grand reconsideration of categories and priorities, the abolition of whiteness will not happen overnight. But we need to work toward it, even though we will sometimes be wrong. We need to acknowledge what whiteness does and what it has done in our own lives; we need to begin the process of reparations; and we need to fight against our own power, as white people.

This should feel liberatory. We can struggle to be free from a system of brutality that relies on our complicity. It is not about feeling guilty for the past, but rather eradicating its effects on our own actions.

I know that part of my character was formed in my acquiescence to an obvious injustice on the day of the crash and I know that I am worse off for it. And though I have no way to find the driver I crashed into — and though that is far from the worst thing I’ve done — I know that I didn’t have to personally be around in “slavery times,” as I’ve heard my family call it, to owe some reparations.