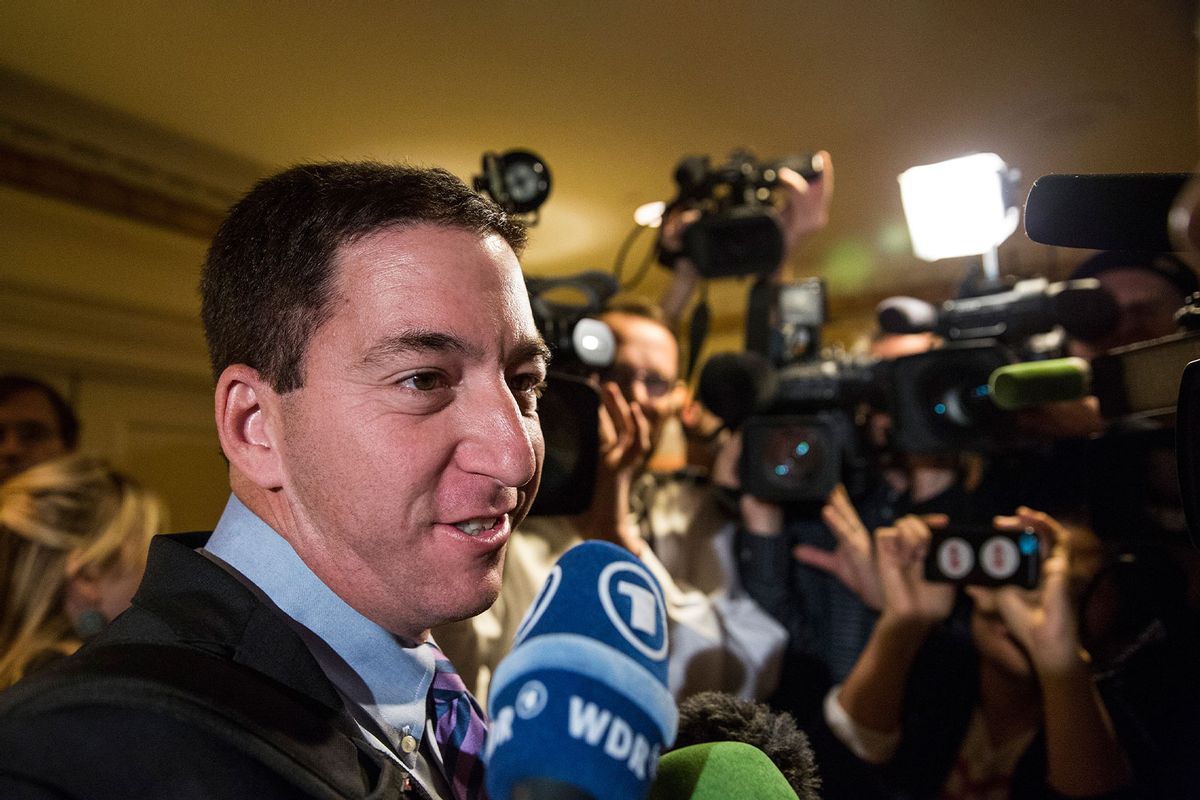 In 2022, Pride month — June — gave way to an explosion of invective against LGBTQ rights, helped along by allies in right-wing media, particularly Fox News. But there’s also rising anti-trans sentiment in the liberal-left sphere, and it’s being driven by some elements of what might be called the “post-left,” onetime champions of progressive outlooks who have now tilted to the right. Former Intercept writer (and Salon columnist) Glenn Greenwald is one of those leading the charge, turning his audience on to fringe elements of a growing hate movement.

It wasn’t always like this. Greenwald was once a stalwart defender of trans rights — perhaps in connection with his advocacy for U.S. Army whistleblower Chelsea Manning and his friendship with since-assassinated Brazilian politician and activist Marielle Franco. “If you want to get a taste for how widespread warped & creepy hostility against trans people is, mention Chelsea Manning & survey the bile,” Greenwald tweeted on Sept. 10, 2016.

In 2017, Greenwald called Milo Yiannopoulos’ notorious appearance on Bill Maher’s show “the most trans-hating discussion I’ve seen on television.” He referred to Maher’s attacks on trans people in general as indicative of a complex of  “thinking you’re brave & subversive for mocking the most marginalized, while reliably sycophantic to actual power.”

Greenwald recognized the extent of anti-trans bigotry and the dangers it posed in the U.K. at least as recently as June 2020. That month, he celebrated an article at the now-shuttered outlet the Outline wondering why British media had become so transphobic and said Harry Potter author and anti-trans advocate J.K. Rowling’s “victimhood complex is suffocating & narcissistic.”

In March 2017, Greenwald urged his audience to follow ACLU lawyer Chase Strangio for Trans Day of Visibility, as well as out lesbian tennis star Martina Navratilova — because she had a trans coach. Today, Greenwald expresses great hostility toward Strangio, and cites Navratilova’s skeptical comments on trans people as evidence of her courage and strength rather than exclusionary bigotry. “In 2019, Martina Navratilova was *expelled* by LGBT groups for questioning the fairness of trans women competing in the professional women’s sports leagues she helped build,” he tweeted on June 17, 2021, in a typical post that walked up to the line of endorsing the comments while giving himself an out.

Last fall, Manning directly addressed the person Greenwald has become, telling her onetime champion that she was “terrified” of him. “You’re greedy, unprincipled, and I’m embarrassed for ever considering you a friend,” Manning said. In response, Greenwald released private chat records showing Manning’s messages to him when she was feeling depressed.

Last fall, Chelsea Manning directly addressed the person Greenwald has become, saying she was “terrified” of him: “You’re greedy, unprincipled, and I’m embarrassed for ever considering you a friend.”

How did this happen? One might date Greenwald’s coming out as transphobic — or at least trans-skeptical — to a video interview he did with anti-trans media figure Katie Herzog in March 2021. During the conversation, the pair talked about how trans people, in their view, were taking up more than their share of a presumably limited amount of civil rights. “The minute you declare yourself nonbinary or trans,” Greenwald declared, “you catapult up the ladder of oppression that absolutely confers concrete benefits.”

A zero-sum view of civil rights doesn’t easily allow for solidarity between marginalized groups. But Greenwald’s shift on trans rights has also coincided with his tilt toward the far right in recent years. While Greenwald has long had a friendly relationship with extremist Fox News host Tucker Carlson, he’s gone further and further down a conservative media rabbit hole since leaving The Intercept in late 2020. It would have once been nearly unthinkable to imagine Greenwald chumming it up onstage with the likes of social conservative Erick Erickson or giving a softball interview to notoriously homophobic conspiracy theorist Alex Jones — but both of those things have happened. Perhaps cultivating a new audience of right-wing media consumers has pushed Greenwald to embrace social conservatism and bigotry against trans people.

Greenwald recently laid out his view of the trans rights movement on June 23 during an appearance on the Vanguard YouTube show. In response to a question about his engagement in multiple culture-war issues, almost invariably on the side of the political right, Greenwald claimed that he was just asking questions about “what has become of the trans agenda.”

“I know you get accused, if you say they’re legitimate questions, of, like, empowering hatred against trans people,” Greenwald continued, “which I think is incredibly an intellectually dishonest way to coerce and bully people, to accept your views that ‘if you don’t immediately accept all of my newfound promises about this new ideology I’m trying to get society to embrace that radically changes so many things about how we think about gender and sex and how we organize society.'”

A week later on an edition of his video streaming show on June 30 — during which he interviewed Christopher Rufo, the hard-right intellectual force behind the panic over “critical race theory,” who has now set his sights on LGBTQ rights — Greenwald questioned “this new agenda of trans issues like, you know, demanding everybody say trans women are women.” Rufo has made little secret of his intentions to propagandize against the LGBTQ community, laying out part of the strategy in a June 17 tweet in which he suggested that “Conservatives should start using the phrase ‘trans stripper’ in lieu of ‘drag queen'” because “it has a more lurid set of connotations and shifts the debate to sexualization.”

During his congenial, unchallenging discussion with Rufo, Greenwald pegged the beginning of the trans rights movement to the end of the same-sex marriage fight, saying that the push for trans civil rights was a byproduct of winning that battle. Faced with either going home victorious but unemployed or pivoting to a new fight, according to Greenwald’s version of events, equality activists chose to keep the spigot of cash flowing. “Instead, they immediately switched to the trans movement, which they barely had talked about before, because there was nothing else for them to do,” Greenwald said — connecting to the zero-sum civil rights argument he made with Herzog over a year earlier.

The mean-spirited comments were notable, perhaps, but they’re no longer particularly novel. Greenwald has been lobbing insults and attacks at trans people and trans advocates for well over a year.

His defense of the “Libs of TikTok” account — after Washington Post reporter Taylor Lorenz dug into who was behind the social-media screen and using their platform to go after teachers and others for adopting accepting language toward LGBTQ people — was that LoTT was targeted as a “real enemy” of corporate journalism and a group of “citizens with the wrong politics.” Greenwald made championing the LoTT account a point of pride, boasting at one point that he was its “godfather,” despite the fact that it has helped drive the recent spate of street violence and legislative restrictions against queer people.

At times, Greenwald affects concern for transitioning people who, he contended in May 2021, were at risk from “life-altering hormones and surgeries.” Yet Greenwald’s brand of anti-trans activist journalism could well lead to violence, even if that’s not his intent. Media Matters LGBTQ program director Ari Drennen described on my podcast a “permission structure” created by major media and political figures for violence against marginalized communities. We saw the results of that permission structure as attacks on Pride events around the country increased in number and ferocity this year. An ongoing legislative assault at the state level, particularly though not exclusively in Florida, has added to the siege.

Earlier this year, journalist and commentator Katelyn Burns told me that some of those on the right who would prefer not to be tarred by the same brush as their allies in the anti-trans movement have pulled back slightly from the consequences of their rhetoric, particularly as legislatures in states like Florida have accelerated their attacks on trans people and also have gone after gay and lesbian Americans.

“All of a sudden they’re concerned about the rhetoric and, well, you started this,” Burns said. “You guys were the foundation for bringing moderates into the anti-trans movement, and now you’re getting upset that it’s turned against you. Trans people have been over here telling you this is what was going to happen.”

But Greenwald doesn’t seem to care about the consequences of his rhetoric about trans people — commentaries that have become a hateful refrain aimed at a marginalized community under increasing attack.

about the assault on LGBTQ rights