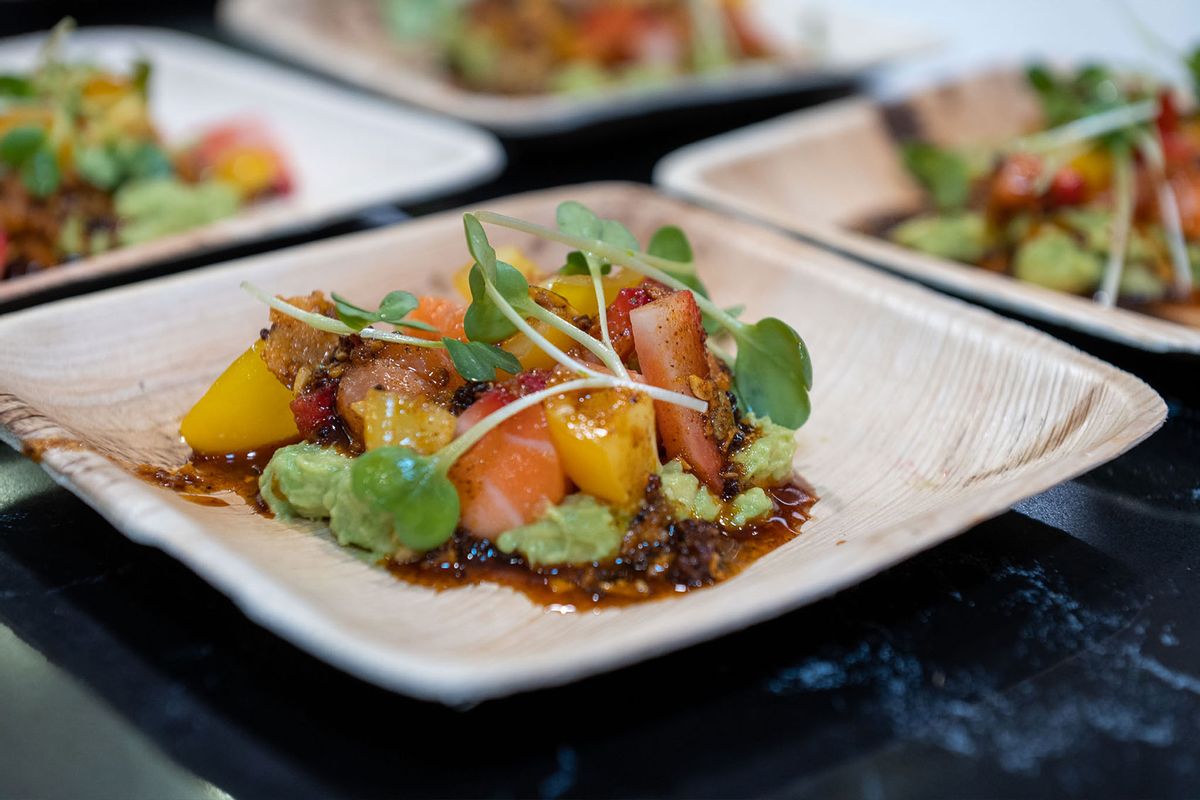 Caroline Nguyen grew up in a household in which a few pinches of monosodium glutamate (MSG) factored into practically everything her mom cooked.

“I’ve always enjoyed watching her cook and learning from her,” said the Vietnamese-American chef/owner of Revolution Taco in Philadelphia. “Growing up, she’d show me, ‘add a little pinch of this and that, and don’t forget the MSG!’ She pretty much added it to everything from stewed dishes to pho, which she made every Sunday.”

Whenever Nguyen cooks at home, she hears her mom’s words in her head, coaxing her to sprinkle in a pinch of MSG for umami and balance. Yet she’s expressly avoided using the flavor enhancer at all throughout her professional cooking life — starting with food trucks like Street Food Philly and Taco Mondo through Revolution Taco, her brick-and-mortar restaurant featuring globally-inspired tacos, which she opened in 2016.

“Often when customers would see I’m of Asian descent, they would automatically ask me if there was MSG in the food.”

“I started out with a food truck, which obviously involves a lot of customer-facing time,” she said. “Often when customers would see I’m of Asian descent, they would automatically ask me if there was MSG in the food. It still happens a lot, because, like, there’s still a lot of people out there that think MSG is bad for you. It doesn’t matter that it’s in everything from potato chips to canned food. There’s been a bad stigma attached to people of Asian descent [when it comes to] MSG.”

In fact, as of 2019 some 42 percent of Americans still said they believe MSG is bad for them — linked to health problems including headaches, palpitations, allergic reactions and even infantile obesity. This persists in spite of a cascade of scientific evidence to the contrary.

“You know, I think the unconscious bias and stereotypes reinforced in our culture, whether through media or the people you hang out with, it’s powerful,” said Taiwanese-American comedian, actress and activist Jenny Yang. “People sometimes don’t even understand that the negative perceptions of MSG might be associated with this kind of, for lack of a better term, racist propaganda that was very unscientific and that originated this idea.”

MSG is defined by the Food and Drug Administration as the “sodium salt of the common amino acid glutamic acid.” It was discovered more than 100 years ago by a Japanese chemist named Kikunae Ikeda, who wondered why his wife’s tofu and vegetable soup had such a deep, almost meaty flavor. When she explained it was because of the soup’s kombu (seaweed) broth, he reduced some all the way down to a crystalline powder — yielding monosodium glutamate. Glutamic acid, or glutamate, occurs naturally in all kinds of foods, from mushrooms to tomatoes, dry-aged meat, soy sauce and Parmesan. The average person eats 13 grams of naturally occurring glutamates each day, while glutamate intake from using MSG as an additive averages out to just over half a gram per day. (By the way, your body processes synthetic MSG the same way it processes natural glutamates.)

Modern synthetic MSG is made by fermenting starch, sugar beets, sugar cane, or molasses. By itself, it tastes a little like salted, dehydrated meat. But in Doritos, instant ramen and bottled ranch dressing, it’s that savory umami flavor that makes us say “Mmmm!” and keep going back for more. That’s because its presence signals umami, aka the fifth taste.

“Umami is one of the five basic tastes” alongside sweet, sour, salty and bitter,” said Christopher Koetke, executive chef of MSG producer Ajinomoto and 40-year culinary industry vet. “This means, essentially, that each one of those basic tastes has to be at a level where it needs to be to make food delicious. And it’s fascinating, because chefs and cooks and people have always cooked with a sense of umami in mind even though they didn’t understand it consciously, because we’re drawn to it.” 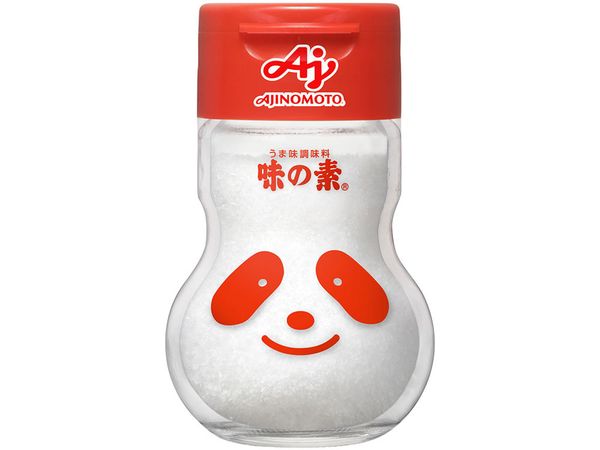 Indeed, from French brown sauces to fish sauce to garum, the precursor to ketchup that graced tables of households in the Roman empire, umami has been around as long as people have cooked and fermented their food. The demonization of MSG in America began in 1968, when a Maryland doctor wrote a letter to the New England Journal of Medicine, in which he described experiencing symptoms similar to an allergic reaction every time he ate food from a Chinese restaurant. The unfounded claim, which he summarized as “Chinese Restaurant Syndrome,” prompted others to write in with their own experiences feeling flushed or getting headaches after consuming Chinese food. Shortly thereafter, the New York Times published a story citing MSG as responsible for symptoms people experienced after eating Chinese food; in 1993 “Chinese Restaurant Syndrome” even took up official residence in the Merriam-Webster dictionary. (It has since been revised, thanks in part to lobbying by Ajinomoto.)

Koetke admits that his own glutamate epiphany came later than it should have largely because he hadn’t questioned lingering misperceptions. While teaching a culinary arts lecture on advanced charcuterie at Kendall College in Chicago over 20 years ago, he rattled off MSG among “a bunch of additives we are not going to use,” he said. “There was a Filipino student in my class, and I caught the look on her face when I said that — just total confusion. After class, she said, ‘Chef, what’s wrong with MSG?’ This is not an example of good teaching, but I didn’t actually know; I was repeating what I’d heard.”

She cooked him a plate of scrambled eggs seasoned with salt, pepper and MSG, which he says changed his life.

She cooked him a plate of scrambled eggs seasoned with salt, pepper and MSG, which he says changed his life. He now works with Ajinomoto to educate chefs through events like a recent MSG immersion event at Ajinomoto’s Itasca, Illinois, headquarters, where they cooked and compared dishes made with and without MSG. What excited Koetke in the Kendall kitchens all those years ago is finally resonating with more chefs who are connecting the science to the art.

“I don’t fault chefs for not knowing,” he said. “Umami wasn’t proven the fifth taste till 2002 — so it’s still relatively new. Many of us grew up never understanding umami. Chefs aren’t just rediscovering it, but are better understanding what it is — that the glutamate in MSG is exactly the same amino acid as that in Parmesan cheese.”

Max Robbins, culinary director at Chicago-based restaurant group Lettuce Entertain You and veteran chef of such restaurants as Longman & Eagle and Blackbird (RIP), considers MSG a powerful tool in chefs’ arsenals for increasing savoriness in everything from vinaigrettes to vegetables and meat. Whether he deploys it via fish sauce, shiro dashi, anchovies, pork floss, Parm, chicken bouillon, or a few well-placed shakes of MSG, he deems it essential to his penchant for “mixing really classic, simple techniques with the nostalgic flavors of childhood for something that’s unmatched.”

He hasn’t taken pains to vocalize his use of the additive, chiefly because he sees no reason to. “If menus don’t have to include notes about dishes containing like, 3,000 calories in butter or a crazy amount of sodium — things that are actually harmful, in other words — why would we notate something with no proven negative effects?”

And yet, armed with the knowledge of how pervasive misinformation about MSG remains, Robbins wondered aloud if he should do more on the consumer education side to prevent the trauma from continuing, which overwhelmingly affects Asian Americans. (At least one Asian-American chef I contacted refused to talk about it because of the negative connotations.)

“Why have we collectively as a food community not felt the need to break down these myths as we lean into use of this product? People have no problem doing Alsatian wine dinners to educate people about grape production. Why not do the same thing for ingredients?”

He thinks that it’s important for big food conglomerates with the resources to support causes to take a lead, rather than putting so much onus on micro-economies. As of publishing, Frito-Lay hadn’t yet responded to emails asking why they continue to market and label a line of snacks made without MSG when it’s not considered an allergen. (The site verbiage explains that “some people report sensitivity.”)

Yang agrees that everyone from chefs to influencers to food scientists to packaged food producers to consumers themselves all bear responsibility “for whatever influence or platform they have, you know?” she said. “People need to be informed, sure, but let’s not sway them according to prejudice that is not real, and not based on scientific evidence.” 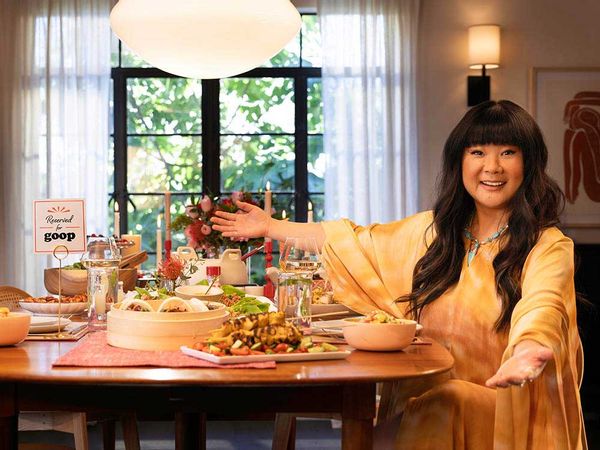 Actress and activist Jenny Yang at an MSG-themed dinner (Photo courtesy of ﻿Ajinomoto)When we spoke, Yang was awaiting a response from Gwyneth Paltrow, actress and creator of wellness company Goop, to a dinner date featuring MSG as the star flavoring and a conversation to set the record straight on the additive. Yang launched the #DinnerwithGoop campaign, in partnership with Ajinomoto, via an Instagram post in June. In it, she talks about the power of Goop in her hometown of L.A., cheekily referencing some of its more — ahem — unique beauty treatments, like oil pulling and red light therapy. She calls the site out for unfairly pegging MSG as “unclean,” despite a stack of scientific evidence proving that it’s safe.

“I’m all for clean eating, I just want to make sure it’s informed by science,” she said in the video. “Otherwise, who gets to decide what’s ‘clean’? Is my grandma’s famous red-braised pork belly somehow less clean than your grandma’s chicken pot pie?”

It’s dangerous for a lifestyle site with over 8 million subscribers, “many of whom follow its advice to a tee without critical thinking,” to be exposed to false information, especially the kind that that comes with xenophobic and racist baggage, Yang said. Since the campaign rollout, Ajinomoto says that Goop has removed some of its problematic MSG articles, but Yang thinks the most change will come through hearing from the Goop goddess herself.

“Number one, I would love to have dinner with Gwyneth — delicious MSG food — and shoot a video of her being like, ‘hey thanks for calling me in! I didn’t know we were contributing to the perpetuation of the idea that MSG is a terrible thing for you. I’ve been educated,'” Yang said.

She continued: “In addition to scrubbing articles from the site … I’d love for them to affirmatively feature a conversation to educate people. Food is a universal language, flavors are universal, the most accessible and relatable thing. That’s why to me it is so important to clarify things about the food of my culture; that’s an entry point for also clarifying who I am in my identity.”

But one conversation had already made an impact. Simply by talking about MSG had emboldened Nguyen to reconsider adding it to her full-service dinner and brunch menus. She knew it would lend balance and umami to her Korean barbecue and sweet-and-sour chicken; moreover she figured its mere presence may help educate those who weren’t sure why they were avoiding it in the first place.

“Maybe more of the foodie people know it’s not bad for you by now,” she said. “The more everyone else sees and tastes it, the more common it becomes.” She paused briefly, “even though it’s in pretty much everything.”