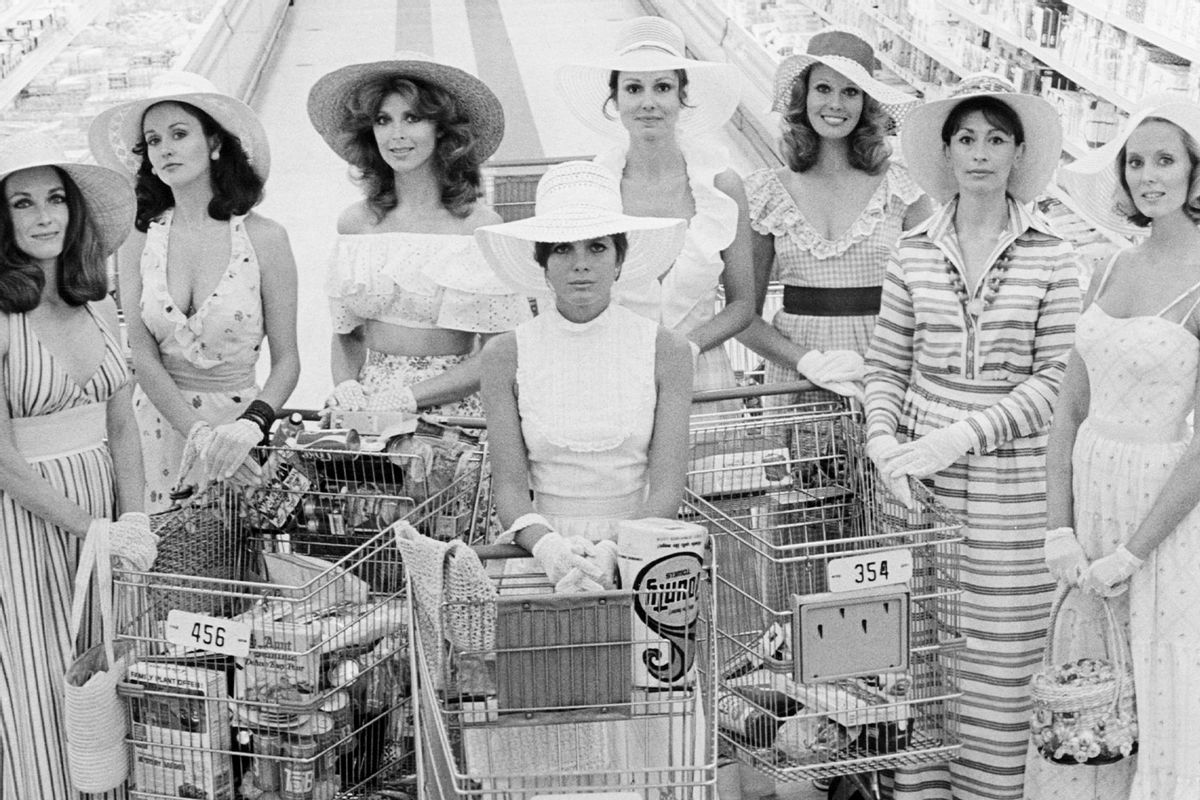 The Women’s Liberation Movement wanted many things in 1970, but one of the most important was freedom from “unpaid domestic servitude at home.”

Half a century later, most women are still waiting for their freedom. Women still do far more domestic and care labour than men.

Since the 1960s, more and more women have taken up paid employment, but a problem remains: how would their unpaid domestic work be replaced?

“The Stepford Wives” begins with Joanna Eberhart, a wife, mother and photographer, who moves with her family from Manhattan to the suburban town of Stepford. She is interested in tennis, photography and women’s liberation. Joanna and her husband Walter have a happy, respectful marriage. Yet Walter joins the mysterious Stepford Men’s Association, where the men of the town spend their evenings.

Joanna finds it hard to make friends in their new home: all the women of Stepford are too busy cooking and cleaning. In the 1975 film adaptation (directed by Bryan Forbes, with a screenplay by William Goldman), Joanna and her only friend, fellow newcomer Bobbie, begin a consciousness-raising group – designed to raise women’s feminist awareness – which is derailed by an intense discussion of the merits of Easy-On Spray Starch.

The women of Stepford transform into glassy-eyed housewives within months of arriving. Watching one of them admiring her washing, “like an actress in a commercial,” Joanna thinks: “That’s what they all were, all the Stepford wives: actresses in commercials, pleased with detergents and floor wax, with cleansers, shampoos, and deodorants. Pretty actresses, big in the bosom but small in the talent, playing suburban housewives unconvincingly, too nicey-nice to be real.”

Joanna and Bobbie realize, with mounting horror, that the Stepford women have literally been replaced by robots, in a scheme masterminded by their husbands – and they too, will be similarly transformed. Bobbie is first. She tells Joanna:

“I realized I was being awfully sloppy and self-indulgent. [. . . ] I’ve decided to do my job conscientiously, the way Dave does his.”

The women’s personalities have been erased, but their families don’t seem to mind – Bobbie’s son is delighted because his mother now makes hot breakfasts, while the husbands are thrilled because their “new” wives love sex and housework.

Fearful that she “won’t be me next summer,” Joanne realizes Walter has also changed. He tells her the women of Stepford have changed only “because they realized they’d been lazy and negligent [. . .] It wouldn’t hurt you to look in a mirror once in a while.”

Joanna agrees to see a psychiatrist, who prescribes her a sedative. But soon after, her voice vanishes from the novel, as she too has been transformed. At the story’s close, Joanna is gliding slowly through a supermarket, telling an acquaintance that she no longer does photography because “housework’s enough for me.”

“The Stepford Wives” is an extraordinary feminist horror novel. Its vision of a group of men who engineer housework-loving robots to replace their restless wives offered not only a satire of male fears of women’s liberation, but a savage view of heterosexual marriage. In this telling, a man would rather kill his wife and replace her with a robot than commit to equality and recognize her as a whole person.

Sarah Marshall, co-host of the podcast “You’re Wrong About,” argued the novel dramatized a real problem of the 1960s and 1970s: suburban living did transform women into robots. Tranquillizers like valium were massively over-prescribed for women who were suffering from “suburban neurosis,” both in Australia and the U.S.

The extraordinary 1977 Australian documentary “All In The Same Boat” suggested suburban women had to take drugs to cope because their husbands refused to shoulder their share of the burdens of home and family. In short, what was happening to the women of Stepford was happening to women everywhere. They were losing their identities in a sea of endless domestic labor.

Joanna’s bafflement at her neighbors’ absorption in domestic chores echoed the feelings of many women of the era. Betty Friedan’s “The Feminine Mystique” resonated with so many white women in the 1960s because it articulated their dissatisfaction with the postwar gender order. Friedan declared: “we can no longer ignore that voice within women that says: ‘I want something more than my husband and my children and my house.'”

Like many who joined women’s liberation, Joanna also wanted something more. The novel made it clear that “more” would be difficult for many women.

From post-feminism to “Get Out”: cultural influence

It is telling that in post-feminist 2004, the Joanna in the Frank Oz film remake of “The Stepford Wives” is not a woman seeking liberation, but a TV network president who creates crass reality TV programs. Women’s liberation had been transformed into corporate feminism, and the engineer of the scheme was not the Stepford Men’s Association, but an exhausted career woman who wants to return to a “simpler” life. The remake took a feminist premise and made an anti-feminist film.

Despite the dismal failure of the 2004 film, “The Stepford Wives” left a significant cultural footprint. The term itself entered the vernacular. Filmmaker Jordan Peele cited “The Stepford Wives” as a key influence on his horror film “Get Out,” also set in white suburbia. And Alex Garland’s 2014 film “Ex Machina,” centred on a lifelike female robot who turns on her creator, was a biting critique of tech bro misogyny.

In a post-Roe v Wade world, where many men still seek to control women’s bodies and curtail their imaginations, Levin’s novel remains as chilling as ever.