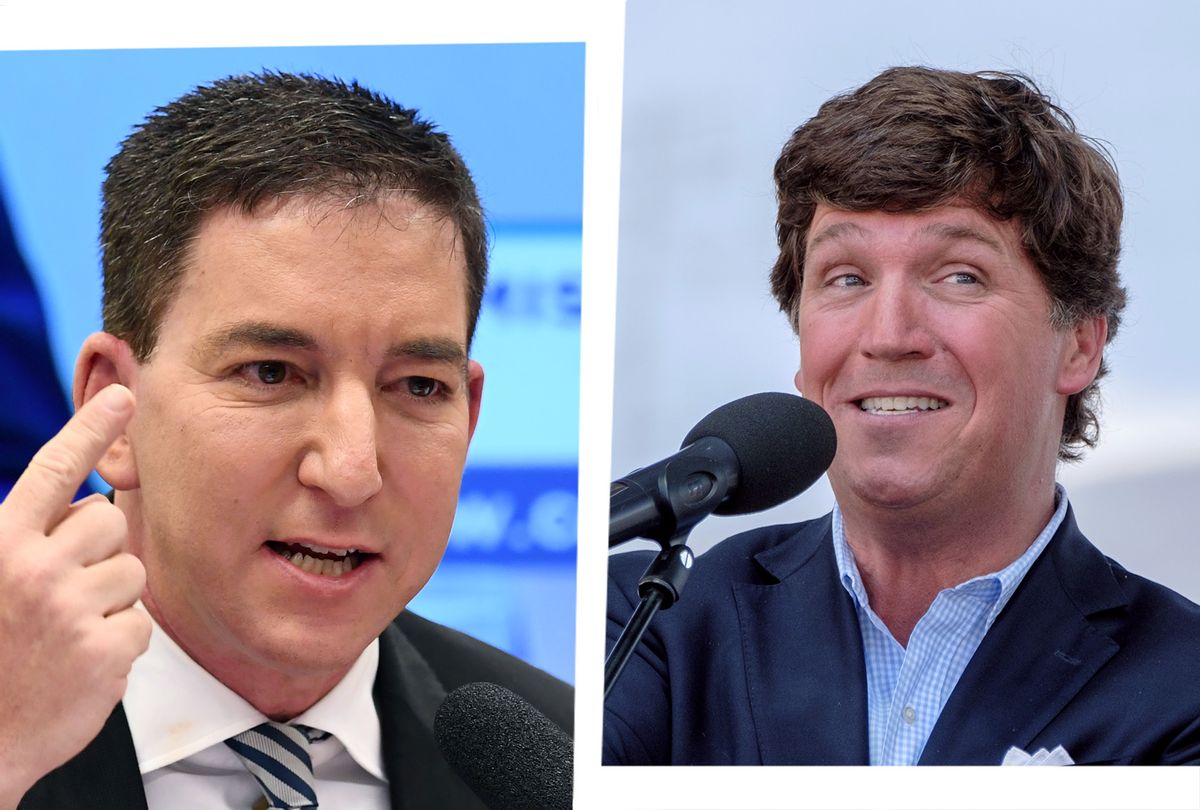 Since Greenwald — a former Salon columnist, and after that a Pulitzer-winning reporter for the Guardian — departed from the Intercept in September 2020, he’s become a stalwart defender of Fox News, and Carlson in particular. As Carlson has gained in viewership and impact — he’s the most widely watched cable news host in the U.S. — his commentary and political positions have come under increased scrutiny. With that attention has come intense criticism. But he has Greenwald in his corner, who has let forth a flood of pro-Carlson arguments, primarily delivered on Twitter, his medium of choice.

The May 14 massacre in Buffalo that left 10 dead has the country looking at Carlson with renewed interest, and not the positive kind. The alleged shooter, 18-year-old Payton Gendron, posted a 180-page manifesto explaining that he targeted the Tops Market grocery store because the neighborhood was majority Black, in an act of political violence aimed at striking fear into nonwhite U.S. residents. Gendron’s ideological outlook was highly influenced by the racist conspiracy theory known as the “Great Replacement,” which holds that whites in the U.S. are being systematically replaced by people of color in a demographic change that’s being masterminded by a cabal of elites.

RELATED: What “great replacement”? Right wants us to shut up about Buffalo shooter’s ideology

That demographic-threat conspiracy theory has been laundered in prime time by none other than Carlson. Using his perch atop cable news rankings, the Fox News host has worked to spread the message of demographic threat far and wide among conservatives. Gendron’s manifesto doesn’t mention Carlson specifically, a point seized on by Greenwald to explain away the connections between the messaging from his favorite cable news host and the shooter. But the ideological through-line is hard to miss.

How precisely is diversity our strength? Since you’ve made this our new national motto, please be specific as you explain it. Can you think, for example, of other institutions, such as, I don’t know, marriage or military units, in which the less people have in common the more cohesive they are? Do you get along better with your neighbors or your co-workers if you can’t understand each other or share no common values?

Here’s Gendron in his manifesto:

What gives a nation strength? And how does diversity increase that strength? What part of diversity causes this increase in strength? No one can give an answer.

Nikki McCann Ramirez, a researcher with Media Matters, noted on my podcast last week that the interconnectedness of right-wing messaging, from neo-Nazi chat boards to Fox News, makes drawing distinctions between Carlson and Gendron somewhat irrelevant.

“The shooter did not cite Tucker Carlson as an inspiration in his manifesto or as a direct source of radicalization — but what I think is important to point out here is that this man was radicalized on online forums,” Ramirez said. “Extremism researchers know that these white nationalist online forums view Carlson as an ally in spreading their messaging to the public.”

Greenwald has been a Fox News partisan for some time, in near-perfect correlation to how often he’s invited on the network. Carlson has hosted Greenwald numerous times, while gaining his unswerving loyalty.

What this loyalty has meant in real terms is relentless pro-Carlson arguments from Greenwald. He has seldom criticized Carlson or Fox News — as I detailed last year — and his deference has paid off with a near-weekly slot appearing on Carlson’s primetime show. (Greenwald challenged me to come on his show and hash out our differences. When I replied with a list of dates and times I could do so, he did not respond.)

Greenwald argues to critics that his appearances on Carlson’s show allow him to get a pro-privacy, anti-war message out to the network’s viewers. Yet more often than not, he’s just on Fox News to talk about Twitter, liberals and some aspect of the culture wars.

Greenwald claims his presence on Fox News might shift at least a few viewers away from rabid right-wing ideology, but his actual appearances serve mainly to support Carlson’s worldview.

For all of Greenwald’s claims that his presence on the show might shift at least a few Fox viewers from rabid right-wing ideologues to something approaching social libertarianism, his actual appearances seem to serve mainly to support Carlson’s worldview. Greenwald doesn’t challenge Carlson’s worldview, seldom if ever criticizes the right and generally stays in his lane — legitimizing the Fox News narrative.

Thus it was unsurprising that after the Buffalo shooting, Greenwald went out of his way to make outlandish defensive claims about that worldview. One of the main points Greenwald has hammered repeatedly is the idea that Carlson is simply reacting to liberals, who are really the folks spreading conspiracy theories.

“The Democrats and their leading [strategists] for years have been arguing that immigration will change the demographic make-up of the country — by replacing conservative voters with more liberal ones — and that this will benefit them politically,” Greenwald tweeted on May 16.

In a lengthy screed on his Substack blog, Greenwald expressed outrage over the very possibility that Carlson’s critics might tie the cable news host’s rhetoric to that of the Buffalo shooter. In particular, Greenwald found the suggestion that Carlson’s worldview was fundamentally racist beyond the pale.

“His anti-immigration and ‘replacement’ argument is aimed at the idea — one that had been long mainstream on the left until about a decade ago — that large, uncontrolled immigration harms American citizens who are already here,” Greenwald said, notably without a citation or, indeed, any evidence. “There is no racial hierarchy in Carlson’s view of American citizenship and to claim that there is is nothing short of a defamatory lie.”

But the very backbone of Carlson’s replacement-theory talk is, in fact, the story of racial hierarchy. Carlson doesn’t just rail at so-called “large, uncontrolled immigration” — he targets immigration as a whole from countries that he finds undesirable. It’s indistinguishable from the conspiracy theories about replacement spouted off by any number of far-right and sometimes overtly white supremacist figures.

Notably, when Greenwald is directly challenged on these points outside Twitter, he’s had difficulty defending his claims. A videotaped debate in late January with a young man named Nicholas provides a good example. Nicholas, who appears to be a teenager or very young adult, challenged Greenwald on his support for Carlson, saying that Greenwald has “never found anything negative to highlight” about the cable news host. Greenwald retorted that questions about the Fox News host were better directed at Carlson, since Greenwald didn’t watch the show. It was a strange admission from one of Carlson’s most fervent defenders.

Arguing that Carlson is free of racism is brazen, even for a provocateur: Carlson called the demonstrations after George Floyd’s murder “an attack on civilization.”

Arguing that Carlson’s ideology is free of racism in spite of overwhelming evidence to the contrary is stunningly brazen, even for a provocateur like Greenwald. In March 2021, after Minneapolis Police Officer Derek Chauvin was found guilty of murdering George Floyd, Carlson complained that mob rule had overtaken legal justice. Finding Chauvin guilty, he argued, was essentially giving up on the rule of law because demonstrations had followed Floyd’s murder. “We must stop this current insanity,” Carlson declared. “It’s an attack on civilization.”

On Sept. 18, 2021, Carlson claimed that President Biden and the Democratic Party were attempting to “change the racial mix of the country.”

“In political terms,” Carlson told his audience, “this policy is called ‘the great replacement,’ the replacement of legacy Americans with more obedient people from far-away countries.”

Yet just months later, on Nov. 22, Greenwald tweeted that “Tucker’s view” was that the Fox News host believes “in a racially equal society.” In a debate with YouTube personality Steven Fritts released less than a week later, Greenwald said that, in his experience, Carlson’s views on race were hard to square with accusations of racism.

“I have never ever, ever, ever heard Tucker frame immigration or any other issue in the racist terms that you attributed to him,” Greenwald told Fritts. “In fact, he believes that what is racist is liberal discourse — the idea that we should judge people based on their race.”

It’s no longer enough to run interference for the Fox host — now, while expressing solidarity with Carlson, Greenwald repeats the same talking points on crime statistics and replacement theory that have been perfected in right-wing messaging.

While Greenwald formerly defended Carlson while distancing himself from the more extreme interpretations of the Fox host’s views, today he is increasingly deploying his Twitter platform in service of spreading the white nationalist message. These vehement defenses of the most influential media purveyor of the racist “replacement” theory are destructive efforts to launder hate by a once-admirable journalist.

Read more on Tucker Carlson, the Buffalo shooting and the “great replacement”: