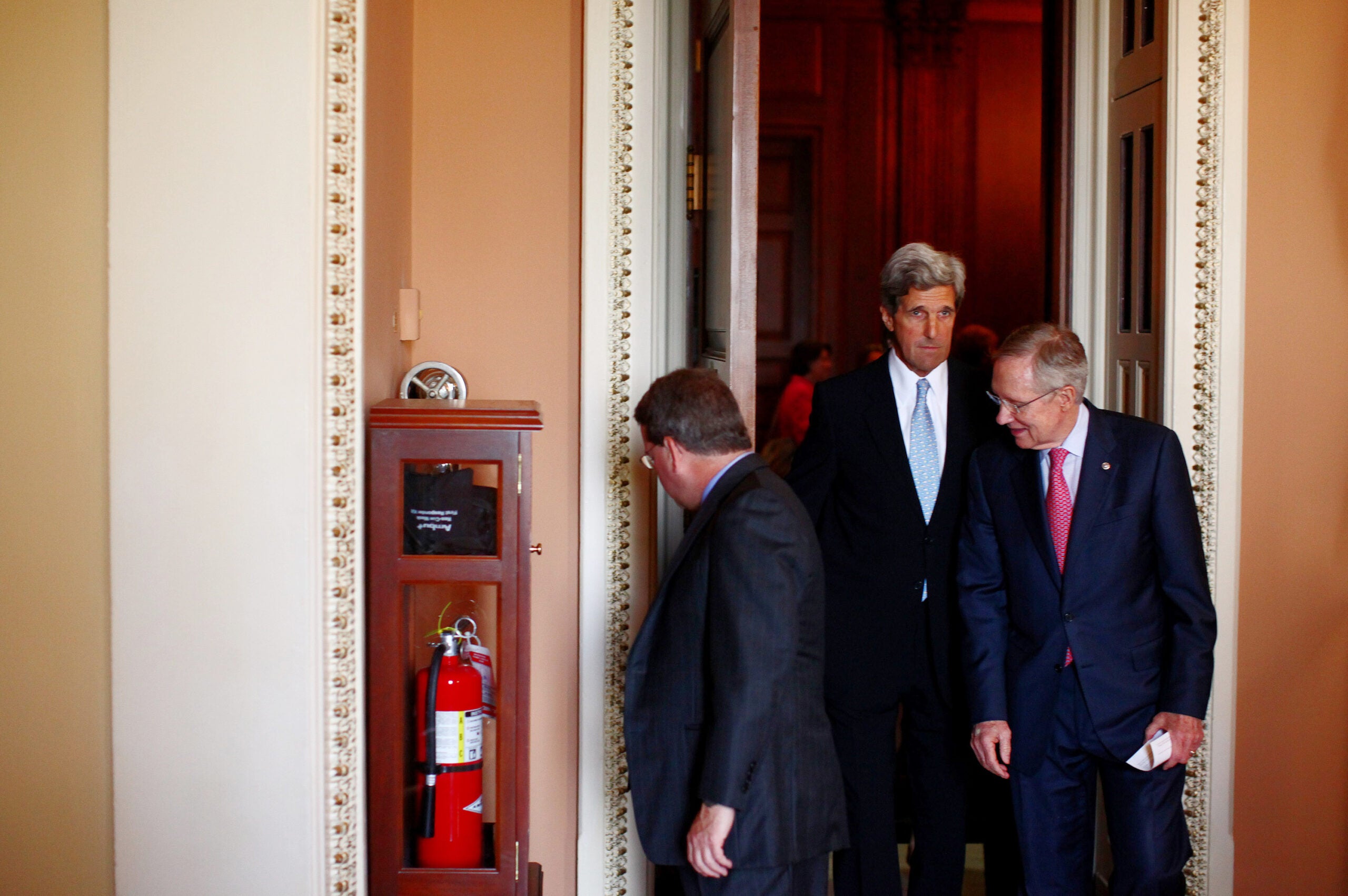 WASHINGTON — In 1969, President Richard Nixon’s adviser Daniel Patrick Moynihan wrote a memo describing a startling future. The increase of carbon dioxide in the atmosphere caused by burning oil, gas and coal, Moynihan wrote, would dangerously heat the planet, melt the glaciers and cause the seas to rise. “Goodbye New York,” Moynihan wrote. “Goodbye Washington, for that matter.”

Fifty-three years later, Congress is on the cusp of finally responding to what Moynihan termed “the carbon dioxide problem.”

On Sunday, Senate Democrats muscled through a $370 billion bill designed to move the country away from fossil fuels and toward solar, wind and other renewable energy. If the House passes the legislation later this week as expected, it will be the nation’s first major climate law, coming as scientists warn that nations have only a few remaining years to make deep enough cuts in carbon dioxide to avoid planetary catastrophe.

Once enacted, the new law is projected to help cut the nation’s greenhouse pollution by roughly 40% below 2005 levels by the end of this decade. That’s not enough to avert the worst effects of a warming planet, but it would be a sizable down payment and the largest climate action ever taken by the United States.

“Finally, now we have crossed a major threshold,” said former Vice President Al Gore, who as a lawmaker held the first congressional hearings on the subject in 1982 and shared the 2007 Nobel Peace Prize with climate scientists for their joint efforts to spread awareness about climate change. “I did not for a moment imagine it would take this long.”

In interviews, Gore and other veterans of the nation’s failed attempts at climate legislation pointed to several reasons that a climate bill is about to become law at last — passing the Senate by a razor-thin majority of 51-50, with the tiebreaking vote of Vice President Kamala Harris.

All said that the incontrovertible evidence that climate change has already arrived — in the form of frighteningly extreme wildfires, drought, storms and floods afflicting every corner of the United States — has helped build political support. Increasingly, the sheer volume of real-time data has overwhelmed the well-financed, multidecade strategy of oil, gas and coal companies to sow doubt about the severity of climate change.

But they also pointed to a shift in strategy, which set aside what experts consider the most efficient way to cut carbon dioxide emissions, a tax on pollution, for the less-effective but more politically palatable approach of monetary incentives to industries and consumers to switch to clean energy. Essentially, lawmakers replaced the sticks with carrots.

William Nordhaus, who first conceived of the carbon tax as a young economist at Yale University in the 1970s, wrote in an email, “Carbon taxes have proven a toxic mix with politics, although the toxicity varies across countries. Subsidies, by contrast, are catnip to the elected.”

President Joe Biden has promised that the United States will stop adding carbon dioxide to the atmosphere by 2050. All major economies must follow suit to constrain average global temperature rise to 1.5 degrees Celsius above preindustrial levels, scientists say. That’s the threshold beyond which the likelihood increases significantly of catastrophic droughts, floods, wildfires and heat waves. The planet has already warmed an average of about 1.1 degrees Celsius.

Without putting a price on carbon pollution, it will be difficult for the United States to meet its net zero 2050 goal, experts say.

“A carbon tax has been the dream of people who want to be good custodians of the planet for decades,” said Douglas Brinkley, a presidential historian. “But instead, the reality of American politics is that you give out a chunk of cash to stimulate new technology. It will not be enough to get to the 2050 goal. But it’s still the largest thing the U.S. has ever done on climate change.”

A few years after Moynihan’s memo to the Nixon White House, Nordhaus proposed an elegant solution: governments should put a tax, fee or some other price on carbon pollution.

He would later receive the Nobel Memorial Prize in Economic Sciences for showing that “the most efficient remedy for problems caused by greenhouse gases is a global scheme of universally imposed carbon taxes.”

By 1988, climate change had started making headlines. James E. Hansen of NASA told a Senate committee that human-caused global warming had already begun. The next year, Hansen testified before a Senate subcommittee chaired by Gore, who sensed momentum was building to pass a law to stop the planet from warming any further.

As vice president in 1993, Gore helped promote a measure that would accomplish the same thing as a carbon tax.

But after the bill passed the House, Republicans attacked it as an “energy tax” and the Senate never took it up. The following year, Republicans promised to lower taxes and reform government and won control of both houses of Congress for the first time since 1952.

“It was kind of crazy, because Clinton and Gore made the House vote for the thing even though it was suicide,” said Paul Bledsoe, who was a Senate staffer at the time and later worked in the Clinton administration. “That set back climate politics for more than a decade. It was politically devastating.”

Climate policy remained dormant in Washington until 2009, when President Barack Obama tried again with a “cap-and-trade” bill. While not a direct carbon tax, it would have placed a shrinking cap on the amount of carbon dioxide pollution that could be emitted each year and forced industries to pay for permits to pollute.

History repeated itself. The measure passed the House but within days Republicans labeled it an “energy tax.” Although Democrats controlled both houses of Congress, the Senate never took up the bill, unable to muster enough votes in their own party to pass it in the face of Republican opposition.

Sen. Sheldon Whitehouse, D-R.I., recalled Sen. Harry Reid of Nevada, then the majority leader, telling him in July 2010 that there would be no further efforts to move climate legislation.

Democrats had fought hard to enact the Affordable Care Act “and they didn’t want any more conflict,” Whitehouse said Reid told him.

The aftermath “was a long, grim period,” Whitehouse said. In 2012, he began making almost weekly speeches from the Senate floor, continuing to this day, warning about the dangers of global warming.

“I just decided, look, we’re not going to stop talking about climate change in this place,” he said.

In Obama’s second term, after Democrats had lost control of the House, the president enacted a series of regulations to reduce carbon dioxide pollution from cars and power plants.

Many Republicans were still expressing doubts that human activity was causing climate change, or even that the planet was warming at all. In February 2015, Sen. James Inhofe, R-Okla., famously held up a fat snowball on the Senate floor as proof that global warming was a hoax.

Shifting Politics and Another Chance

As efforts on Capitol Hill to address the climate crisis sputtered and stalled, the politics were beginning to shift, according to activists and lawmakers.

A major 2017 scientific report, the National Climate Assessment, detailed the economic cost of climate change, from record wildfires in California, crop failures in the Midwest and crumbling infrastructure in the South. Over the past five years the United States has experienced 89 weather and climate disasters with damage of more than $1 billion each, costing the nation a total of $788 billion and 4,557 lives, according to the National Oceanic and Atmospheric Administration. Last summer was the hottest on record in the contiguous United States, but it is on pace to be outstripped this summer.

By and large, Republicans stopped denying the planet is warming and instead objected to climate action on economic grounds.

At the same time, the plunging cost of natural gas and renewable energy has weakened the coal industry. Environmentalists forged alliances with groups they had previously sparred with, like unions and farmers. They began to talk about climate change not only as a threat to polar bears and coastlines, but also as an opportunity for the United States to develop a new economy untethered to fossil fuels.

“The movement had to mature,” said Sen. Brian Schatz, D-Hawaii, who fought back tears immediately after Sunday’s vote. “There’s plenty to catastrophize about, but that was no way to build political momentum. We started to try to answer the question, ‘What’s in it for me if we take climate action’ as a farmer, a surfer, a blue collar union worker.”

Biden took that cue, equating climate action with jobs when he won the White House in 2020, partly with help from a record turnout of young, climate-minded voters.

But Joe Manchin, the Democrat from coal-rich West Virginia and a crucial swing vote in an evenly divided Senate, would determine the limits of what was possible.

As Democrats sought to advance a broad spending bill that would include climate provisions, senators took one last stab at putting a price on carbon. They tried to include a measure that would have rewarded electric utilities that replaced fossil fuels with clean sources of energy and penalized those that did not. That provision would have enabled the United States to meet Biden’s long-term climate goals, and rapidly transform the nation’s energy sector.

With Manchin, Wyden instead designed billions of dollars in tax incentives for zero-emission energy sources such as wind, solar and nuclear and for electric vehicles.

Even then, the West Virginian’s vote was not assured. Manchin walked away from negotiations last winter, and when he restarted talks this summer, he faced an onslaught from Democrats and administration officials trying to win him over.

The final bill includes a modest short-term fee for excess methane, a potent greenhouse gas, emitted from oil or gas operations. But lawmakers abandoned a carbon tax, at least for now. Still, most Democrats called it a critical first step.

“A better world is possible. That’s been what I’ve worked for all these decades,” said Sen. Edward Markey, D-Mass., who wrote the failed 2009 cap-and-trade bill when he served in the House.

Democratic lawmakers said they expected the Biden administration would issue additional regulations to curb carbon pollution from power plants, automobiles and oil and gas wells. And some, like Whitehouse, said they hope that Congress would eventually approve a carbon tax, noting that a few Republicans, including Sens. Mitt Romney of Utah and Lindsey Graham of South Carolina, are willing to discuss it.

Whitehouse recently gave his 285th Senate floor speech on the climate crisis, speaking in front of the same worn green sign proclaiming “Time to Wake Up” that has served as a backdrop to his soliloquies for a decade. Despite finally witnessing the passage of major climate legislation, he has no plans to stop. “We’re still not on a pathway to safety,” he said.

Nordhaus agreed. “A journey does begin with a single step,” he said. “But if this is the last step, then we are in for a fiery future.”