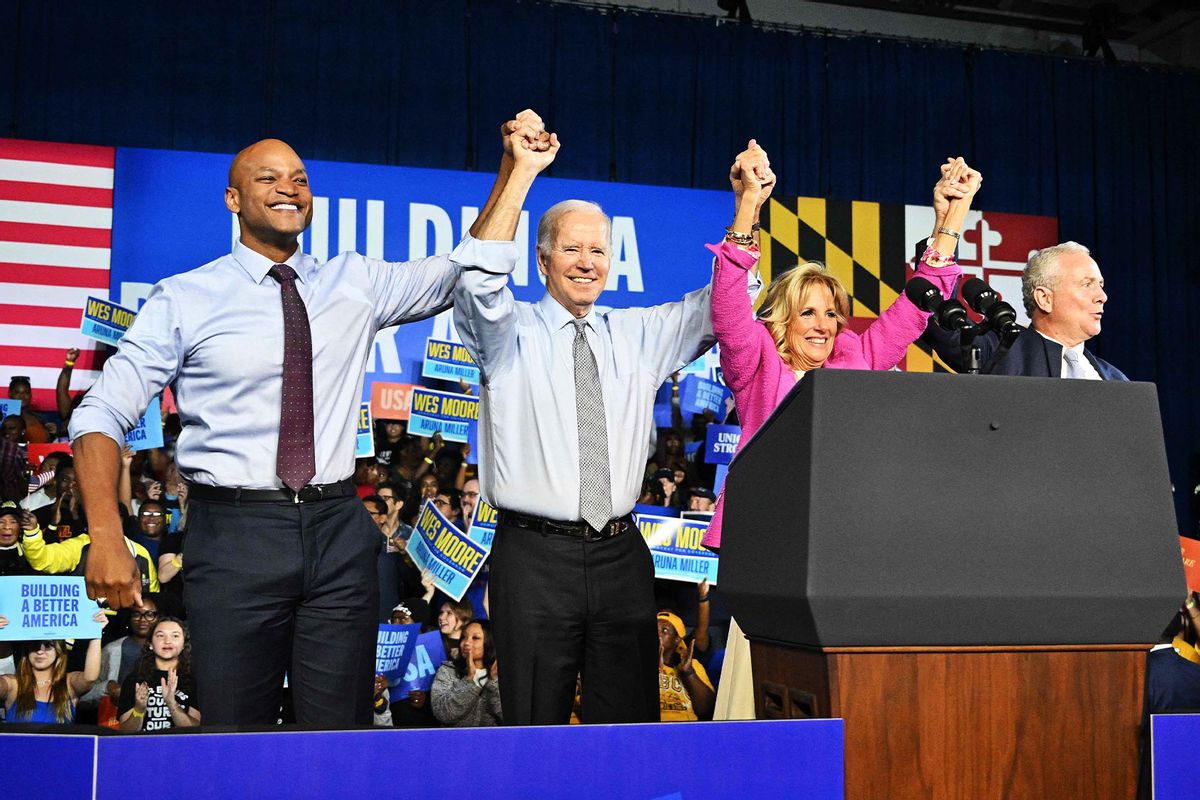 At 7:19 a.m. on November 10, when the Senate had already been called for the Democrats but votes were still being counted for the House, the Georgia Senate and several gubernatorial races, Marjorie Taylor Greene (R-GA) tweeted, “I am sure our enemies are quacking in their boots while we are still over here trying to count ballots.”

Greene is notable for her typos and gaffes. But the quacking — rather than quaking — in their boots tweet drew quite the twitter mockdown, including this memorable rejoinder: “Quacking? You’re a ducking moron.”

Later, when MAGA election denier Kari Lake lost the Arizona gubernatorial race, she tweeted, “Arizonans know BS when they see it.” Scores of Twitter replies decided to take that as her concession, especially March for Our Lives founder, David Hogg, who replied, “Explains why you’re not the next Governor.”

As we debrief from the 2022 midterm elections it would be easy to focus on these stories of MAGA absurdity and outrage over the absent red wave, but in the end, despite their never-ending ability to entertain, there isn’t much news there. For years the GOP has been out of touch with its own appeal to the public, constantly inflating the actual magnitude of its supporters. They seem to forget that one of the main reasons they have done so well in the House has been due to GOP gerrymandering, which was further helped by the recent redistricting.

So no, the story of the MAGA GOP loss is not really a story about losers, but rather about a party that has lost touch with reality. Instead, the real losers in the midterm election are the mainstream media, which not only blew its coverage of the election but also proved once and for all that it is more interested in getting attention than covering the news.

Let’s start with the myriad headlines leading into Election Day which anticipated, wrongly, that the GOP would win, and did so with a steady stream of hyperbole and exaggeration. CNN referred to the “bottom dropping out” for Democrats, a fast-building “Republican wave” and Democrat’s “nightmare scenario on election eve.” And that was just CNN. In a Washington Post column on how the media messed up their coverage, Dana Milbank observed that along with CNN, The Post, the New York Times, Axios and Politico ran equally absurd headlines.

The disparity between the news coverage and what actually happened on Election Day even led the White House to claim that the press had “egg on their faces, yet again.”

Milbank noted he was flabbergasted that the press kept touting the story that there would be a red wave, even when commentators like him had suggested that the “red wave might end up a ripple.” Michael Moore made his efforts to counter the red wave narrative into a mission, using his Substack blog, podcast and Twitter feed to launch a Tsunami of Truth, which he described as “A brief honest daily dose of the truth — and the real optimism these truths offer us …[that] an unprecedented tsunami of voters will descend upon the polls en masse — and nonviolently, legally, and without mercy remove every last stinking traitor to our Democracy.” In my pre-election writing, I noted that Moore may well have a point, especially because polling data tends to be so regularly wrong.

Milbank attributes the news media’s off-base coverage to two main flaws: political journalists paid too much attention to flawed polling data and they fell for the Republican false narrative that voters didn’t care about abortion rights as much as they worried over inflation.

Stuck in a rut

There’s no doubt he’s right, but the news media’s problems are more severe. Today’s news media simply refuses to recognize that the story of democracy in America is changing. It simply can’t be analyzed according to old scripts and predetermined storylines.

Notice how the fact that the Democrats had the best midterm performance for an incumbent gets buried?

This explains, for example, why the news media expected that the midterms would swing in favor of the GOP, since voter backlash against an incumbent party has historically been common. This is why Bloomberg could report the day before the election that “Efforts by the president and allies in Congress to steer the conversation to labor market recovery and other achievements aren’t gaining traction.” Milbank notes that that same reporter later tweeted a bit of a “corrective”: “Biden, despite his low approval rating and relative absence on the campaign trail, will likely be able to claim best midterm performance for an incumbent president’s party in 20 years.”

Wait. Stop and reread that last line. Notice how the fact that the Democrats had the best midterm performance for an incumbent gets buried? Then consider that we are actually immune to this type of negative talk about a party that has been outperforming media expectations for years. The point is the media has gotten stuck in a rut of endlessly suggesting that the sky is falling on Democrats when the facts show otherwise.

Not only does the news media fail to see the story of democracy in this nation is shifting and can’t be predicted using old models, but it also can’t stop being depressingly negative, even when the negativity is out of sync with reality. In reply, one commenter noted, “‘Biden, with an approval rating higher than trump’s ever was, can claim the best midterm performance for an incumbent President’s party in 20 years.’ There I fixed it for you!”

So, even when the reporting is more accurate, it still buries the facts, hiding them in a combination of negative, emotional and sensationalist rhetoric.

Any viewer tuning in to CNN was going to hear about the “magic wall” all night long.

Consider this. As the election results came pouring in, CNN coverage featured John King, as usual, who likes to break down the demographics of districts to help viewers understand how uncounted votes may come out. As Poynter points out, King’s analysis is actually pretty interesting and full of useful facts. But rather than focus on King as a source of information and insightful analysis, CNN fills its coverage with an endless stream of “key race alerts,” which over the course of the night become increasingly meaningless, because they signal no new information as they just run endlessly on the bottom ticker.

Even worse, despite the fact that King shares sharp analysis with the audience, CNN hides the objective truths he is offering by unironically referring to the digital map he uses as “the magic wall.” Seriously? What exactly is “magic” about a touch-sensitive screen that uses mapping technology?

There is literally no reason for the word “magic” to show up in the middle of election coverage. Not ever. And certainly not if you are trying to present your coverage as objective and trustworthy. Yet, any viewer tuning in to CNN was going to hear about the “magic wall” all night long. And this on a network that under new ownership was supposedly trying to tamp down its sensationalist coverage.

For years now, scholars of journalism have pointed out that the U.S. news media has been increasingly consumed by hyperbole and hype at the expense of facts. Yet, there seems little appetite in the industry to take the consequences of that type of coverage seriously. Exactly how long do we have to signal that the mainstream media’s all-you-can-eat buffet of hype, hysteria and hyperbole is anathema to the kind of serious reporting we need for a thriving democracy?

The more the news media loses touch with reality, the more the right wins

Milbank notes that one of the major flaws to the pre-election coverage of the midterms was that the press simply bought the GOP narrative that they were going to win.

But it’s much worse than that.

Somehow, possibly ever since Richard Nixon and Spiro Agnew went after the news media for liberal bias in the late ’60s, the news media has bought into the idea that they aren’t being fair to Republicans.

Rather than focus on getting information to viewers, journalists fret over whether they are offering the view from all sides.

So to fix that perception, they have given way more airtime and credence to MAGA Republicans than called for by objective reporting standards. And in many cases, they have literally let the right’s fact-averse version be the framework within which they report.

Norman Ornstein, emeritus scholar at the center-right American Enterprise Institute, noted that one of the most disturbing elements of election coverage was the way that the press has succumbed to “both-sidesism,” where they handwring to make sure they are covering all sides to a story. “There are so many in the mainstream press that are just fearful to a remarkable degree of being branded as having a liberal bias,” Ornstein explains, “And what we see is that the reaction to that is to bend over quadruply backwards to show there is no bias.”

This absurd drama has been playing out in the U.S. news media for decades. Stephen Colbert used to joke on “The Colbert Report” that “reality has a well-known liberal bias.” Somewhere along the way, if Republicans disagreed with the facts, reporters felt they had to cover the fact that they didn’t agree with the facts.

It’s enough to give you a headache.

But it’s worse, because rather than focus on getting information to viewers, journalists fret over whether they are offering the view from all sides. The problem, though, is that if your “side” is that the 2020 election was fraudulent, it simply doesn’t deserve major media attention because your view is just flat-out wrong.

But that’s not what happens. Instead, the news media seems more interested in being tough on liberals to “balance” its toughness on the right. They fall into a balance/false balance rabbit hole they can’t seem to escape and they get stuck worrying more over possible bias in reporting than accuracy.

As long as the news media allows itself to get trolled by the right instead of taking seriously its role in supporting a functioning democracy, we are going to have to expect it to consistently get the story wrong. And just like the Arizonans who didn’t vote for Lake, those of us watching the news coverage are going to have to keep telling the press that we know BS when we see it.