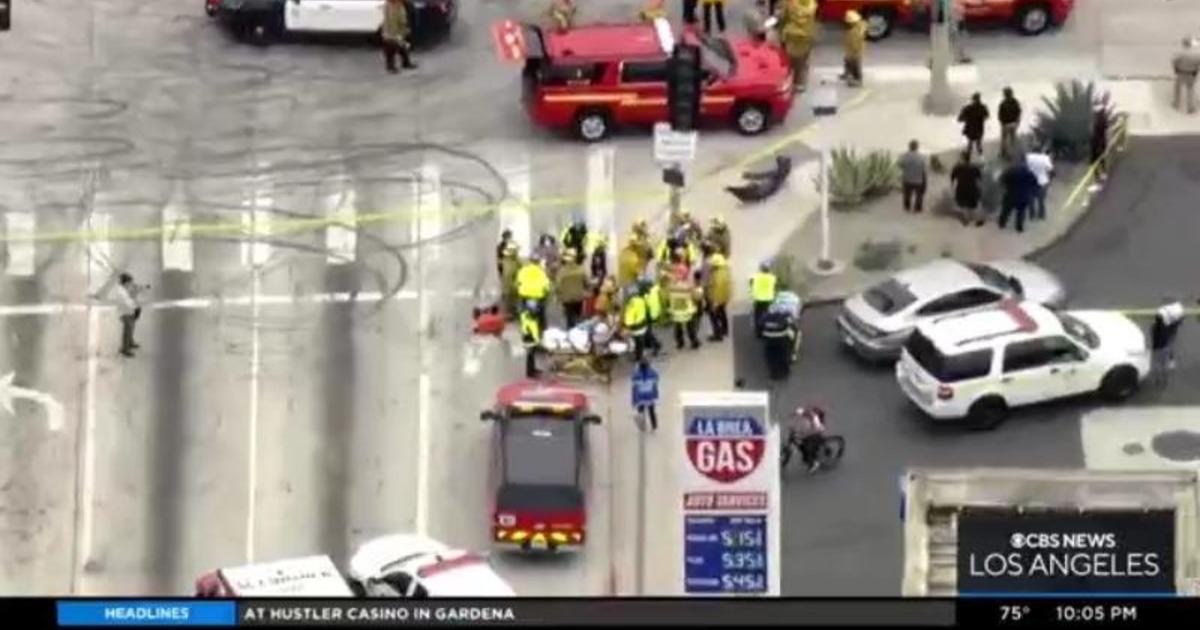 The woman arrested by the California Highway Patrol following a crash in Windsor Hills Thursday that killed six people has been released from the hospital and is now in Los Angeles County Sheriff’s Department custody at the Century Regional Detention Center.

She is being held on $2 million bail.

Nicole Lorraine Linton, 37, a traveling nurse, was arrested on suspicion of vehicular manslaughter with gross negligence. She’s hospitalized with moderate injuries at Ronald Reagan UCLA Medical Center, according to the California Highway Patrol.

District Attorney George Gascón said Friday that his office would be “working with law enforcement throughout the weekend,” and the investigation could be presented to his office for consideration of charges “as early as Monday.”

Families of the victims and neighbors are mourning after six people, including an infant and a pregnant woman, died in the fiery multi-vehicle crash.

The pregnant woman who died in the crash was identified Friday by the coroner’s office as 23-year-old Asherey Ryan of Los Angeles. She and her male fetus were among the victims killed in the crash that occurred just before 1:40 p.m. Thursday at La Brea and Slauson avenues, near Ladera Park.

According to Ryan’s family, the woman’s 11-month-old son, Alonzo Quintero, was also killed, along with Ryan’s boyfriend, who was the father of her unborn son. Ryan’s boyfriend was driving the car that was struck, according to a video posted online by Ryan’s sister, Shoshanna Kerr.

Kerr identified him as Reynold Lester, 24, of Los Angeles, who worked as a security guard.

In the video, Kerr said Ryan was 8 1/2 months pregnant, and she was on her way to a doctor’s appointment when the crash occurred.

The family was planning to name the unborn infant Armani Lester, according to the Los Angeles County coroner’s office.

“She left the house at 1:30. She woke me up,” Kerr said. “She woke me up and told me she was going to go to her doctor’s appointment, that she loved me and she’ll be right back.”

Eight others, including six kids and two adults, suffered minor injuries and were transported to the Ronald Reagan UCLA Medical Center. Another person was treated at the scene.

“It was seeing the kids, that’s what got to me,” said Alphonso Ward through tears, who witnessed the crash. “The children. They never had a chance. Thinking about that mother who was probably happy to be having a baby. But she’s gone.”

The Los Angeles County Fire Department responded to reports of a fire at 1:41 p.m. near Slauson and La Brea Avenue.

According to the CHP, the driver of a gray Mercedes ran a red light on La Brea Avenue, at Slauson, and crashed into about a half-dozen other cars.

The Mercedes and another vehicle then burst into flames as they came to rest on the sidewalk.

“The flames just went over everybody,” said Debra Jackson, one of the victims in the crash. “The flames went over my whole car.”

The Mercedes-Benz was driven by a 40-year-old woman who was being treated at Ronald Reagan UCLA Medical Center for major injuries, according to the CHP. Her name was not released.

She remained at the hospital through Friday for treatment, though upon release authorities were waiting to arrest her and charge her with vehicular manslaughter and gross negligence.

A memorial grew throughout Friday, as residents stopped to leave flowers or light candles for the victims.

“This is a catastrophic situation that’s taken place in our community,” said Pastor Eddie Jones. “I cried all night.”

He lit six candles himself, one-by-one, to pay respects.

“Even if we don’t know them, they’re all family,” he said.

Among the other people who were at the memorial on Friday evening was the father of 11-month-old Alonzo, who was among the six victims killed along with his mother Asheray Ryan.

Louis Quintero, Alonzo’s father, spent time at the memorial mourning the loss of his son.

“He had the sweetest smile, the most beautiful smile in the world. He didn’t deserve that,” Cotie Davis, Ryan’s sister said.

Angelo Ortiz, who works next door to where the crash took place, also visited the memorial to pay his respects. Ortiz witnessed the crash and its aftermath.

“Life that was about to begin, you know. He never got a chance, you know, at life,” Ortiz said.

Karra Bikson, who lives just down the street from the scene, was among those who stopped to offer their condolences, including thoughts for the woman who caused the crash.

“I have no doubt she didn’t mean to do that, she’s gonna suffer from that the rest of her life,” she said.