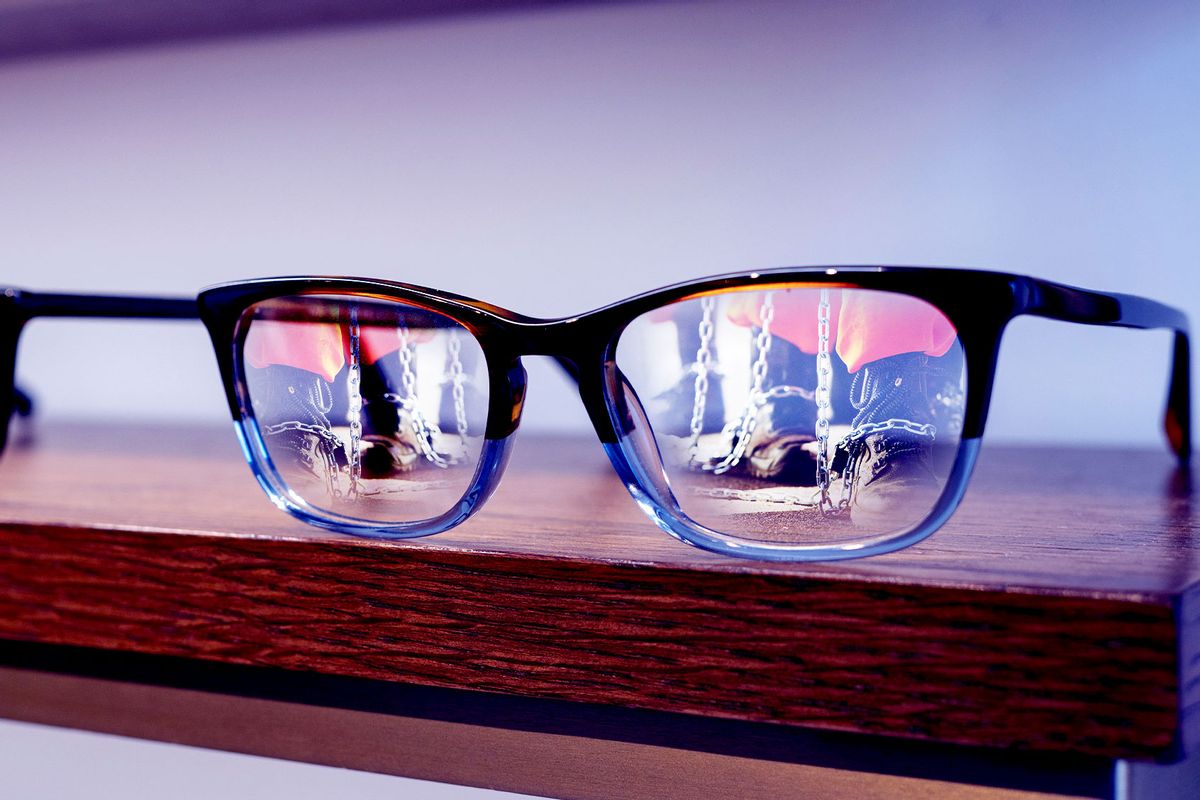 When Sovannarie was 3 months old, her parents noticed something unusual about their daughter: white opacities in both pupils. Without cataract surgery — and soon — doctors predicted irreversible vision loss. Even if that procedure went perfectly, Sovannarie would need glasses to rehabilitate her eyes and prevent blindness.

A decade and many operations later, Sovannarie needed new glasses again, her mother Ranny Un explains. She got them for free through the state — what on its surface seemed like a genuinely positive social program.

But there is a more sinister side to these free glasses, as a recent editorial in the American Journal of Public Health attests. Its authors contend that pediatric eye doctors who serve lower-income families in California — as well as those in other states — are unwitting supporters of exploitative prison labor. Consider these facts in light of the history of forced labor in this country, and kids’ glasses start to look a lot like cotton.

Un has family members who are incarcerated. She sees the unknown hands that created those lenses as belonging to real people, people who “deserve to do something they like.”

Who buys the glasses CALPIA produces with incarcerated people’s work? For the most part, it’s California’s Department of Health Care Services (DHCS), the entity that provides lenses to Medicaid recipients, like Sovannarie. During the 2021-22 fiscal year, DHCS paid CALPIA $37.9 million, according to records Oatts, Hutt, and de Alba obtained with a public records request. The incarcerated workers who produced that nearly $40 million in goods were paid “between $0.35 and $1.00 per hour … up to 55% of which can be deducted by law for restitution and administrative costs, resulting in an effective pay rate as low as $0.16 per hour,” they write.

That’s 16 to 100 cents an hour for a job many didn’t really choose to take in the first place and now perform without the guarantee of basic workplace protections. It doesn’t sound constitutional, but it is. The Thirteenth Amendment, which banned slavery, explicitly excludes incarcerated persons and allows governments to require them to perform labor without compensation.

Which brings us to Alabama. On a mural that covers the long side of a white-washed brick building near the Equal Justice Initiative’s headquarters, a Maya Angelou quote is painted in crisp black lettering: “History, despite its wrenching pain, cannot be unlived, but if faced with courage, need not be lived again.” Around the corner, the Legacy Museum, a brainchild of “Just Mercy” author Bryan Stevenson, is a stunning piece of advocacy work for a controversial, and seemingly impossible, statement: Slavery never ended. It just evolved.

In her bestselling memoir “Educated,” Tara Westover writes about learning U.S. history for the first time as an adult: “[W]hen Dr. Kimball began to lecture on something called the civil rights movement[, a] date appeared on the screen: 1963. I figured there’d been a mistake. I recalled that the Emancipation Proclamation had been issued in 1863. I couldn’t account for that hundred years, so I assumed it was a typo.”

“If making glasses is their choice … then I feel like they are doing something worth making other people’s lives happy.” But she worries that’s not the case.

Few Americans know about “convict leasing” after the Civil War, “a horrific system in which black people convicted of largely social crimes that applied only to them” — anything from using inappropriate language with a white woman to walking on the sidewalk while Black — “were leased to private businesses who forced them to labor under inhuman conditions,” sometimes on the very plantations they’d worked when enslaved, in the Equal Justice Initiative’s words. Others were exploited as tenant farmers, with debt taking the place of chains. These individuals did not experience freedom, nor did many of those who’d headed North, leaving behind families, homes, land, and businesses to escape the threat of lynching, only to find new forms of discrimination there. All told, Jim Crow laws denied millions of Black Americans the education, employment, and housing opportunities necessary for true liberation.

Most history books still suggest the Civil Rights Movement changed all that, but Stevenson disagrees. Fewer than 200,000 people sat in U.S. jails and prisons in 1972. Then the “tough on crime” rhetoric of the 1980s and 90s produced a ballooning of rules and punishments for drug possession and trafficking. By 2016, 200,000 had increased to 2.3 million. While only 5% of the world’s population resides in the US, nearly 25 percent of the world’s prisoners are in the US. This carceral gluttony deprived 2.7 million children of a parent in 2010, according to a report from The Pew Charitable Trusts.

Nationally, Black defendants are at least five times more likely than white ones to be sentenced to prison for the same crimes. Before the pandemic, five states — Iowa, Minnesota, New Jersey, Vermont, and Wisconsin — incarcerated Black people at a rate 10 times that of white people, according to a 2016 report from The Sentencing Project, a Washington D.C.-based nonprofit. A 2021 update lists 12 states where more than half the prison population is Black. Nationally, despite only 13% of the U.S. population identified as African American, pre-pandemic numbers from the Bureau of Justice Statistics showed that 38% of state prisoners were; in Maryland, that number was a whopping 72%. More than 1 in 3 Black baby boys born in 2001 can expect to go to jail or prison in his lifetime, calculates a 2013 shadow report to the United Nations. Once there, research suggests they’ll have a significantly higher mortality rate.

Several state lawmakers recently proposed just that in California, putting forward a change to the state constitution that would ban all forms of involuntary servitude.

CALPIA glasses being produced by a group that is disproportionately Black and Brown is just one more connected dot. And it’s a connection that shocked Un, who is Cambodian. She didn’t know Sovannarie’s glasses were made in prison. Un has family members who are incarcerated. She sees the unknown hands that created those lenses as belonging to real people, people who “deserve to do something they like.” Un says, “If making glasses is their choice … then I feel like they are doing something worth making other people’s lives happy.” But she worries that’s not the case.

The editorial’s authors arrive at a similar conclusion. They acknowledge potential benefits of the system for those in prison: learning marketable skills, having a meaningful opportunity to contribute to society, and building a record of service for parole hearings. But they ask, “How meaningful is a benefit that one is forced to accept?” especially when the state could budget to provide glasses to poor children in a way that doesn’t exploit incarcerated human beings, most of whom were once poor children themselves.

Several state lawmakers recently proposed just that in California, putting forward a change to the state constitution that would ban all forms of involuntary servitude. It’s a move Colorado made in 2018 and one the ACLU called for in a 2022 research report produced in collaboration with the Global Human Rights Clinic of the University of Chicago Law School. According to “Captive Labor: Exploitation of Incarcerated Workers,” two thirds of incarcerated people are also workers. Seventy-six percent of them “report that they are required to work or face additional punishment such as solitary confinement, denial of opportunities to reduce their sentence, and loss of family visitation, or the inability to pay for basic life necessities like bath soap.”

The report identifies five types of penal labor. In addition to state prison industries like CALPIA, the legacy of convict leasing extends to 1) maintenance work that keeps prisons running and masks the true cost of mass incarceration, 2) public works assignments, a.k.a., “community work crews” or “work release,” that maintain public parks, do road work, clean up hazardous spills, and respond to natural disasters like wildfires and Hurricane Harvey, 3) work for private companies, and 4) agricultural work.

And the benefits of this work aren’t as touted. Though “state governments describe their prison labor programs as rehabilitative,” the report’s authors conclude, “the vast majority of work programs in prisons involve menial and repetitive tasks that provide workers with no marketable skills or training.”

The California Assembly passed the proposed bill, ACA 3. But the Senate rejected it as fiscally prohibitive.

“The CA State Senate just reaffirmed its commitment to keeping slavery and involuntary servitude,” tweeted state Senator Sydney Kamlager in June. She added sarcastically: “Way to go, Confederates.” A later attempt to pass the bill off the Senate floor failed, and Kamlager released a statement referencing her enslaved great-great-grandmother. She also referenced formerly incarcerated people who have been “coerced, threatened and punished for wanting to learn or rehabilitate rather than work an appointed job.”

Should that be okay? Two papers on studies of 6- to 8-year-olds published in 2020 and 2021 by psychology scholars James P. Dunlea and Larisa Heiphetz suggest that children and adults alike report “a great deal” of negativity toward incarcerated people, inferring that they’ve ended up in prison because of their bad behavior. Kids also tend to assume prisoners have bad character and, essentially, bad genes. When the children studied were told that a hypothetical individual’s incarceration owed instead to external, structural factors — like poverty — they reported more positive attitudes toward that person. In other words, our moral willingness to force a person to work for free or compensation that’s so low it’s functionally nonexistent, depends on continued ignorance or denial of racial disparities in the justice system.

Experts like Oatts, Hutt, and de Alba see the situation with these glasses as “strange,” and perhaps in violation of the Hippocratic Oath that physicians take. They call for “public health officials, researchers, and physicians to address the sprawling reach of the prison industrial complex.” In California, that could mean ordering Medi-Cal glasses from a private entity. (Medi-Cal is the state’s implementation of Medicaid.) On September 25, 2022, Governor Gavin Newsom signed SB 1089, giving that option to providers like Oatts, who is Sovannarie’s doctor and an assistant professor of ophthalmology at the University of California, San Francisco. But eye doctors in other states, including Pennsylvania and New York, remain in an ethical bind.

For them, first doing no harm could require petitioning hospital systems and organizations like the American Medical Association to take a stand against exploitative prison labor alongside the ACLU. It could mean an ethical obligation to support efforts in other states, to replicate Colorado’s reform, like Utah, Nebraska, Oregon, Tennessee and Vermont have.

As Oatts says: “There has to be a better way which respects the needs of both vulnerable populations, publicly insured children and incarcerated individuals.”